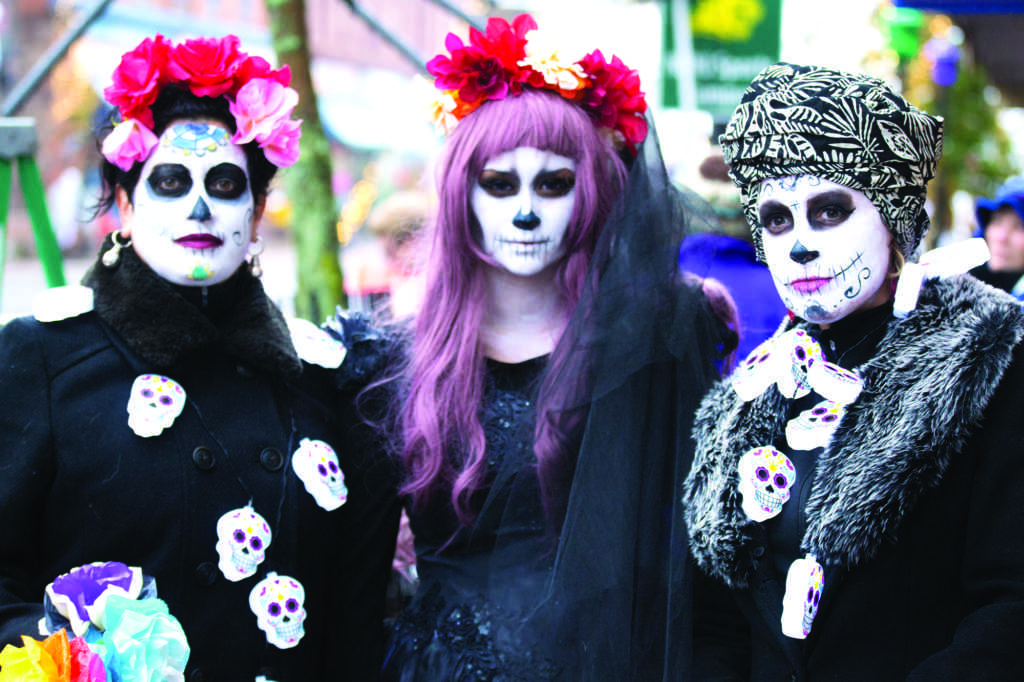 Returning this weekend to scare the bejeebers out of the NMU community, the ninth annual “Haunted Theatre” will transform the Forest Roberts Theatre into a house of frights.


Customers in search of a scare will wander through a dark labyrinth of claustrophobic corridors and rooms of spooky scenes featuring tormented souls, like actors impaled on pikes and tortured in an electric chair.

“We have a lot of new and exciting things,” said Bill Digneit, director of theatre communication and performance studies. “Tons of zombies and clowns and things to scare you.”

Some of the new aspects include warming tents outside the FRT to keep the long lines of people waiting comfortably and a limited number of fast passes for customers willing to pay extra money to hop to the front of the line. The show is accessible to everyone

and accommodations can be made for allergies or other possible concerns, Digneit explained.

The show is a fundraiser for the First Nighter’s Club, which funds scholarships and FRT improvements. About 60 students are participating in the performance as actors and technical crew.

For Caitlyn Beyer, a senior theater major, this is her second year as an actor in the Haunted Theatre. This year she plays a living doll in a dollhouse scene, in which dolls play with people.

Beyer has done a lot of backstage work at FRT productions and also some on stage. She pointed out the difference between acting in plays and acting in the house of horrors.

“It’s very personal,” she said. “When you’re on stage, they’re off in the audience. But in [Haunted Theatre] we’re right in their face.”

Martyn Martello is the director of the Haunted Theatre and has been since its start. He’s been active in the local theater community, directing and producing shows, including some at the FRT’s Panowski Black Box Theatre.

Customers can always say the code word “macaroni” if they get too scared and want out of the maze, Martello explained. The actors stop, and someone in plain clothes ushers the scared person out.

“That’s a badge of honor too. We like it when we macaroni people out,” Martello said with a cackle. “One of the fun things is when you have this 5-foot-2-inch girl and this 6-foot-5-

inch guy who’s 2 percent body fat, all muscle, and he’s using her as a human shield because he’s terrified and he’s hiding behind his little girlfriend. It’s awesome.”

Tickets are only available at the door and are $5 for children and NMU students, $10 for all other adults. All performances are rated PG-13. Parental supervision is required for kids 7 and under.

“This is the best adult-themed Halloween scare in town. Period,” Martello added.

The Halloween Spectacle
By Kara Toay

Performers from dancers, to drummers along with community members dressed in costumes ranging from mimes to ghosts will parade once again down Washington Street to Harlow Park for the sixth annual “Halloween Spectacle” on Saturday, Oct. 28.

Though the date is set, the event may be rescheduled for either Sunday Oct. 29 or the next weekend depending on weather conditions.

The free event will kick off with a sidewalk procession from West Washington to Harlow Park that will take place from 6 to 6:30 p.m. after trick or treating downtown. From there, an hour-long performance of dancers, drummers and other bands will grace the stage on Bluff Street, said City of Marquette Arts and Culture Manager Tiina Harris. Spectators can bring tarps or blankets and place them along the hillside on Bluff Street. An hour long performance will proceed the procession followed by dancing on the stage.

This year, the U.P. Poet Laureate Marty Achatz will recite a poem he has written based on the theme of this year’s Spectacle, the elements earth, fire, air and water. The queen of each element will have a throne on the stage.

“There’s kind of this interesting theme of the environment, the world, unity and working together, which is really nice,” Harris said.

There are performers of all ages in the spectacle, Harris said. Most of the performers have graced the stage before, but a lot of the event surrounded by fantastic costuming, and added some people have called it “Yooper Mardi Gras.”

“I would say [it’s] more than scary, it’s more kind of fantastic and magical. [There’s] a lot of really involved makeup, a lot of involved beautiful costumes,” Harris explained.

The Spectacle also features a lot dancing as well, Harris said. There will also be a lot drumming by the band Log Jam, which has participated in the Spectacle all six years. Other performers will also take the stage, with fire dancers heating things up at the end of the night.

Large puppets will also be in attendance. The dragon, one of the main puppets, will be red this year after receiving a makeover from students at NMU. The dragon has also been green and blue in years past.

There has also been a lot of student involvement, from students participating individually in groups, Yooper Hoopers, a group dedicated to hooping and dancing, to dance clubs, such as the NMU Dance Club that participated last year, and cheerleaders.

“The event is about community. It’s about a community having an art experience together, bringing people together. It’s a chance for everyone to get together and have a collective experience,” Harris added.

The event is funded by the city, Marquette Downtown Development Authority and Rotary Club. For more information about the event visit marquette365.com or the City of Marquette Arts and Culture Center’s Facebook page.

Spectacle goers can expect extravagant costumes like the ones above and are encouraged to dress up themselves.

The Halloween Hootenanny
By Zoe Maki

Are you looking for an excuse to break out your dancing shoes? To socialize and snack on scrumptious foods? Then put on your best costume and drop on by, because the Halloween Hootenanny just might be the place for you.

The Halloween Hootenanny will be a costume-themed dance party from 7 p.m. to 11 p.m. on Saturday, Oct. 28 at Water’s Edge Church on Presque Isle Avenue.

This event is hosted by students from Northern, Michigan Tech and Finlandia University who are members of the Campus Crusade for Christ (Cru) — a student-led campus ministry.

“I went last year, and it was a lot of fun. I’m looking forward to dancing and having a good time. It’ll be nice to just goof off and dance,” said junior and biochemistry major Shelby Roesner, member of NMU Cru, “There will be no alcohol. It will be just a good time to bring your friends.”

As stated in the description on NMU Cru’s Facebook page, “There will be square dancing, swing dancing, line dancing and probably a good deal of uncoordinated, awkward dancing!”

As far as food is concerned, many students from the organization are bringing dishes to pass including plenty of cookies, chips and other delicious snacks.

Though the Hootenanny is led by a campus ministry, anyone who has an interest in dancing, costumes or food is welcome to attend.

NMU Cru is open to all students. All events are planned by students and the group’s weekly 8 p.m. Thusday meetings usually feature student speakers. Bigger events include the Hootenanny and the Snowball, a similar dance and smorgasbord, held in December. Along with dances, there are fall and spring retreats for students. For more information on the Hootenanny or Cru, visit NMU Cru’s Facebook page.