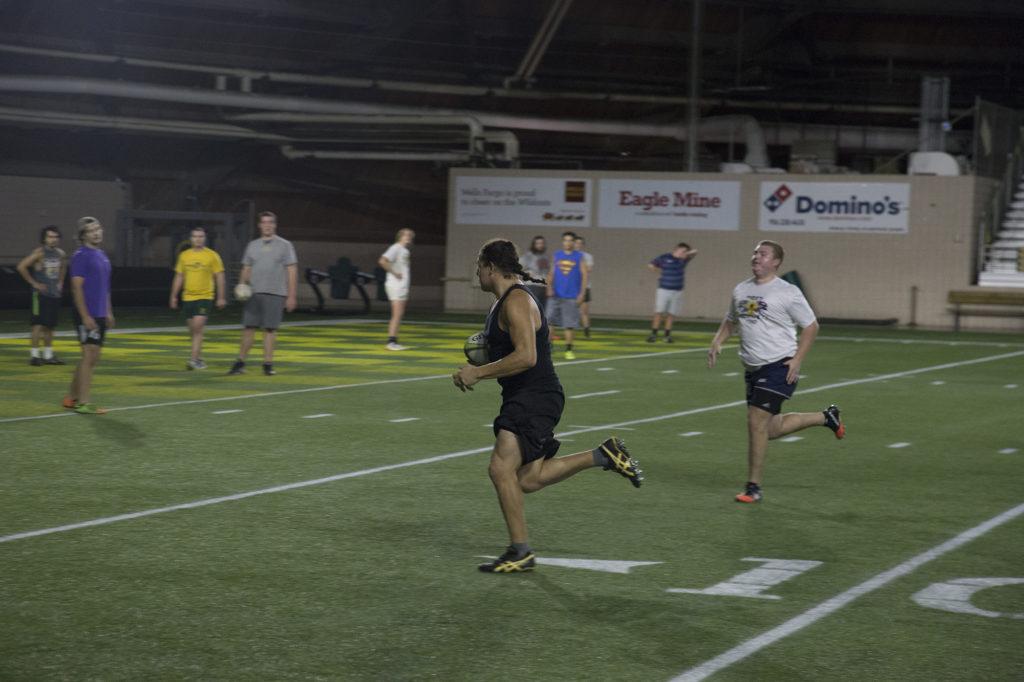 Photo by Neil: Senior English writing major Alberto Flores runs with a Rugby ball also known as a “quanco.” A traditional quanco is made of pig bladder and is diamond shaped to make it easier to throw.

University club sports often go unnoticed, but one NMU club team is changing that. The Northern Michigan University Men’s Club Rugby Team, also known as the Moosemen, currently ranks in ninth place out of the Goff Rugby Reports 50 nationally recognized Men’s college rugby teams. After sweeping UW-Whitewater 52-0 at their last game, the team is headed to the second round of playoffs where they will play Cottage Grove Rugby Club in Wisconsin in hopes to move on to play in the national qualifiers.

Icing Whitewater was no easy task. It took a team mindset that Captain and senior, construction management major, Patrick Bailey hopes to see the team carry with them to the play offs.

“It was 35 degrees, 30 mph winds and snowing or raining the entire game, so it took quite the mindset before the game and during the game to keep everybody alive, keep the spirits high, keep the blood flowing. We were sitting at the field for over an hour freezing cold, just wanting to go out there and play,” Bailey said. “We let everyone know everything was on the line. If we didn’t win that game, we were done with the season and no one really wants to be done, so it was do or die.”

The success of this team thus far can be attributed partially to their sense of camaraderie, one that is unique to any other, Bailey said.

“I’ve never played against a team where, during the game, everybody wants to kill each other and then right afterwards, you go out and have a drink with the other team, hang out, play games and talk about the hits you had in the game,” he said.

Teammate and senior English writing major, Alberto Flores agreed that playing on this team has helped him develop bonds that will last a lifetime.

“This brotherhood, I’ve never seen in any other sport, from football, to wrestling, to basketball, to track. I’ve never seen anything like it. There’s such a close bond,” Flores said. “Everybody’s just got each others back. If we’re down and out and out of our luck, we always know that one of our guys here can help us out when we need it.”

The rugby team is a diverse band of brothers too, each player of different physical stature and comes from a different background.

“We have all kinds of characteristics here. You have to have an open mind. I mean we have construction, we have nursing majors, we have kids on probation, and kids that are really intelligent. We have all kinds of people,” Flores said. “No one of us fits into one category at all, we’re all a crazy bunch of S.O.B.’s out here having fun.”

While being on the team has a lot to offer, playing a sport and being a student comes with its challenges. It takes dedication and a strong work ethic to commit to a team where the practices are not necessarily mandatory, but is still doing so well competitively, Bailey said.

“It’s a huge deal. We’re ranked behind some of the well known teams in the nation that have been there forever. We have not been known to be a top team ever, so bringing this group of guys together and being able to be ranked ninth, it’s a big deal to me and such an honor to be able to end the season that way,” Bailey said.

He added that his team is playing at the varsity level, but doesn’t receive any funding. This challenge is combatted with the hard work of the rugby team and the dedication of their coach, Bailey said.

“I couldn’t be more proud of the team and my coach. That is an unpaid coach that takes time out of his day to come out and practice with us and comes to our game on his own dime, which is huge. It takes everybody, the coach included, to get us to have that ninth ranking, so it means a lot.”

Bailey hopes his team will win at least one of the playoff games coming up to continue on further than the have before.

“The season ends when we lose. This weekend, win one of two games and move on from there. It’s sudden death elimination from then on, until the national championship.”