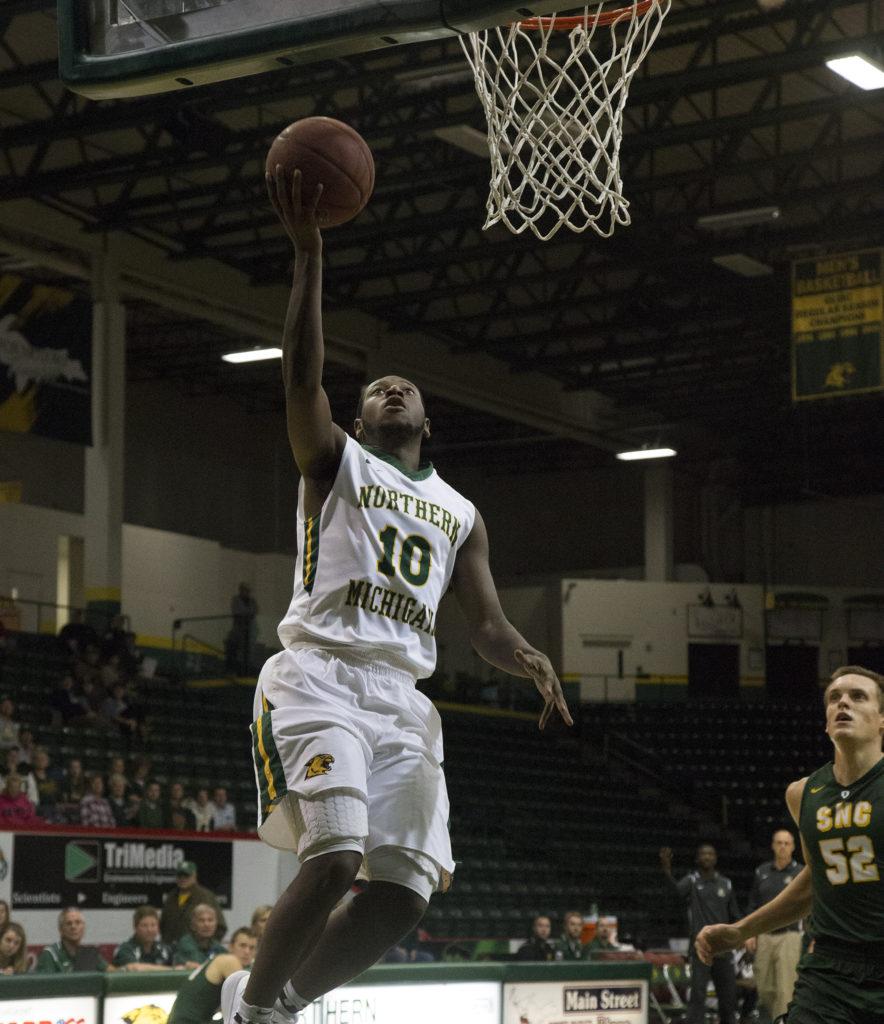 Photo by Neil Flavin: Sophomore guard Ian Hodges gets past a St. Norbert player in Saturday’s game and goes in for an easy layup off a fast break.

The NMU Men’s Basketball team dominated both of their home exhibition games this past weekend, defeating St. Norbert College 73-58 on Saturday afternoon and then following up on Sunday with a 107-68 blowout over Bay College.

The Wildcats were led by sophomore forward Will Carius, who earned 15 points, including 5-5 from the free throw line and junior guard Naba Echols, who chipped in with 10 points and earned the team-high of three assists along with two steals on Saturday.

Senior guard Jordan Perez effectively crashed the boards for the Wildcats to lead the team in double-digit rebounds and NMU shot a collective 53 percent from the field.

Head coach Bill Sall said, “I don’t think we played particularly well at all in the first half and then stretched together a couple of good runs in the second.”

The Wildcats returned to the Berry Events Center the following Sunday afternoon and delivered a 32-point blowout to Bay College. Sunday’s victory came during the NMU Student Athlete Advisory Committee’s Trick or Treating event, where free admission was granted to eighth grade students and under who attended the game in a costume.

The ’Cats had an outstanding input from their bench on Sunday and nearly the whole team managed to score. Freshman forward Dolapo Olayinka led the team to victory with 21 points and a 9-13 shooting average. Freshman guard Alec Fruin was another big contributor with 17 points, including five three-pointers and senior guard Eddie Tornes chipped in with 12 points.

“We were able to get a lot of guys playing time, which is what we wanted to do,” Sall said about Sunday’s performance. “We got a lot of freshmen a lot of time and they did a good job.”

The Wilcats shooting proved superior to the Norse in Sunday’s game as they shot 65 percent from the field and 60 percent from the three-point line before the second half. The Wildcats also forced their opponent into 24 turnovers, some of which came as a result of 13 steals the team was able to create for themselves.

The Wildcats will now prepare to start their season on Nov. 11 when they go against Lewis University at Michigan Technological University in Houghton. The game will be a part of the GLIAC/Great Lakes Valley Conference Challenge.

“This is really like our third game where we want to make it as game-like as we can,” Sall said. “So here’s our rotation—it’s set—and we’re going to go through that rotation certainly for the first 20 maybe even into the second 20 minutes, to really shore that up, so that we’re really confident going into the game at Tech with the players that we feel are going to play on this roster.”