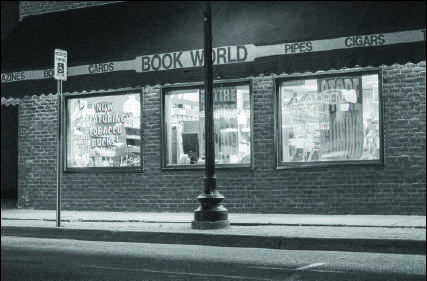 Photo by Lindsey Eaton: Bookworld, pictured above, is closed for the night and soon to be forever. This is one of seven locations in the Upper Peninsula where the store has had a fair amount of success over its years in the community.

Book World, a major store in downtown Marquette for the last 27 years, will close its doors due to the shutting down of the
company.

The Appleton, Wisconsin-based company Book World is shutting down all 45 of its stores, seven of which are based in the Upper Peninsula, across seven states, due to its inability to compete with retail markets associated with e-commerce.

Book World currently has a store in downtown Marquette that is forgoing a liquidation sale, offering anywhere from 20 to 40 percent off some of its original priced items. Other states with closing locations include Wisconsin, Minnesota, Missouri, Illinois, Iowa and North Dakota.

Keith Greising, the manager of Book World, expressed concern for the business of downtown Marquette with the store’s closing.

“For 27 years, we were sort of an anchor for business downtown,” he said. “And now, downtown Marquette is losing a vital business.”

Emily Smith, a Book World employee here in Marquette, said the store will be a loss to Marquette, because it was a store that had something for everybody.

“The sentiment between every person I’ve been talking to is how much people here in Marquette are going to miss it,” she said.

Although the store is getting traction from the liquidation sales, many residents around the Upper Peninsula have expressed a sense of remorse for its closing, Smith
mentioned.

One of Book World’s regular shoppers is owner of the Dia de los Tacos truck, Mike Walker. He said he liked to frequent the store due to its variety of periodicals and it being open on Sunday mornings.

Walker expressed a desire to see the bookstore soon purchased and turned into a localized community space in which he believes bookstores should be.
Several NMU students and professors would also frequent Book World, including James McCommons, an English professor who teaches journalism at NMU. He said he would take students in his EN407: Feature and Magazine Writing class to the store to expose them to the large number of magazines and opportunities to freelance their work.

“I don’t know of another place in town that has that kind of selection of periodicals,” McCommons said. “When you’re teaching a magazine class, it’s important to have the students get a chance to see that there are lots and lots—hundreds of magazines.”