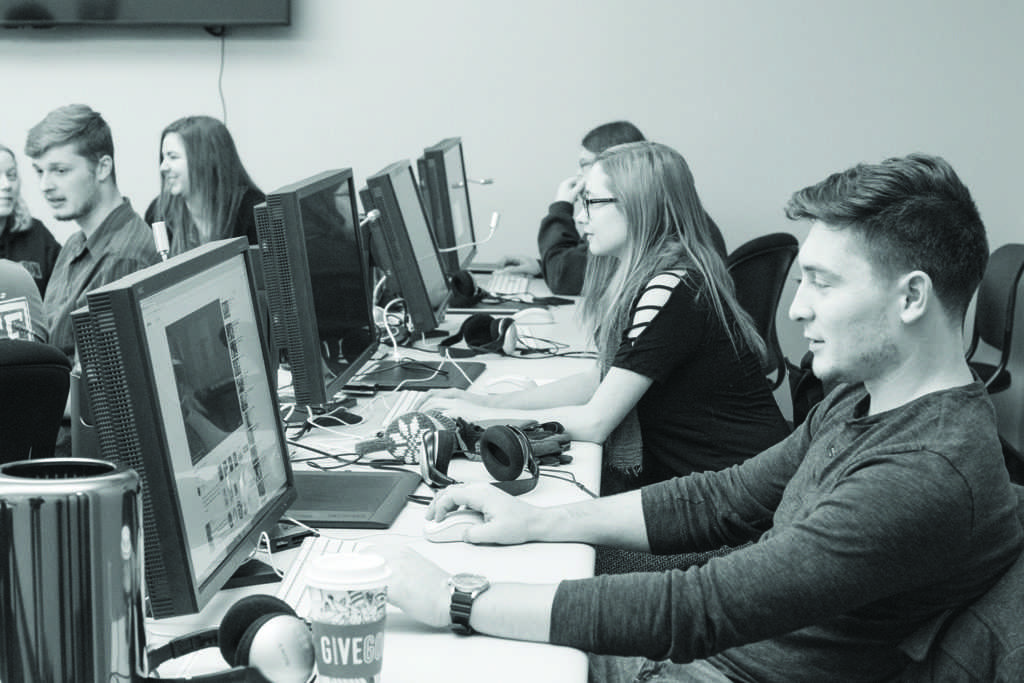 Photo by Kat Torreano: NMU students in the 4Reels club work on editing movies that they have filmed during their weekly meeting at 7:30 p.m. on Monday in room 75 in the Art and Design Building. On the right is club president Jack Cole.

From infomercials advertising imaginary products to short horror films revolving around Cheetos, any idea can be made into a challenge aimed to create innovative, thought-provoking films in a cooperative manner at Northern Michigan University’s 4Reels movie making club.

Ranging from absurd comedy to more emotional and deep themes, 4Reels gives students with little or no filmmaking background the opportunity to learn how to make short films in a professional but somewhat casual environment, Club President and senior fisheries and wildlife management major Jack Cole explained.

“If you’ve had an idea for the past couple of years burning a hole in the back of your brain— we definitely will try to help you make that happen,” Cole said.

Each week, members of the club brainstorm a prompt and get to work trying to produce a film while abiding by a challenge implemented by the group, Cole explained. While the themes and subjects are often pulled out of the air, the focus is developing technical aspects of filmmaking such as shot framing, script writing and set designing.

Inspired by Halloween, the club is currently working on short, comedic horror films with a twist. The members must incorporate making a film in their plot, making it a “film within a film.”

According to the 4Reels Facebook page, the club is actively seeking storyboarders, script writers, actors, camera operators, light and sound technicians, video editors and crew for props, costumes and makeup.

The club’s casual nature makes it easy for students to learn and gain experience in filmmaking without committing to a class, said the club’s vice president and junior digital cinema major Alexa Range.

“The club is a lot more relaxed than class, and I figured it would be a fun way to do something you like,” Range added.

Cole added that not only is it a lot of fun, but filmmaking helps develop communicative skills that he feels are valuable and applicable to professional life.

“Nowadays, everything is presented to us in a much faster pace, and video is an extremely easy, consumable form of media that can be used to display anything you want,” Cole said.

“Things that I learn and use in this club, I’m also able to transform and use in a research presentation.”

Aside from making weekly videos, there is an annual event that 4Reels holds and looks forward to year-round, Cole said. It’s their 24-hour movie contest, when movie-making teams must create a film within 24 hours of getting a prompt from a panel of judges made up of faculty from the art department.

“It’s a lot of fun to see what everyone can come up with, how much effort and how excited everyone gets about that project,” Cole said. “It’s probably the highlight of every year.”