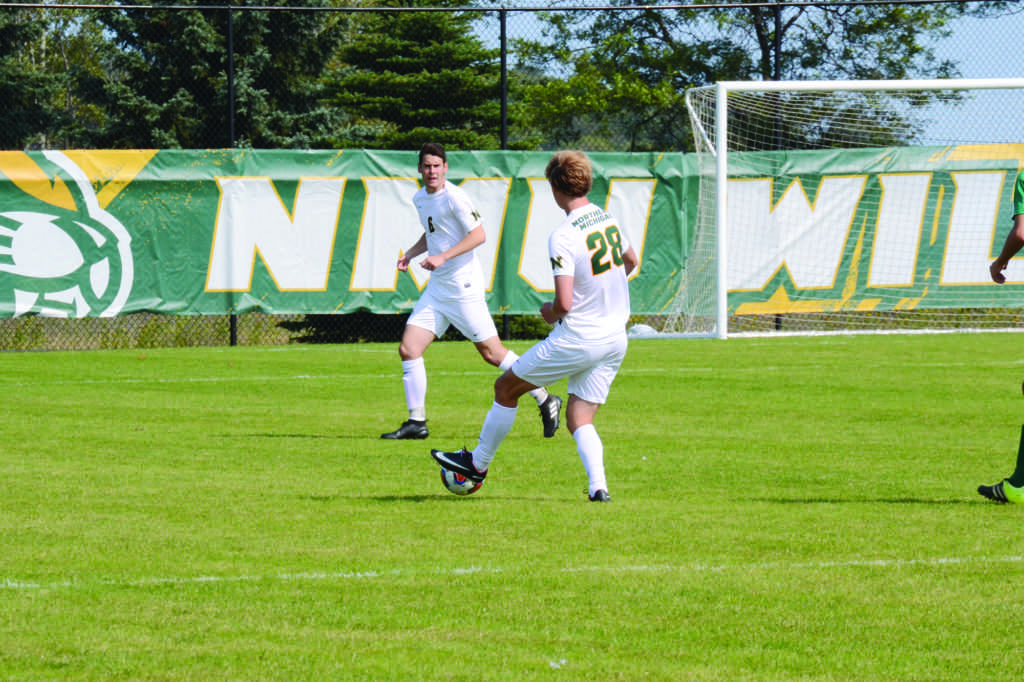 Photo by: Lindsey Eaton: In an earlier game in the season, sophomore midfielder Nick Metcalfe carries the ball out of Northern’s defensive third and looks to make a play down the field.

Riding the momentum of the huge upset in the GLIAC quarterfinals against Tiffin, the Wildcats traveled to Midland, Michigan for a semifinal tilt vs. Saginaw Valley State University on Nov. 3. Heading into the match, Northern was once again a big underdog facing a stellar Cardinal team with a record of 13-3-1, 9-2-1 in the GLIAC. The ’Cats couldn’t pull off another David vs. Goliath upset, falling 1-0.

There was no lack of offensive chances in the first half. A total of 11 shots were attempted, eight for SVSU and three for NMU. However, only one of those found its way to the keeper. Seven corner kicks were taken none finding the back of the net. The second half started off slow. 10 minutes in some pressure was put on Saginaw, directing three Wildcat shots wide of the net in a matter of minutes.

Saginaw Valley found their offensive stride in the middle of the frame taking three shots in quick succession before the fourth from Cardinal forward Michael Hamilton rattled to crossbar. Following up his shot, Hamilton beat the Wildcat defender to the rebound and tallied the first goal of the game. One would prove to be enough and the ’Cats season came to an end in the 1-0 defeat.

Saginaw Valley outshot NMU 17-8 with the shots on target 3-1 in favor of the Cardinals.

“At the end of the season we started to come together and believe in each other. We were focused on the result more than our particular selves and that’s what got us to the point of getting into the tournament,” head coach David Poggi said. Despite the loss, Northern Michigan showed they will be a real contender in GLIAC men’s soccer. With all players returning next season, the future looks bright for the young group. In the all-GLIAC teams, junior defender Kevin Hoof was named as an honorable mention.

The final regular season stats are as follows.