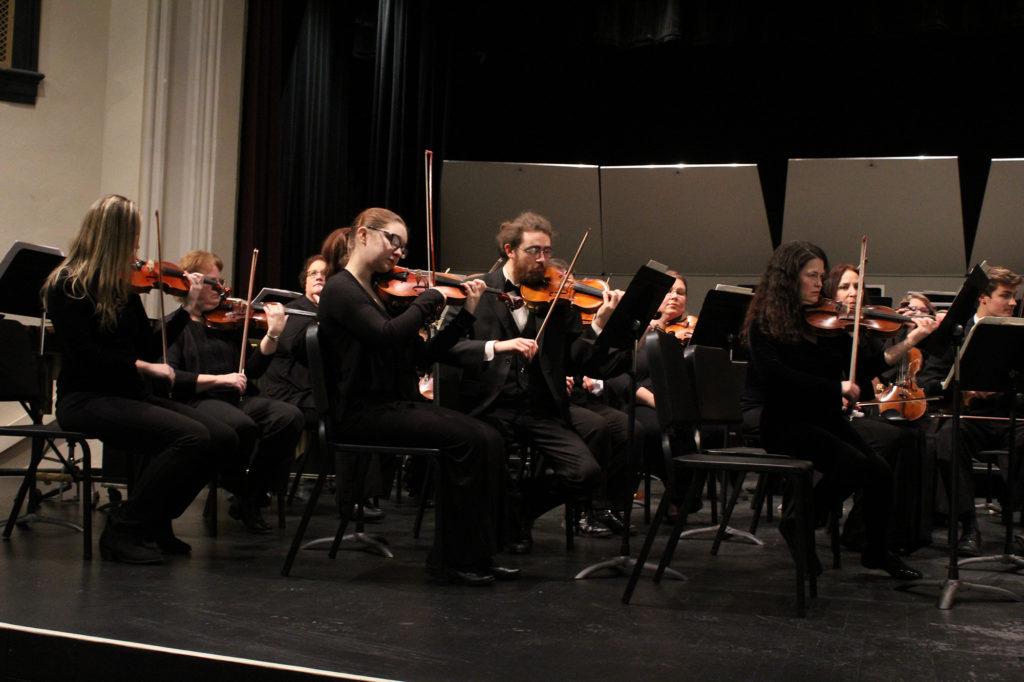 Photo by Noah Hausmann: Marquette Symphony Orchestra musicians perform on Saturday, Nov. 11 at the Kaufman Auditorium inside the historic Graveraet school on Front Street in Marquette.

The audience listens in courteous silence and with curiosity as the first notes begin.

The concerto opens with a solemn trumpet croon from somewhere offstage. Then the cellos add a slow, rich hum; then the violins, and eventually all the orchestra joins the movement and the harmony. The performers become sliding bows and dancing fingers, swaying in their seats like the tides as they themselves are moved by the melody.

The Marquette Symphony Orchestra performs concerts five times a year at the Kaufman Auditorium in Marquette, bringing a taste of live, classical music to the community, featuring the talents of both locals and guest musicians.

It all began in 1996 when the head of the NMU music department at the time, professor Donald Grant, and local music teacher Janis Peterson asked the question, “Why doesn’t Marquette have an orchestra?” Now in its 21st season, this community orchestra is continuing its legacy.

“Most big cities have orchestras, so for Marquette to have one is a big deal,” said Peterson, who is the concertmaster and lead violinist. “It’s huge for the community. Marquette is an arts-oriented place, but to have live music of this genre is special.”

A concert typically includes about 65 performers, many of them community members. Some travel from across the Upper Peninsula, and some are from downstate, Wisconsin, Minnesota and Illinois. Many performers have been with the orchestra since it began 21 years ago, Peterson said.

“That shows their level of commitment, and most aren’t musicians as their day job,” she said, adding that their talents are continually improving. “The kind of repertoire we can play and the quality has increased over the years.”

The orchestra’s concert on Saturday evening featured guest conductor Jaakko Kuuisto from Finland and the Escanaba-native, Juilliard-trained trumpet soloist Alex Jokipii for the world premiere of Kuuisto’s “Concerto for Trumpet and Orchestra.”

“What we do is bring people together,” Peterson explained. “It’s a learning experience for all of us to continue our lifelong learning. For anybody who wants to do music as a career, this is their opportunity. There’s not a lot else [in the U.P.]; we’re pretty remote.”

Typically, about a dozen of the musicians are young people, high school and college-aged. Many of the performers were also once Peterson’s students during her 37 years as director of orchestras for the Marquette Area Public Schools. They’ve returned year after year, some traveling hundreds of miles, to play with the orchestra again.

“It’s really cool,” Peterson said with a smile, welcoming musicians as they arrived before the Saturday performance. “It’s like having your family get together.”

She looked around the practice room at the musicians, with a look of appreciation and said, “They are the community.”

Tickets can be pricey, about $12 for NMU students, around $30 for general public, but it’s a nonprofit, and the sales go toward paying the performers and other necessary expenses.

The orchestra has a longstanding partnership with Northern, which provides rehearsal space and lends equipment. Most of the music faculty perform in the symphony, giving them a chance to hone and display their own abilities.

Voice professor Robert Engelhart, head of the NMU music department, who has played clarinet in the Marquette Symphony Orchestra for six years, said this “offers [faculty] the chance to play high quality orchestral repertoire… It’s very, very important for those folks to have an outlet for that.”

Furthermore, many NMU students have played in the orchestra through the years.

“Our string majors, violinists and cellists, virtually all of them have performed in the symphony… That provides a higher level for additional orchestra experience for our students, so it’s stimulating to both [NMU and the orchestra] to have this relationship.”

The musicians have the time between performances, about a month, to learn the music and practice on their own. Only the week before each show is when they actually rehearse together. This can be challenging, but all the musicians are “high-level” trained, Engelhart said.

“When you’re practicing music individually, it’s one thing entirely. But then when you’re in concert with the others, it’s such a wonderful feeling to hear the other parts and to feel that you’re kind of nested within these other parts. To feel like you’re doing your job, pulling your own weight, is a lovely feeling,” Engelhart regaled.

“I find it extremely stimulating. The sense of alertness is high… you’re constantly aware, listening. It’s kind of organic. You feel like you’re part of a whole; you’re one little cell within a living organism that’s trying to come to life,” he said with a chuckle.

While classical performances might challenge the attention spans of today’s audiences, seeing an orchestra live is the only way to recreate the experience of hearing, for example, a Beethoven symphony as the composer intended, he said.

“We find part of our soul by looking at these works of beauty and trying to understand them and appreciate them in a deeper sort of way,” he explained. “They touch us, so it’s worth it.

“It’s a heck of a lot of work. When you’re in the middle of trying to put [an orchestra concert] together either as a performer or conductor, there are these moments when you say, ‘Gosh, is this even worth it?’ But in the end, you’re bringing into existence something that deepens the human experience, and being in the concert hall is a really important aspect of that.”

The next symphony orchestra performance is the annual “Holiday Concert” on Dec. 9.