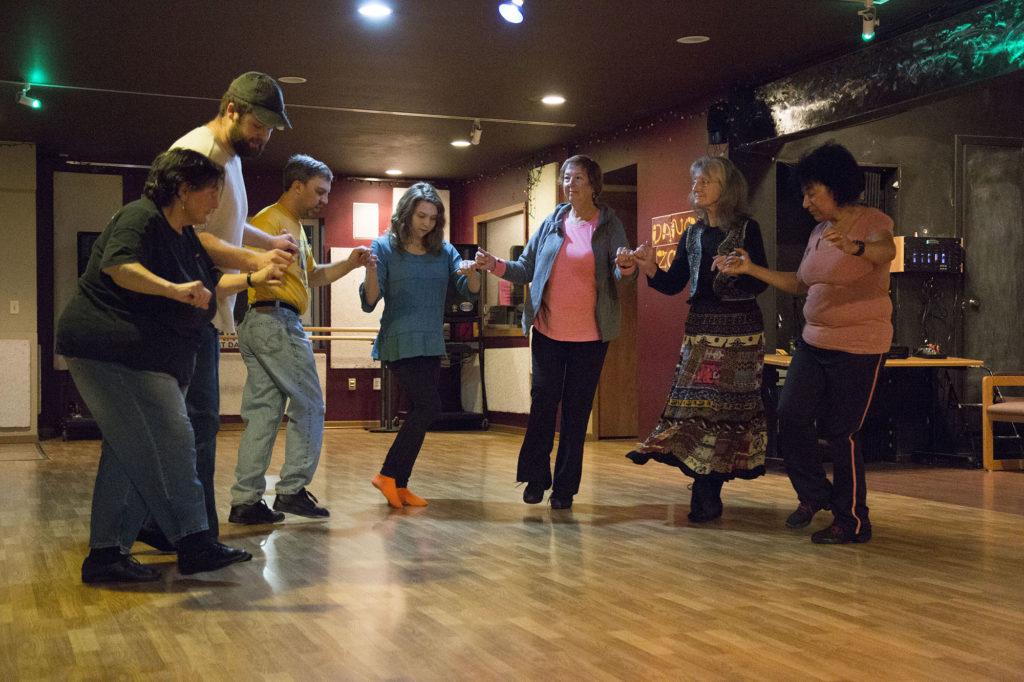 Photo by Neil Flavin: The International Dance Club circles up for a round dance on Tuesday evening at the Dance Zone in Marquette.

Dance styles from all over the world shine bright when you step into Marquette’s Dance Zone studio. The studio opens its doors to styles of all kinds, and is a local hub for dance education. NMU’s International Dance Club uses its space and joins with community members both young and old to celebrate and learn all different kinds of moves.

The group has been hitting the floor at the Dance Zone located on Lincoln Avenue since 1990 and currently has about 13 members. An international folk dance session is held at 7 p.m. on Tuesdays and a hula group meets at 5:30 p.m. on Fridays, in addition to other weekly and monthly events, like square dancing at 6 p.m. on Mondays and contra at 6:30 p.m. on the first Sunday of each month.

Marge Sklar, owner of Dance Zone, is an NMU college of business alumna and the adviser for the International Dance Club.

“We learn dances,” Sklar explained. “Some of us go to workshops about eight times a year or so, and we learn new dances. We try to be true to what we learn. I just like learning about other people. We travel every week, we don’t have to go anywhere, but we travel through people’s music and dance.”

Learning through movement instead of a whiteboard, participants get to know the history behind the dances, Sklar said.

Dancing in the club brings together members of both the NMU and local community, building friendships through a common interest.

“I know it’s good for people of all ages to work together. We’ve often had students who’ve stayed with us while they were in Marquette. It’s just good for people of different ages to learn from one another. It gives people a sense of belonging. It doesn’t matter how old you are,” Sklar said.

Member of the Marquette community for 20 years, C. Wilkinson enjoys the cultural aspects of international dance as well.

“Everywhere where there’s dance, there’s a community. Have fun with it, learn it and pass it on to the next generation,” Wilkinson added. “These kind of art things have to be passed on.”

Ashley Finfrock is an NMU psychology grad student and has been affiliated with the group for one semester, attending hula lessons and other dances.

“I’ve always liked dance,” Finfrock said. “I was never really one of those people who had classes or anything, but I’ve always enjoyed it. A group of us go every week. I like it a lot. We’ve learned several songs at this point. It’s really awesome because when you think of hula, you just think of waving your arms and wagging your hips, but there’s actually a lot of arm movements,” Finfrock said.

Finfrock finds enjoyment in the old-time feeling of these styles of dance.

“It’s like being in a Jane Austen movie,” Finfrock explained. “It takes you back to a time when dancing was more formal but fun. There’s something awesome about it.”