21 Savage and Offset team up: Hip-hop artists collaborate on mixtape with mixed results 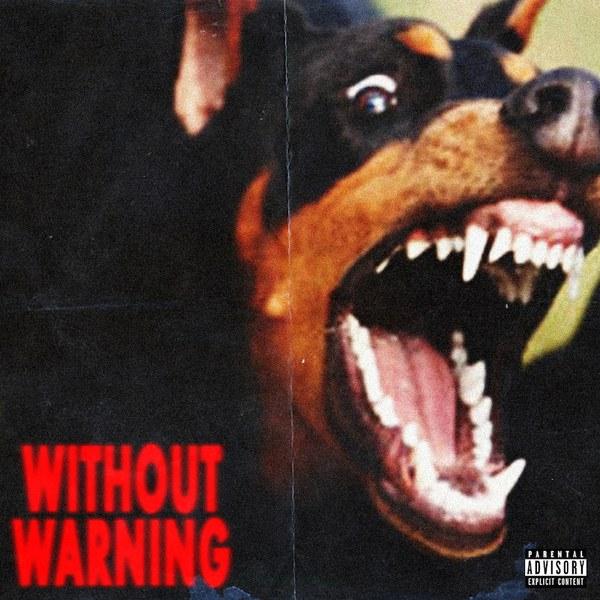 Atlanta rappers 21 Savage and Offset are both currently at the top of the rap game. 21 Savage is coming off the success of his debut album “Issa” which featured hit song “Bank Account.” Meanwhile, Offset has become a heavily sought after feature in hip-hop and is seeing tremendous success as a member of the rap trio Migos. Furthermore, the hottest producer in hip-hop of the last three years, Metro-Boomin, seems to be just putting out hit after hit and has given Atlanta their trademark sound that has helped elevate the city to what has become the epicenter of modern-day hip-hop. 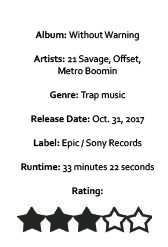 So being that these rappers are both reaching new peaks in their careers, a collaborative mixtape produced by the hottest beat maker in hip-hop would be nothing less than good, right? Well, mostly. The studio mixtape “Without Warning” is the result.

While the mixtape is not bad by any means, it definitely does not exceed the expectations of the names attached to it. The production is great for the most part. Metro-Boomin comes through with a set of 10 nocturnal, ethereal, and occasionally sinister beats that are reminiscent of 21 Savage’s and Metro-Boomin’s previous collaborative mixtape “Savage Mode.” However, 21 Savage and Offset don’t always live up to the standard of their producer. Some of the choruses on this project end up being lines that are annoyingly repeated over and over again to fill space on the beats, specifically on “Run Up the Racks” and “Nightmare.”

The lyrical content on the tape is repetitive. Even though I’m not expecting to be blown away by the lyrical acrobatics or substance of these MC’s, hearing about how much money 21 Savage and Offset have gets old after the first few tracks. This causes the mixtape to feel like it’s dragging in certain spots, specifically toward the middle.

Where both rappers do shine, in terms of their lyrics is where they are their most brutally honest. 21 Savage reminds the listener many times throughout the project that he is not the kind of guy you want to mess with. You can feel the authenticity in his delivery which is part of the reason he can be so interesting to listen to. He does this best on “Rap Saved Me.”

In my opinion, the biggest reason these rappers can be so entertaining to listen to is their flows. Offset’s triple-time style sounds great when juxtaposed with Metro’s production style, and 21 Savage’s straightforward, cold-blooded flow adds a nice brush of darkness to the songs on the tape. It was impressive how well these styles mesh together, being that 21 Savage raps in a distinct slow-paced style and Offset shoots out one line after another as if he’s a rapping machine gun.

The features on “Without Warning” are decent. Travis Scott comes through with a decent verse on the tail end of “Ghostface Killers” and Quavo adds some melodic vocals and a brief verse to close out “Rap Saved Me.” Neither elevate the tracks all that much, but definitely don’t take away anything either.

Overall, the tape is decent. It could’ve used some variance in terms of subject matter and punchier hooks. However, the production helped distract from some of the project’s weaker moments, and at a runtime of only 33 minutes the project doesn’t overstay its welcome.