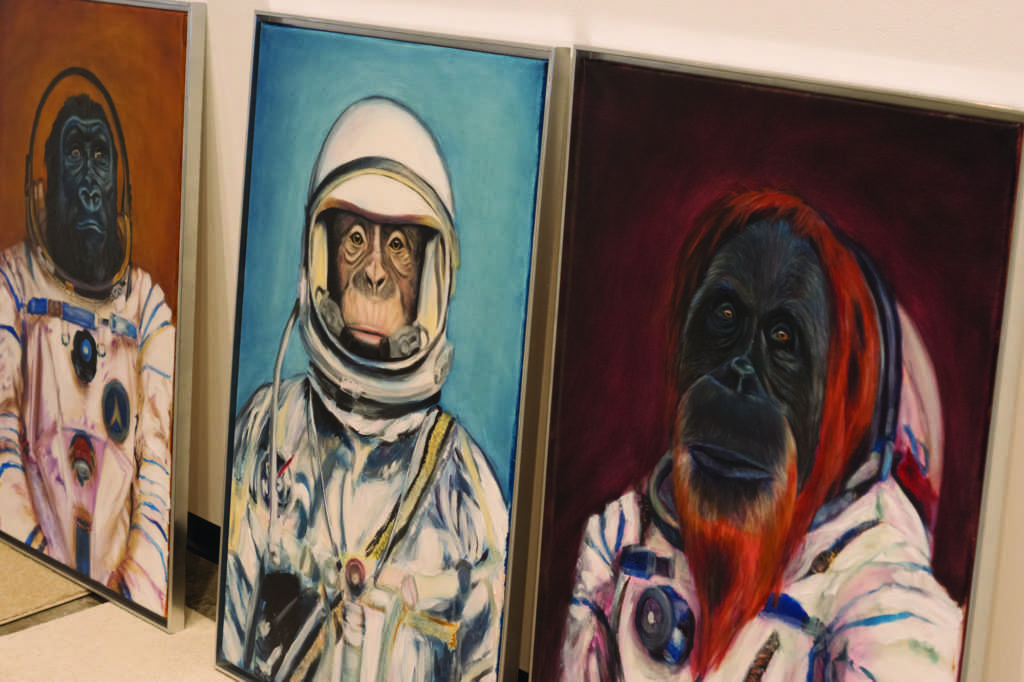 The annual senior exhibition is held at the DeVos Art Museum

For art and design seniors close to graduating, this week has been a stressful one as they scrambled to put the finishing touches on their final projects. But now they can breathe easy seeing their artwork on public display.

About 30 graduating seniors from every concentration of art and design will have their work on display at the DeVos Art Museum this month. The NMU Fall 2017 Senior Exhibition in the Art and Design Building runs Dec. 1 to Dec. 15, is free for the public and features work from every concentration in the school of art and design, from videos to ceramic sculptures to even a combination backpack hammock. The exhibit is the final project of AD 403, a class that is mandatory for art and design majors to graduate.

“It is the culmination of their foundations program, their concentration, and… it is a final body of work that they produce while they’re here as students,” DeVos Collections and Outreach Curator Emily Lanctot said.

The class is about all aspects of the students’ professional development. With mentorship from their advisers, students create projects for the exhibit, design posters and write artist statements and resumes. Each student has about 5 feet of wall space in which to install their project, and they install it themselves.

“For some people, they probably haven’t installed work before, so this gives [students] the opportunity. It seems really simple just putting stuff on the wall but there are a lot of factors that go into that, like how is the piece going to attach to the wall? It takes some problem-solving… some creative solutions,” Lanctot said.

There will be a closing reception from 7 to 9 p.m. Dec. 15 for students to meet with the public and discuss their work.

“Having it in the museum is a great way for them to network with the public, to meet potential clients and the community, people who have galleries and are interested in having art in their spaces,” Lanctot said. “For some people, it is their first public showing at a museum, and that’s a big deal. It’s the first time you’re engaging the public that aren’t your peers in critique.”

For his project, Tanner Schut, a senior with a graphic design concentration, redesigned 14 Midwestern city flags. Schut was inspired by a “TED Talk” given by Roman Mars, creator of the design and architecture radio show “99% Invisible,” on the topic of bad city flags. His work on display is a poster showing both the flags’ current designs and his redesigns, along with miniatures of those redesigns. One of the flags he made full-size and gifted to Mars.

“There’s five principles of flag design,” Schut said, “Keep it simple, use limited colors, no letterings or seals, use meaningful symbolism and be unique. I was inspired by [Mars] and wanted to look at the most populated cities in the Midwest and see how bad or good their designs were and then reconstruct them.”

He also made five different designs for the Marquette flag, which can be voted on for which flag he will present to the city as his recommended redesign.

“It’s a little nerve-wracking… but it’s pretty relieving being done with the last thing,” Schut said. “It’s exciting to leave something that’s meaningful and that everyone can understand. I’m glad that I put my all into it as my last hoorah at Northern. Hopefully, there’ll be a Marquette or U.P. flag flying after I leave.”

Carter McFall, a senior concentrating in art education, drawing and painting, made three oil paintings in a series entitled “Passengers” depicting apes as astronauts. McFall used photographs of human astronauts, like John Glenn, as reference and then imposed the chimpanzee, gorilla and orangutan faces.

“I wanted them to look humanistic,” McFall explained. “To me, it means that we’re all travelers on Earth and that we’re all just complicated monkeys. The idea of space monkeys is a reflection on us. I wanted them to look like humans so that when people feel the presence of the paintings or say ‘Wow, it’s realistic and sort of humanistic,’ they may feel some empathy or connection with these characters.”

Molly Wetter, a senior concentrating in human-centered design, considered environmental impact in her project. She created artsy, jigsaw puzzle-shaped floor tiling made from recycled conveyor belts. The belt rubber would otherwise be waste material in a landfill.

“I want consumers to be more conscious of the decisions they make when they’re purchasing sustainable items, and I also want to encourage designers to make more sustainable products because that will have to be our future,” Wetter explained.

“It feels good to work at something for so long and to see it in its entirety,” she
said. “It feels really good on the inside, that you’ve accomplished something strong and
powerful. The commitment paid off.”

Casie Brewer, a senior in human-centered design, created renderings and 3D models of an urban park, a plan that cities could buy and construct as a community space. The plan includes a pavilion, jungle gym, fountain and maze. Called “Orbit Park,” all of the structures include circles as a recurring element.

“I went with circles,” Brewer explained. “I thought that’d be more welcoming and that it would represent the wholeness and unity that people would be able to feel coming together in the same space. So the circle is a worldwide symbol of balance and fullness. [It’s for] kids, families, elderly, everyone.”