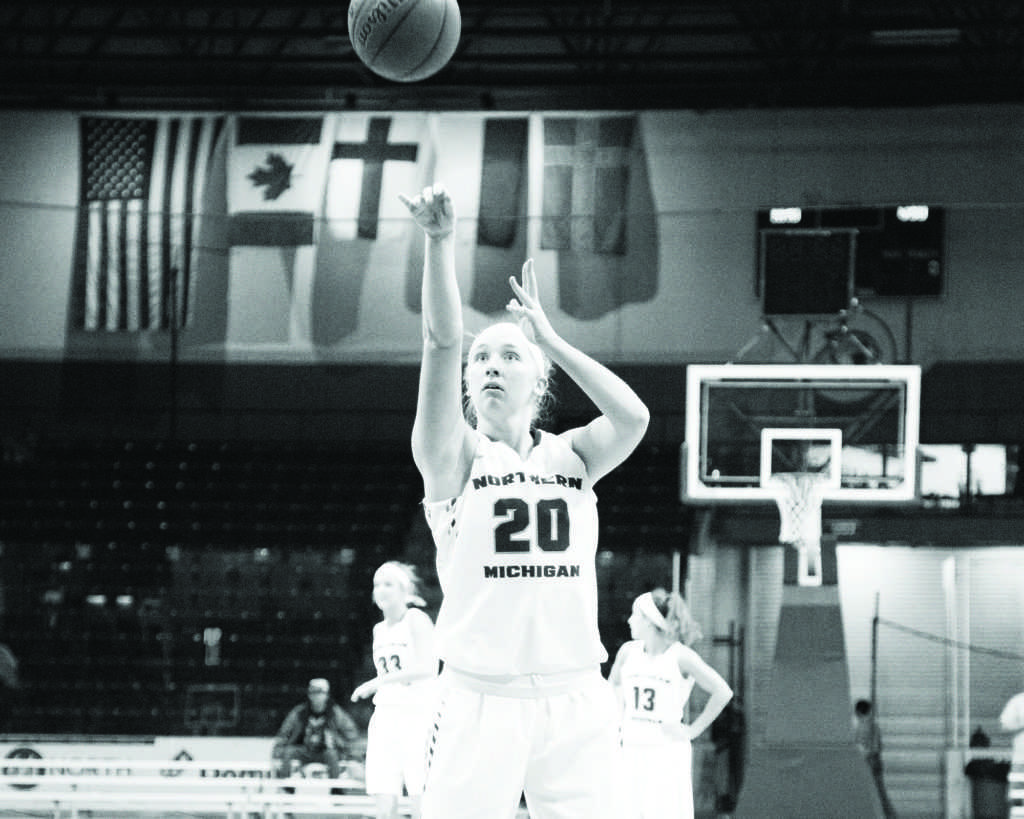 Northern Michigan’s Women’s Basketball team concluded their season-opening seven road game trek with a 63-55 comeback win over the Bellarmine University Knights, but lost 59-49 to the University of Southern Indiana Screaming Eagles at the Bellarmine Tournament over Thanksgiving break.

Head coach Troy Mattson said that he was pleased on how the team survived their busy start to the season.

“I’m very proud of how the girls handled this whole month of November on the road and the amount of competition that we faced,” Mattson said. “Through the weekend, we fought tooth-and-nail against two tough teams and I’m excited about that.”

Sophomore Erin Honkala said the team had a good showing for the tournament.

“I thought we played really well. Though we suffered one loss, but I thought the weekend was successful,” Honkala said.

On the 25th, a Wildcat slow start resulted in the Knights surging out front early. Falling behind 33-27 at halftime, NMU came out aggressive on offense. Junior guard Darby Youngstrom’s five-point run lifted the Wildcats to the lead halfway through the third quarter. The teams swapped the lead back and forth with the hosts taking a 45-42 lead into the final frame.

The Wildcats’ huge fourth quarter saw a seven straight point run to take the lead for good. Bellarmine would cut the lead down to one, but NMU outscored the Knights 21-10 to decide the game.

On the 26th, Southern Indiana and NMU started the game battling for momentum as both teams swapped leads through the first two stanzas. Youngstrom and Honkala combined for 16 points between the two players as the Wildcats took a 24-22 halftime lead over the 17th-ranked Screaming Eagles.

The Eagles came out in the second half with strong shooting and rebounding to take a nine point lead into the fourth quarter. NMU attempted to make the game closer trailing by eight and with thoughts of an upset, but Southern Indiana put the game out of reach at 59-49.

“We probably played our best first half of basketball on defense against them. We made a couple of key mistakes in the third quarter, but Southern Indiana is a powerhouse team and I give them credit for that,” Mattson said.

Honkala recorded a double-double (12 points, 12 rebounds) with Youngstrom adding 16 points in the game.

“Honestly, I didn’t know I got it, but I’m excited about it,” Honkala said on her double-double.

“Erin’s been doing amazing, and it seems like every rebound was falling right to her arms,” Schramek said.

NMU begins their home schedule with conference opponents (Northwood and Saginaw Valley) this weekend with the team yearning to finally play at home at the Berry Events
Center.

Schramek said she’s eager to play stout competition on the home court, along with a family reunion on Saturday.

“We know that Saginaw Valley has lost two big players at the start and my sister plays for them too, so it’ll be my first time playing her,” Schramek said. “We don’t know much about Northwood, but we’re all excited to start conference play.”

Mattson noted they’re in a “three phase” season, which he said they’re approaching their second phase of GLIAC play.

“To me, all records are 0-0,” Mattson said. “We have matured well as a team and we’re looking forward to the opportunity to play in our conference.”

The Wildcats tip off their home schedule Thursday night against Northwood University Timberwolves and on Saturday against the Saginaw Valley State Cardinals.