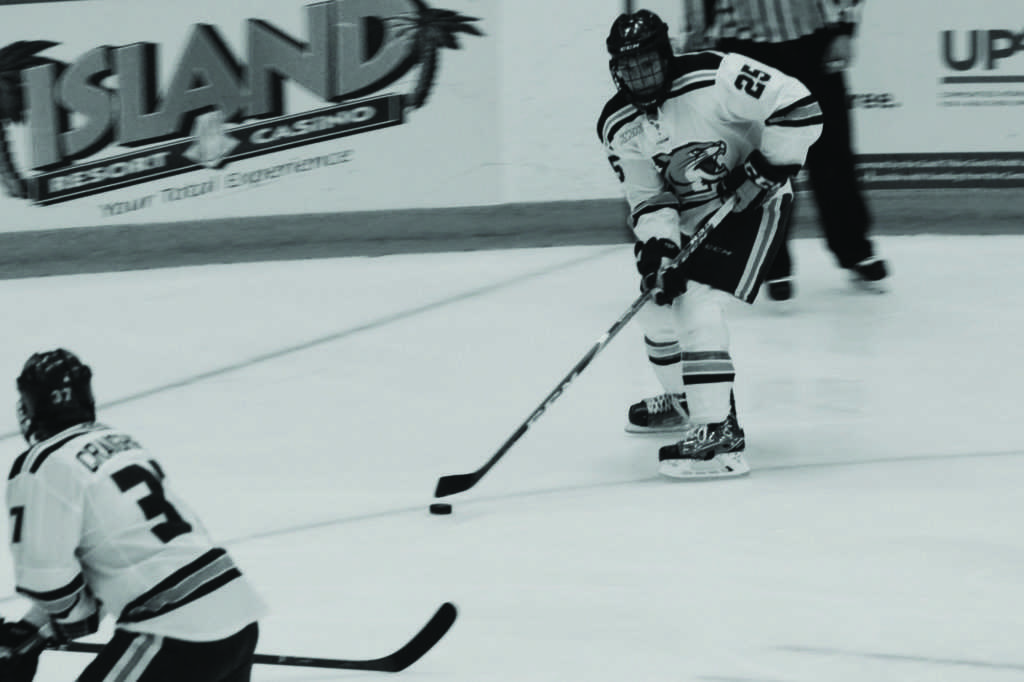 Photo by Lindsey Eaton: Freshman forward Caleb Schroer skates down the rink with the puck in a game earlier in the season. Sophomore forward Darien Craighead cruises down the ice as a potential pass option.

The Northern Michigan University Hockey team dropped a pair of non-conference road games this past weekend against the University of Nebraska-Omaha Mavericks.

The Wildcats, who entered the weekend at 7-5 after splitting their away series against the University of Alaska-Fairbanks, looked to prevail against the 4-5-1 Mavericks in Omaha’s Baxter Arena.  The Mavericks, who play in the National Collegiate Hockey Conference (NCHC), came into the series with the 4th-best powerplay percentage in the nation at 28.9 percent and were keen to get a win and snap their three game losing streak.

Friday’s game saw Omaha take an early lead, scoring their first goal only 2:33 into the first period on their second shot on net.  The Mavericks had a power play only two minutes later, but despite their best effort, they failed to find the net with the man advantage.  At 8:53 of the first period, sophomore defender Philip Beaulieu evened the score at one during the late stages of a 4 on 4 situation.  Beaulieu’s goal was the Wildcats’ first shot on net of the contest.

The Wildcats took the lead just over a minute into the second period when freshman forward Joseph Nardi found the net for his third goal of the season.  The lead did not last, however, as Omaha’s Tyler Vesel scored at the 7:30 mark, tying the game 2-2.

“We didn’t start the game on time,” Wildcat head coach Grant Potulny said of his team’s performance on Friday.  “They scored early on us, and then we had to kind of claw back.  I think the third period of the game was probably as good of a period as we’ve had.  We probably deserved to win the game, but that’s hockey.”

Saturday’s game was markedly more one-sided, with Omaha taking a 2-0 lead less than two and a half minutes into the first period on goals from David Pope and Luke Nogard.  That score remained until the 2:03 mark of the second period, when the Mavericks’ Teemu Pulkkinen beat sophomore goalie Mathias Israelsson to make the score 3-0.

“On Saturday, I thought it was one of the poorer games we’ve played all year,” Potulny said. “There’s a lot that goes into that.  I mean, the end of a 10-day road trip, and you had an emotional game on Friday that just didn’t go your way, and sometimes that’s going to happen. The challenge now is just getting back home where we’ve been good and getting on track again.”

The Wildcats fall to 7-7 overall, and head back into WCHA play with a home series against the University of Alabama-Huntsville Chargers this weekend.

“Very quietly, they’re one point behind us, with the same amount of games,” Potulny said of Alabama-Huntsville.  “They’re competitive as all get-out, and they’re fast.  Some teams might struggle on our ice surface, but I think they’re kind of tailor-made to come in here and play right with us, so we’ve got to be prepared.”

Puck drop for both Friday’s and Saturday’s game will be at 7:00 p.m. at the Berry Events Center.