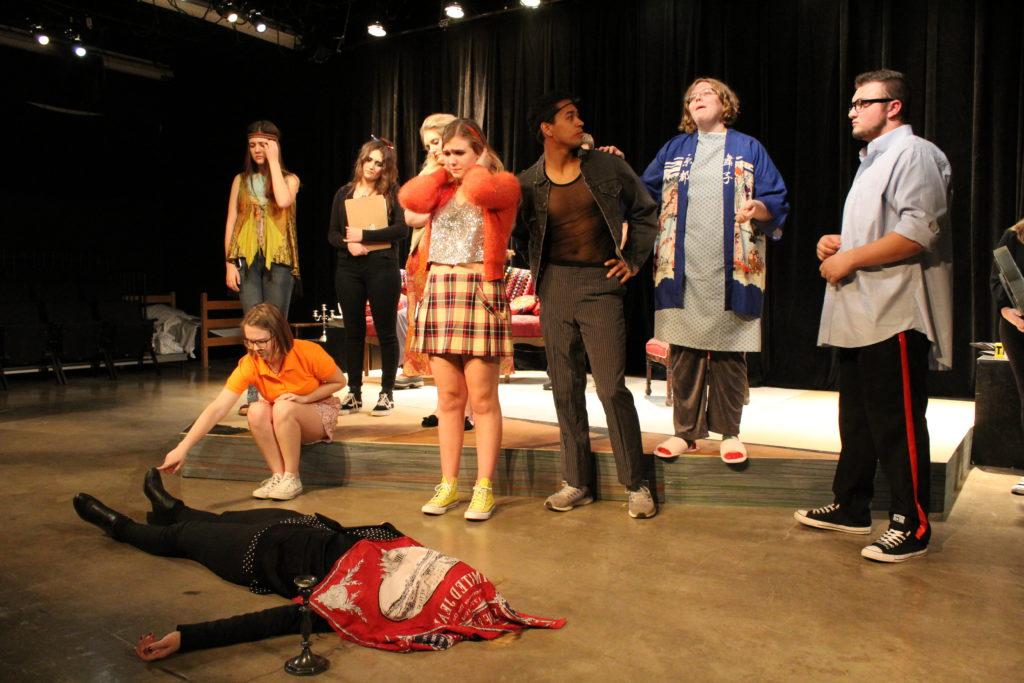 Photo by Noah Hausmann: The casts of "The Bold, the Young, and the Murdered" attempt to solve a mystery killing on their soap opera set.

The soap opera murder mystery comedy “The Bold, the Young, and the Murdered,” an entirely NMU student-led show, will be playing up the laughs this weekend.

The play, a production of Alpha Psi Omega (APO), a national theater student honor society, will perform at 7:30 p.m. Dec. 7 through 9 in the Panowski Black Box Theatre in the McClintock Building, with all profits going toward future APO shows.

This comedy follows the bickering cast of the fictional, long-running soap opera, “The Bold and the Young,” who are told by their producer that their series is on its last legs. They have one night to stop fighting long enough to finish an episode or the show gets canceled—perfect timing for one of the crew to be murdered. The play was written by Don Zolidis, the same playwright who wrote the “Brothers Grimm Spectaculathon” comedy that APO performed last year, so these students are excited to be performing his style of humor again.

“It’s going to be a hilarious night of over-the-top and dramatic comedy, filled with the mystery of a whodunit. It’s a well-written show,” said director, senior theater and entertainment arts and sociology double major Amber Urban.

That this comedic melodrama takes place on a soap opera set gives this show a unique kind of ridiculousness, Urban explained.

“It adds a lot of the comedy, so we can go over-the-top with just pure drama,” she said. “It lets us have a lot of fun, and when the actors are having fun, the audience is going to have fun.”

For Urban, this is her first time directing, and she expressed the enjoyment she feels that this play has transformed from a vision into a reality. She said she couldn’t have done it without her cast and crew.

For APO shows like this, students handle every element of the production, from finances to promotions to prop-making. Any NMU student is welcome to participate, which gives students who aren’t normally involved in theater an opportunity, Urban said.

“It’s a blast,” Morgan said. “A lot of the characters are really over-the-top, stereotypical, cheesy characters, and so being able to take a character to the extreme is what makes it fun.”

Morgan also enjoys that each aspect of APO productions is student-led.

“It’s cool because it really lets us come together as a group,” he added. “It puts a lot of the fun back into theater, and we’re all here just because it’s something we love doing.”