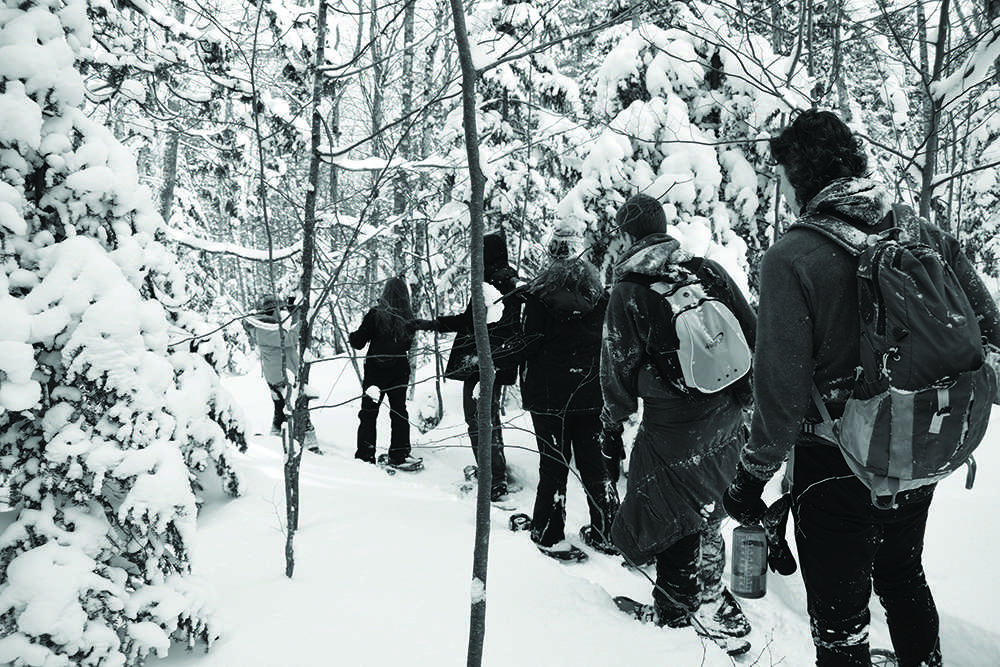 A group of Northern students enjoy last Tuesday’s snow day by hiking around the trails at Tourist Park. Photo by: Lindsey Eaton

Snow has been picking up in the Marquette area and has potential to continue into early spring, leaving many wondering how to stay safe and stay warm in extreme conditions.

“A big thing that is overlooked is vehicle maintenance. Making sure your tires have a deep enough tread, making sure your brakes work, that kind of stuff is really important for driving safely,” Kovar said.

He also said that clearing off your car is extremely important. He mentioned often seeing cars driving around with just a small area of the windshield cleared off. Kovar recommends taking the time to clear off your entire car for your safety and the safety of other drivers.

An aspect of life at NMU is getting off campus and enjoying the wilderness and various trails, Kovar said.
“Don’t let the bad weather keep you inside, just be prepared,” Kovar said.

One of the biggest things that a lot of people don’t do is let a couple of people know where they’re going, he said. He also mentioned to specify the time range when you should be back, and to have people check in on you if you aren’t back by then.

Kovar’s last tip is an obvious one, but also very easy to mess up: dress appropriately. Look at what the weather is going to be and make sure you wear clothes that will keep you warm.

“Keep some spare clothes in your car too, just in case you get in a situation where you’re wet and need to change,” he said.

The weather started to get especially cold around Christmas, said Tim Akom, electronic systems analyst for the Marquette branch of the National Weather Service.

Akom said the temperatures were bordering on breaking the record lows set in winter of 2014.

The snow has also been consistent so far this winter. Akom said that most of the snow the area has gotten so far has been lake effect.

“As long as [Lake Superior] remains open, there is always the chance that we’ll be getting lake effect precipitation.”
Akom also added that the small dustings of wet snow we receive occasionally are from low-pressure systems that move quickly through the area.

Akom warned that due to this warm up, the precipitation we do get has the potential to be mixed, meaning freezing rain, which can cause slippery conditions.

As for the rest of the winter, Akom explained the weather shouldn’t range too far out of the ordinary. He tentatively believes that both temperature and precipitation will be normal to slightly below average for the remainder of the season.

“I don’t like to get too specific when going that far ahead. All it takes is one big lake effect event to change the outlook,” he said.