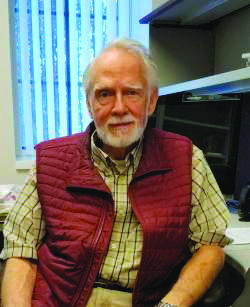 A former professor of psychology retired and signed a separation agreement with the university after being suspended with pay for “violation of the university’s Sexual Misconduct Policy.”

In a strongly worded Oct. 6 letter obtained by The North Wind via a Freedom of Information Act Request, Associate Provost for Academic Affairs Dale Kapla outlined what he called “egregious behavior” by former professor Harry Whitaker.
The behavior included asking a “female student for sex while [Whitaker was] intoxicated” and several days later in his office telling her “‘the offer still stands.’’’ Kapla also said in the letter addressed to Whitaker, which notified him of his suspension, that Whitaker “repeatedly commented on the appearance” of a second female student who worked in his department’s office and “repeatedly invited the same female student to coffee, lunch and/or dinner alone” with him off campus to “discuss a research project.”

Kapla said Whitaker did not extend the same offer to male students.

Most of Kapla’s letter pertained to the second student, who worked as a secretary in Whitaker’s department. Kapla said during one of Whitaker’s invitations to dinner alone with him off campus, he “asked the same female student whether she owned a car, and that she need not worry as they would find a place to hide it.” After “repeated invitations by [Whitaker], the same female student answered, ‘I don’t know.’” Kapla said Whitaker “then stopped both lunch/ dinner invitations and the offer to discuss a research project.”

“I met with the former female student employee in person and it is difficult to put into words the impact your conduct has had on her emotional well-being and education,” Kapla said in his letter to Whitaker. “Your conduct has severely eroded the respect and reverence she had for you as a professional and role model. Your conduct has raised questions about the real reasons behind your work with students. Your conduct caused her to avoid you, which left her wondering how such avoidance would affect her employment and education.”

Kapla said Whitaker told the female student to keep the lunch and dinner invitation to discuss her research project “confidential as to avoid gossip among other students” and also “not to tell” the department head and secretary. Kapla said Whitaker first denied this but later admitted to asking her to do this.

“Your behavior is nothing short of egregious, and is not, and will not be tolerated by the university,” Kapla wrote. “I am therefore recommending your immediate dismissal from Northern Michigan University.”

On the same day Kapla’s letter was sent to Whitaker, Director of Public Safety and Police Services Michael Bath sent Whitaker a “no access” letter informing him that, as a result of his suspension with pay from NMU, Whitaker would be prohibited from entering onto any property owned by the university effective immediately.

“If you are observed on any University owned property without prior approval, you will be treated as a trespasser and arrested on criminal charges,” Bath’s letter to Whitaker stated.

According to Bath’s letter, one exception to the no access order was that Whitaker would be allowed to attend meeting(s) with the AAUP staff in the Cohodas Administrative building with prior approval and verification from the AAUP.

Whitaker “vigorously denied any wrongdoing” in a Dec. 15 letter to Kapla and requested that Kapla’s Oct. 6 letter be removed from his personnel file. Whitaker had also requested on Oct. 20 an appeal and review of his case by the Faculty Review Committee (FRC). No documents pertaining this review were obtained via the FOIA request.

Whitaker sent a second letter to Kapla on Jan. 11, which he requested be added to his personnel file, that offered his version of the events outlined in Kapla’s Oct. 6 letter.

While Whitaker did not deny asking the woman for sex during a “funeral celebration,” he said she wasn’t a student at the time.

“I indeed had been drinking excessively that evening and would never have remembered the alleged incident except for the fact that the woman showed up in my office a few weeks later, to ask me if I remembered what happened at the party,” Whitaker said in his letter to Kapla. “I did not, whereupon she told me that I had asked her up to my hotel room. I interpreted this as light banter and replied that the offer still stands. She became annoyed, telling me that she preferred women not men; I promptly apologized.”

Whitaker also said this incident happened nearly a decade ago and that, though she did return to his department as a graduate student, he was never her professor nor had he ever been in any “supervisory role of her.”

Referencing the second female student from Kapla’s letter, Whitaker said his comments about the student’s appearance started in the winter semester of 2016 when the student came to work upset about breaking up with a “long-term boyfriend.”

“I did attempt over the next seven or eight months to help restore her self-esteem,” Whitaker said.

Whitaker said the invitations were extended during the winter semester of 2017 and that he met the male student “first for dinner at the dining facility in the Student Center,” then later in the semester at Whitaker’s home.

Kapla’s allegations that Whitaker had tried to keep his invitations to meals off campus with the female a secret was never addressed in Whitaker’s Dec. 11 letter. However, Whitaker did say he stopped the invitations after it became clear she was “not interested in having lunch or dinner” with him.

“After that, my only contact with her was an email sent to her on March 17, 2017, inquiring whether or not she was going to attend the Wildcat Weekend event, assuming I could bring up the research project again at that time. She did not reply nor did I see her at Wildcat Weekend,” Whitaker said.

On March 27, Whitaker said he received an email from Director of Equal Opportunity and Title IX Coordinator Janet Koski, asking him to see her about a complaint.

“Of course after that it was inappropriate for me to bring up the research project with this woman,” Whitaker said in his letter to Kapla.

Though Whitaker appealed his case to the FRC, he later opted to retire and sign a separation agreement on Dec. 4, agreeing to be retired and separated from NMU by Dec. 31.

By signing the separation agreement, Whitaker agreed not to “ask for, involve or permit any NMU student to participate in any way in his future research, and not to initiate or solicit contact with any student while on campus or through the use of any NMU media or device, including email.”

The separation agreement also states that the “no access” letter sent by Bath would remain in effect for a minimum of 24 months after which, at Whitaker’s request, NMU’s Public Safety Department could reassess the order. If the order is reassessed, a determination will be made based on Whitaker’s compliance with the separation agreement and the potential impact to university community members.

Through the separation agreement, the no access order contained the exception of Whitaker using the NMU Health Center in its current location with Bath’s approval, and only while such benefits are available to retirees.

The separation agreement also included a non-disparagement agreement that states, “The Employee agrees and covenants that the Employee shall not at any time make, publish, or communicate to any person or entity or in any public forum any defamatory or disparaging remarks, comments, or statements concerning NMU, or any of its past or present trustees officers, employees, students or related third-parties.”

The NMU Sexual Misconduct Policy found in the Public Safety and Police Services tab of the NMU website states that Sexual Misconduct is a term includes sexual assault, sexual harassment, stalking, dating violence, voyeurism, sex discrimination, domestic violence, and any other conduct of a sexual nature that is nonconsensual.

Dale Kapla declined to comment on anything regarding Whitaker’s case and referred any request for comment on NMU’s current Sexual Misconduct Policy to President Fritz Erickson.

Erickson said employees of the university are prohibited from talking about personnel matters, but student complaints about harassment will always be investigated, especially when there is a pattern of complaints.

“Our primary concern will always lie with our students,” Erickson said.