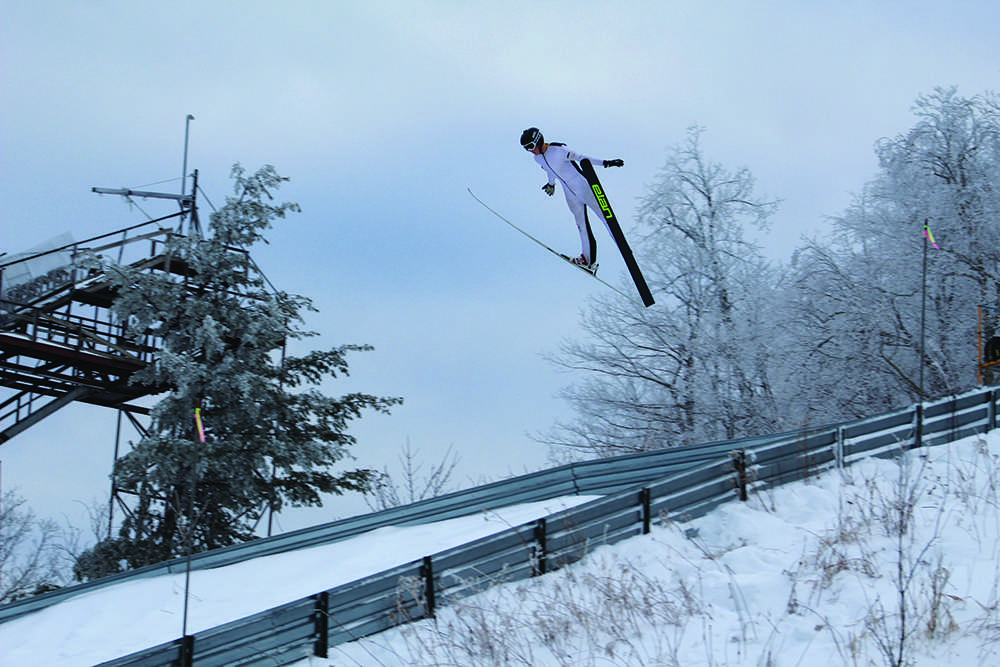 The ski jumpers shoulder their 8-foot skis and climb up the narrow stairs to the top of the 300-foot Suicide Hill. From the top, the crowd of spectators appear to be the size of bugs. There’s an ambulance at the bottom, just in case. One at a time, a skier will step off the stairs and grip the starting bar at the top of the towering ramp. Then the skier’s off, zipping down the hill at 55 mph with a grind of skis on icy track. Leaving the jump and the earth behind, the skier soars, whistling through the air, skis like wings bent back toward the skier’s face, their whole body leaned forward. Then the skier lands on the still-sloping hill, having flown 290 feet, and skis to the bottom, then hockey stops with a spray of snow and audience applause.

Some skiers came from Marquette County, but others traveled from Utah, Colorado, New York, and even Slovenia and Finland. About 25 ski jumpers, most of them boys and girls ages 12 to 17, competed in the tournament, ISC Ski Jumping head coach Gary Rasmussen said.

“I love the flying aspect of the competition. It’s a blast,” said Rasmussen, who’d jumped Suicide Hill himself
from 1972 to 2009. “These kids are having the ride of their life.”

Many of these skiers started training in the sport around age 6, learning their skills on smaller hills. Due to updated rules and modernized equipment, the sport of ski jumping is safer than one might expect, Rasmussen explained.

Timothy Ziegler, 15, was the only local skier from the ISC Nordic Ski Team to compete in the tournament. This was also his first time jumping on the biggest slope at Suicide Ski Bowl, having only skied on the smaller slopes.

“I’ve been skiing since I could stand, 2 or 3 years old,” Ziegler said. “When I realized I had the opportunity to do ski jumping just a few minutes from my house, I tried it, and I got good at it, and I was hooked.”

Though this would be his first jump on the Olympic-sized slope, Ziegler appeared unfazed.

“We’re so used to it,” Ziegler explained, and other skiers agreed.

Now in its 131st year, this tournament is one of the longest running competitions in the world. The ISC traces its roots in Ishpeming back to 1887, and ski jumping is iconic in the Ishpeming and Negaunee community. The ISC has produced over a dozen Olympic ski jumpers, the most recent in 1980, many of them holding places of honor in the U.S. National Ski and Snowboard Hall of Fame in Ishpeming.

Pat Petersen, the wife of ISC President Tom Petersen, was volunteering at the concession table inside the warm-up lodge, selling pasties, hotdogs and hot cocoa to spectators and athletes. Over 100 volunteers helped out with the event, which is also a major fundraiser for ISC.

“People are always willing to help out. This is our heritage,” Petersen said, adding that audience levels have only increased in recent years.

Indeed, hundreds of spectators attended Suicide Ski Bowl Tuesday, huddled around bonfires, enjoying tailgate brews and the fireworks display. Many of these audience members returned Wednesday morning to cheer on the skiers.

In addition to maintaining Suicide Ski Bowl and its slopes year-round, through their Nordic Ski Team, ISC offers ski jumping and cross-country skiing for youth free of charge. Youth can get skis, boots, helmets and coaching thanks to community donations.

Visit ishskiclub.com for more information on the Ishpeming Ski Club.