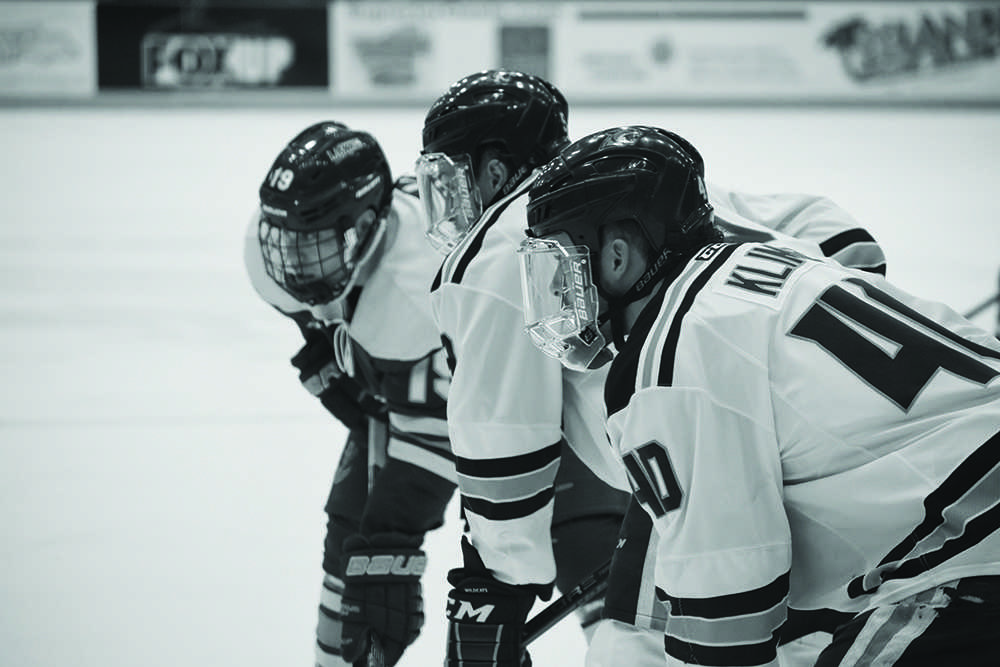 Senior Defenseman Jordan Klimek lines up at the faceoff circle, ready to start a play. The Wildcats scored six goals this weekend thanks to smart offensive zone puck movement. Photo by: Lindsey Eaton

The Northern Michigan Men’s hockey team was able to capture the Cappo Cup over the weekend, sweeping Lake Superior State University at the Berry Events Center. NMU defeated the Lakers 3-2 both nights. The two victories earned the Wildcats berth into the WCHA playoffs. The second seeded ’Cats are only two points behind first place Minnesota State Mankato with only a month to go. Northern also found their way back into the NCAA national rankings coming it at 20th.

It did not take long for Lake State to take advantage of turn- overs. LSSU was winning the races to loose pucks, as well as the 50/50 puck battles. Just 4:33 into the contest NMU conceded the first goal, a Wildcat turnover in their defensive zone turned bad when forward Diego Cuglietta won the race to the puck left of junior goaltender Atte Tolvanen. Cuglietta then beat the NMU defender to the net and fired a shot through the legs of Tolvanen.

Fifty-five seconds into the period, shortly after the power play expired, the Wildcats tied the game at one. Senior forward Robbie Payne crashed hard into the crease creating a scramble in front when junior forward Adam Rockwood blasted a loose puck on net.

Just two minutes later, Northern scored on a fast break on a two- on-one with sophomore forward Darien Craighead who let a shot go high, clearing the outreached pad of the netminder.

On the man advantage the ’Cats extended the lead by two, taking a 3-1 lead at the 8:54 mark of the second. Senior forward Zach Diamantoni, with the puck on the half-wall, gave a pass to junior defenseman Ryan Black who sent a shot chest high from the point hitting the Lake State goalie in the logo. The puck bounced to Craighead who banged home the rebound for his second goal of the game.

“Darien is a smart player with a good stick. He’s got a great body. He’s got a future. I think now the difference is early in the year, Darien was playing on the perimeter.” Head coach Grant Potulny said. “You’re going to get some points because you’re a good offensive player, but you’re not going to really dominate and now he’s willing to get to the interior.”

LSSU would close the gap to one on a power-play goal with 5:02 left in the second period. A shot from the point from a Laker defenseman ricocheted to a waiting J.T. Henke who had a wide open net to bury the puck.
The score would stay 3-2 for the remainder of the game but not for lack of trying. In the final minutes, LSSU was desperately trying to tie the game with their goalie pulled. Tolvanen made a number of big stops to keep the lead, including one with 10 seconds left with, a Laker sitting right in front of the net.
Saturday the Wildcats started slowly giving up a goal just 1:14 into the game. After an NMU turnover in their own zone, Lake State’s Cuglietta found Max Humitz in the high slot who beat Tolvanen high to the glove side with a hard wrist shot. Northern found themselves down 1-0 early again.

Just 3:29 after the LSSU goal NMU tied the score at one. Junior forward Troy Loggins moved the puck to Rockwood inside the circle left of the Laker goalie, with a beautiful cross-ice pass, he found sophomore defenseman Philip Beaulieu in a soft spot between the Lake State penalty killers and put the puck in the back of the net.

The speed of the ’Cats pressuring the Lakers kept the puck in the Lake State zone for the next 10 minutes. With a little over six minutes left in the first, freshman defenseman Adam Roeder was called for interference, putting NMU on the kill. Thirty-three seconds later Vermeulen got a five-minute major and a game misconduct for checking from behind giving LSSU a 1:27 five- on-three power play. The Wildcat penalty killers stood strong, allowing few quality chances on the Laker two-man advantage. The task was far from over, still needing to kill another 3:33 of Vermeulen’s major penalty. Once again the Northern killers kept LSSU to limited chances. With help from Tolvanen, NMU got out of the jam and into the locker room tied 1-1 after the first period.

The Wildcats took the lead 26 seconds into the second period when Beaulieu hit Loggings in the neutral zone with a pass. Loggins then weaved his way to the side boards at the blue line, then across into the LSSU zone near the top of the circles, firing a shot just underneath the crossbar. Just under five minutes later, LSSU evened the score 2-2 with a point shot that bounced into the NMU net off Lake State’s Brayden Gelsinger who was driving hard to the back post.
It was more of the same in the second, the Northern speed and pressure on the forecheck created chances and caused problems for the Laker defenseman. Despite the domination, the score after two was 2-2.

NMU put a flurry of shots at the target in the opening minutes of the third. With 8:19 into the final period of the weekend, NMU took back the lead when Beaulieu, Loggins and Rockwood hooked up again. A stretch pass from Rockwood sent Loggins in on the net, after missing the opportunity Loggins got the puck back and sent it out to Beaulieu at the point. He wound up and set off a rocket, going bar in for his second goal of the game.

The score would remain the same for the rest of the game. An LSSU power play with 2:29 left prompted them to pull the goalie. It was a six-on-four advantage. Tensions were high as the Lakers sent shot after shot at the Northern net but none got by Tolvanen and the game ended in a 3-2 NMU win. The Wildcat penalty kill was key in the victory. Rockwood’s two assists on the night put him in a tie for most in the NCAA.

Northern Travels to Anchorage, Alaska this weekend to take on the Seawolves.