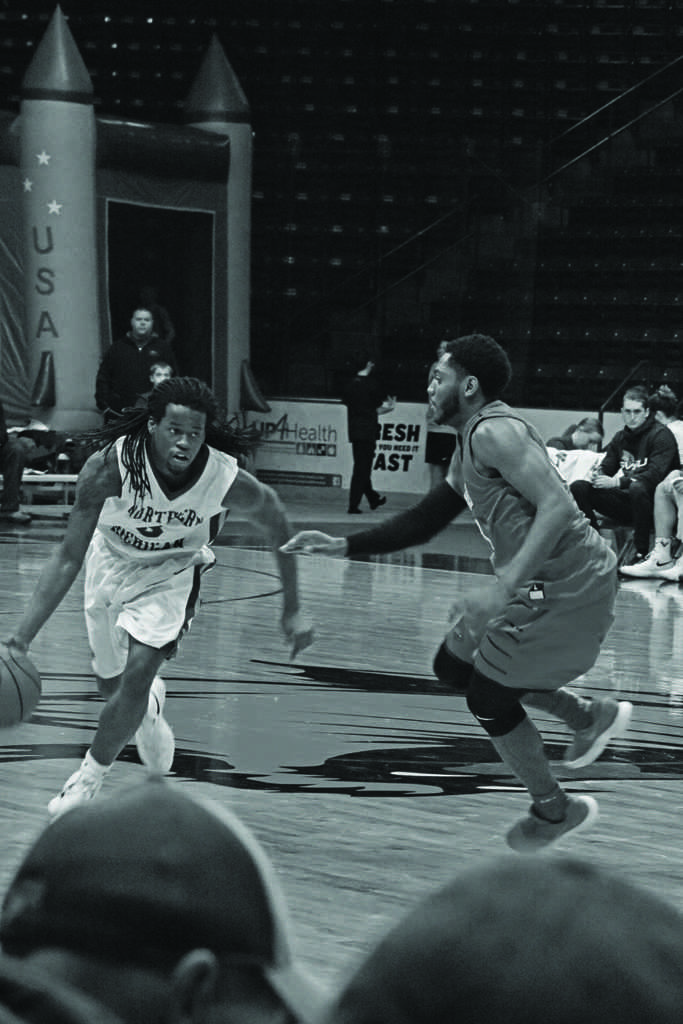 Guard Sam Taylor dribbles near halfcourt. This photo was taken from a previous home game. Photo by: Lindsey Eaton

On the road with a three-game losing streak stretching from last weekend, the Northern Michigan Men’s Basketball team rebounded with a sweep at Wayne State University (83-74) and at Davenport University (91-82).

Last Saturday at Wayne State, the game began with a close first half. NMU tied the game at 30 with less than a minute left, but Wayne State would hold on to lead 35-34 at half.

The Wildcats’ second half started off with 19-0 run in the early minutes. The Warriors would go on a 10-0 run themselves, but junior guard/forward Isaiah Johnson’s free throw and three-point baskets helped to extend the Wildcats’ lead. The Warriors trimmed the Wildcats’ lead to six, but NMU secured a 83-74 victory from the free- throw stripe.
Johnson shot a new career high of 30 points in the game, while Echols finished with 20.

Last Monday at Davenport, the start of the game was tightly contested. After a Panther 9-0 run, Johnson, Perez and sophomore guard Marcus Matelski responded with three straight NMU three-point shots to close in on the Panthers lead.
With eight minutes to go and the Panthers leading 25-21, Johnson’s strong defense and perimeter shooting brought NMU back up to 31-23. However, Davenport wouldn’t go away quietly as the Panthers shed their lead to three, but the Wildcats would take a seven point lead to half.

The Wildcats continued to hold their lead for the rest of the game, with Johnson sinking the team’s 12th three-pointer while free throws from Echols and sophomore guard Sam Taylor sealed the game at 91-82.

Five Wildcat players finished in double digits as Johnson led the team with 21 points and Echols scoring 18.
The Wildcats will look to earn their first sweep in the Bill Sall era over their archrivals, the Michigan Tech University Huskies. A win in Houghton could also be their first at Tech since the 2014-15 season.

The first game back in December saw the Wildcats turning the ball over just two times, while coming up with nine steals from the Huskies. Four NMU players were recorded in double figures as Echols led the Wildcats with 21 points, followed by senior guard Eddie Tornes with 20.

Tech’s Kyle Monroe shot in a double-double in the game, chipping in 24 points along with collecting 11 rebounds.
The Wildcats are standing in third place in the GLIAC conference standings, both in the North division and overall. The Huskies are ranked fourth in the division and sixth overall, but will look to spoil NMU’s record up in Houghton on Sunday.