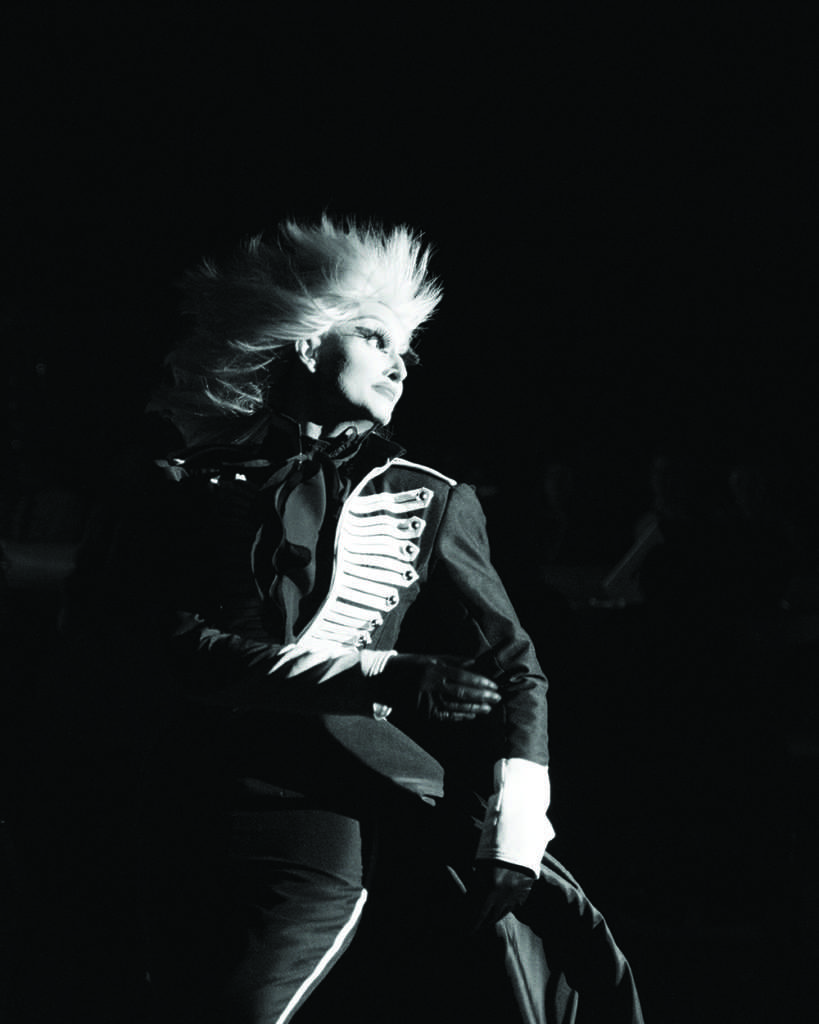 Queens and kings perform on stage before a cheering crowd at the Vandament Arena for the 22nd Annual NMU Drag Show on Jan. 26, hosted by the student diversity group Queers & Allies. Photo by Neil Flavin

The time was 6:36 p.m. on Friday, Jan. 26, only a little less than an hour until NMU’s 22nd Annual Drag Show started. Hundreds of students lined up outside the Vandament Arena, eagerly awaiting to watch the six professional kings and queens perform, all based out of Chicago. Music filled the crowded hall, while the queens and kings prepared for the show. It was a night of entertainment for the students of NMU, as the event celebrated all of Marquette’s diverse community.

The show, put on by Queers & Allies, an LGBTQA+ club on NMU’s campus, was jam packed with a little of everything. The performances ranged from high-energy music that had the crowd dancing along with the queen or king, to other performances having nearly all the audience in tears. Each king and queen brought something unique to the catwalk every time they stepped onto the stage. The ultimate goal of the event was to celebrate all of the people NMU has to offer.

The first professional queen to perform was Marquette’s own Aurora Gozmic. A graduate of Gwinn High School, Gozmic started entering drag shows here at NMU at the age of 16. For the past few years, she has been bringing kings and queens from the Chicago area to Northern’s campus.

“I have been in the Chicago area for about three years now. It has been humbling to come back here to perform, and it feels good to bring these girls all the way from Chicago to my hometown,” Gozmic said.

Gozmic’s performances of the night included lip-syncing to punk-rock band My Chemical Romance’s “Welcome to the Black Parade” and “Teenagers.” A highlight was the moment she opened up her umbrella and showered the stage with black confetti.

Drag queen The Vixen’s “Black Girl Magic” themed performance was a standout act that had the audience out of their seats. With The Vixen’s skillful dance moves, the crowd was undeniably hers. However, it was not just her dancing that had students out of their seats. In her last performance, The Vixen lip-synced to a Porsha Olayiwola poem titled “Angry Black Woman.” The Vixen mouthed the sentence, “I’m mad, because above everything, at any given time and in any given space, I, as a black woman, can suffer from racism, sexism, homophobia, classism.” The entire crowd roared and cheered along as Olayiwola’s words boomed through the speakers.

Queers & Allies President Erica Krause, a senior criminal justice major, said Queers & Allies brought in Black, Latinx, Native and other queens so that students can relate. She also stated that the show expressed intersectionality, which is the interconnected nature of social categorizations such as race, class and gender.

“Students need to hear The Vixen repeating Porsha Olayiwola’s poem about being an angry black woman, and need to see that the word ‘intersectional’ isn’t just some definition from a textbook,” Krause said.

Mary Malaske, a senior nursing major, said she enjoys going to the drag show every year.

“This was by far one of NMU’s best shows. The show this year really brought a diversity of acts and high energy to keep the crowd engaged,” Malaske said.

Other performances by drag kings Dusty Bahls and Tenderoni kept the energy alive with humorous acts and costumes such as a banana suit. Alongside them was the drag queen Kat Sass who brought the house down with a Nicki Minaj tribute.

The show ended with all the kings and queens on stage singing along to “Unwritten” by pop artist Natasha Bedingfield. The song followed along with the theme of the night, as it portrays the meaning of setting oneself free no matter who you are: the ultimate message of the NMU 22nd Annual Drag Show.