Friendly food for a friendly neighborhood 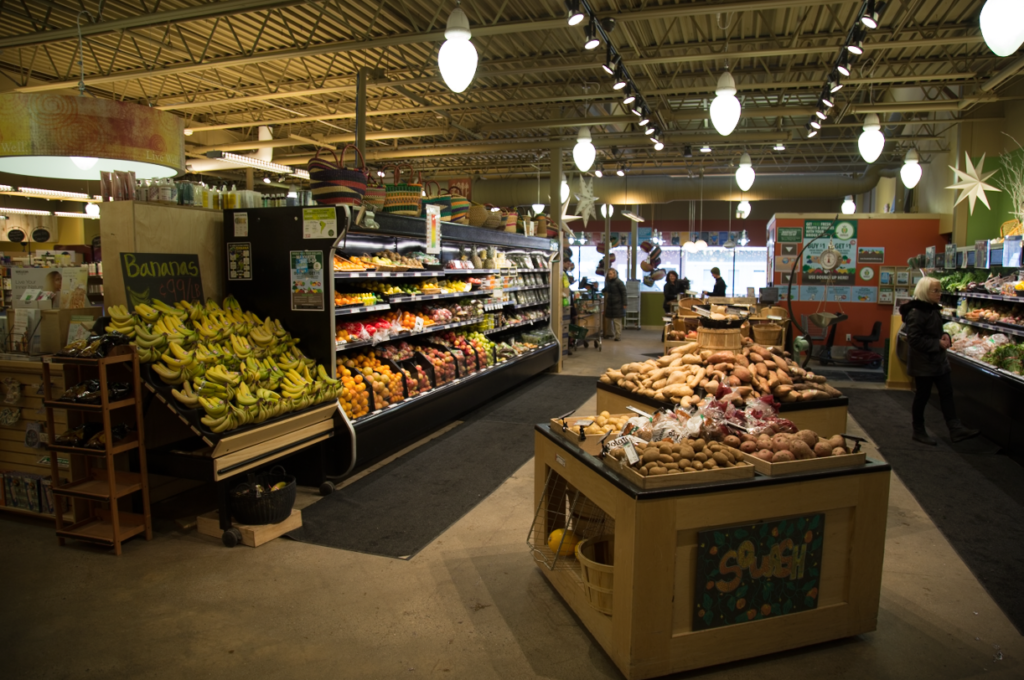 A variety of nutritional produce found at The Marquette Food CO-OP.

An array of spices greets you as you walk past the sliding doors. Soft lights ascend onto aisles of various items from basic essentials to shelves of home remedies. You can stock up your refrigerator with whole and natural foods or observe historic Washington Street and sip on a bowlful of hot soup in the lounge area. Aisles are stocked with locally grown food, and there’s a sales associate ready to fill you in on the nutritional information packed inside each product. This is the Marquette Food Co-op.

Since 1971, the Marquette Food Co-op (MFC) has been serving Marquette residents with fresh produce, locally grown and raised, all natural and organic based items. The MFC, which is community-owned, started out as a buying club made up of a few families and has expanded into a local center in the Marquette community, said Matt Gougon, the general manager.

“The things that drive us are about an individual’s overall well being whether they’re coming in for the first time, whether they work here, whether they’re a partner organization or agency we really want the best for everyone,” Gougon said, adding, “And that stuff really resonates with the community.”

The MFC was one of the first stores in the Upper Peninsula to start selling all- natural foods, he said. At the time, there wasn’t the availability of whole and natural foods as there is now, so the first owners had to make trips to People’s Warehouse in Ann Arbor to pick up food and deliver it back to Marquette, he said.

Over the next couple of decades, the MFC developed from a “tiny storefront” into a “modern facility,” Gougon said. After relocating in 2002 from West Washington Street to West Baraga Avenue, business increased significantly within a few years which led to the decision to relocate and expand its current location on West Washington Street, he explained.

The result of the expansion not only provided a larger storefront but attracted other businesses as well and furthermore, drew in “more traffic,” Gougon said. But the growing amount of consumers also changed the landscape for business in Marquette, he noted. While other businesses strive to earn the top dollar, the MFC is mainly concerned with accommodating customer needs like providing all organic or locally grown products on their shelves that other stores can’t offer, he said.

“We have this direct line of communication with our shoppers. You do not have to be a member to be a shopper here,” Gougon said. “The biggest benefit is knowing you invested in a driving business in the heart of your town that you have equal say in as any other member at the co-op.”

However, members have the ability to vote, access to special ordering and reduced pricing on goods and classes, Gougon said. The MFC differs from other organizations in Marquette, he said, by having a direct input system from consumers and a staff of employees who are knowledgeable in all the products.

With over 85 employees, including a dozen NMU students, the MFC serves as downtown Marquette’s “No. 1 employer,” Gougon said. The MFC operates on fulfilling a policy of various principles, but its main focus is centered on making lasting connections with its members, he added.

The MFC is founded on community wellness and provides Marquette with sustainable efforts while still supporting local services, Gougon said. It’s not only a place to grocery shop but there are also many services offered here such as cooking classes, free yoga sessions and live music every Sunday afternoon, along with hot food and drinks, he explained.

“We play an interesting role in the community. We’re a grocery store but you can also sit down and have a nice hot meal,” Gougon said. “We really are kind of a crossroads for all things food in Marquette and throughout the U.P.”

To learn more about products or events happening at the MFC, visit the co-op’s website marquettefood.coop.