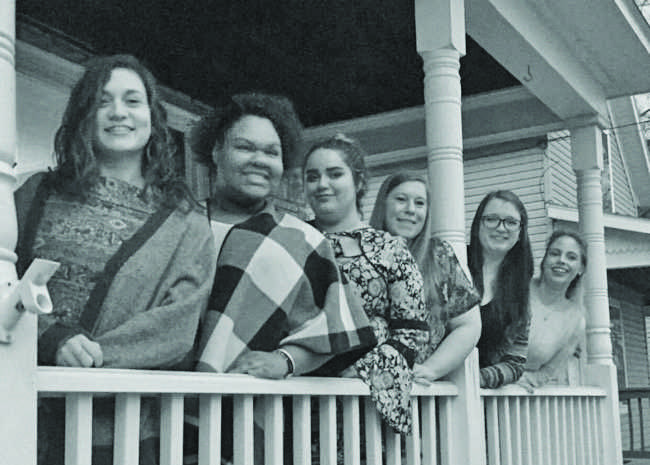 The sorority sisters of the NMU chapter of Kappa Xi Delta will be recruiting new members during Feb. 12 to 17 Photo coutesy of Caitlin Miner

NMU is now home to three different sororities and the newest chapter to join the student body is Kappa Xi Delta. The six ladies currently in Kappa Xi Delta work together to strive toward academic excellence while focusing on social and practical developments along the way.

Themes of the chapter’s goals include professional, social and personal development and community involvement. Each month they hold a formal meeting, where they dress up in business attire in preparation for future business endeavors, said President Caitlin Miner, a senior economics major.

“We try [to] have practices that help our members be more prepared for professional life,” Miner said. “We also focus on well-rounded social learning, where you gain experience working with people you don’t necessarily agree with all the time.”

The sorority sisters each have roles. These obligations range from academic chair, whose goal is to track and maintain academic achievements and advancements, to social chair, who is in charge of planning inter-Greek events and or small gatherings like movie or craft nights for the sisters.

With recruitment approaching, there are a lot of things to be done, said Vice President and Recruitment Chair Michaela Harris, a junior biology major. The theme for Kappa Xi Delta’s recruitment this year will be their colors, robin’s egg blue and silver.

“I love crafting, so that’s basically what I’ve been doing for recruitment preparation,” Harris said. “There is a lot of fun stuff coming up.”

Recruitment week for Kappa Xi Delta will be from Feb. 12 to 17, excluding Valentine’s Day.

“Each day of recruitment will have a different focus,” Harris said. “We will focus on scholarship and philanthropy, letting them know what we do as an organization.”

Recruits will be educated on the sorority’s academic obligations of dedicated study time and community outreach efforts, as well as a sisterhood day when they will cover all the bonding activities the ladies get to do together, Harris said.

“We help out at the Women’s Center, volunteering and we donate when we can,” Broquet said. “We have an upcoming clothing drive. I have a big car, and I want to see that car full.”

All of the active sisters of this chapter were previously members of Kappa Beta Gamma, Miner explained. Then, after some difficult deliberation, the group decided to disband that chapter due to differences they had with the national organization. However, they wanted to maintain the sisterhood bond they had formed throughout their previous years together, Miner said.

They were able to connect with some other former Kappa Beta Gamma ladies from the University of Minnesota-Duluth (UMD) who are the founding chapter of Kappa Xi Delta. After some difficult decisions regarding the next steps toward pursuing their sisterhood, the group reached out to UMD and were offered membership in Kappa Xi Delta. They became the second chapter to exist and were accepted back to Northern as a Greek organization, Miner said.
There is a lot of work, both collaboratively and individually, that goes into being a Kappa Xi Delta sister, but it is all for personal development and connection as a group.

“Working together and getting things done with people who you have a really good time with,” Miner said. “Sometimes it’s hard to get things done because you’re talking and laughing too much.”