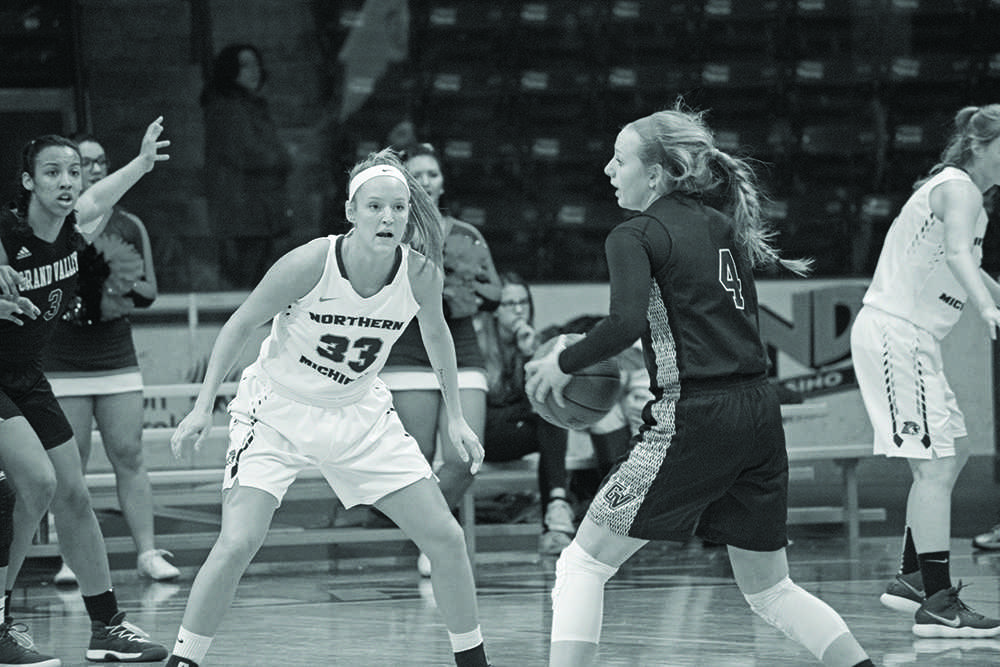 Junior guard Tess Weatherly stands tall against GVSU’s Jenn Deboer. NMU was able to stop the Lakers in the first half, but had trouble scoring in the final 20 minutes. Photo by: Lindsey Eaton

“We need to be able to beat good basketball teams in order to move up the rankings,” head coach Troy Mattson said.

Freshman guard/forward Lexi Smith scored the first points of the game Thursday against Purdue Northwest. After a PNW basket, Smith converted another jumper, followed by a three- pointer. NMU was up 12-5 at the 4:41 mark after the fast start. The Pride responded with a three, which the Wildcats followed with a Smith three-pointer and a jumper from sophomore forward Erin Honkala to make it 19-9. At the end of the first frame, the score was 19-11 with the ’Cats in the lead.

Junior guard Emily Schramek knocked in back-to-back threes to move the Wildcats ahead 25-11 to start the second quarter. Sophomore forward/center Jessica Schultz scored her first basket of the game to end a six- point run by the Pride, making it 27-17. Purdue answered with another six-point rally to pull within four with just over five minutes to play in the first half. Northern went on a 9-4 run to end the quarter, taking a 36-27 lead into halftime.

Schultz opened the third quarter with a score, and PNW responded making it 38-32. Schultz hit another layup, followed by two-straight threes from sophomore guard Baleigh Delorit to give NMU their largest lead of the game, 46-32. The Pride ended the quarter on an 8-3 run to make the score 49-40 after three quarters of play.

Purdue Northwest rallied into the fourth quarter as they meticulously ate away the Northern lead, cutting it to 49-45 with 5:25 left to play. The teams traded baskets until Dillinger and junior center Taylor Hodell scored back-to-back baskets. Schultz was fouled and sank her free throws, putting NMU in the lead, 60-51, and securing the Wildcat victory.

Leading the Wildcats in points was Smith, who finished with 12 points. Schultz and Schramek both chipped in with 10 points each.

Another quick start on Saturday for the ’Cats put them ahead 9-4 to start the game against Grand Valley State. The Lakers cut the score to one point before Dillinger knocked down a three-pointer to make it 13-8 with 3:14 to go in the first quarter. The Lakers hit a pair of free throws as NMU took a 14- 10 lead after the first quarter.

Both teams started slow in the second quarter, combining for eight points in the first seven minutes. GVSU rallied, but a jumper by Honkala, with 2:44 left in the frame, had NMU ahead 23- 19. The Lakers responded with a three-pointer to pull within one, and Smith answered with a two- point jumper. Schultz hit a three in the final seconds before the buzzer to make it 28-22 NMU after the first half.

GVSU buckled down on defense in the third quarter, only allowing the Wildcats to score four points. The Lakers rallied back and jumped up to a 35-32 lead heading into the fourth quarter. In the final frame, strong offense and suffocating defense from GVSU was too much for ’Cats, who would lose 38-52.

“We ended up with a disappointing second half against Grand Valley,” said Mattson. “This is basketball, people. The ball is supposed to go in the basket. There is nothing else.”

Smith put up double-digit points for the fifth-straight game, and 13th time this season, leading the Wildcats with 10 points.

Northern Michigan hits the road with trips to Northwood University Thursday followed by a game against Saginaw Valley State University Saturday. The Wildcats brought their season record to 10-12 on the season and are 6-8 in the GLIAC standings.