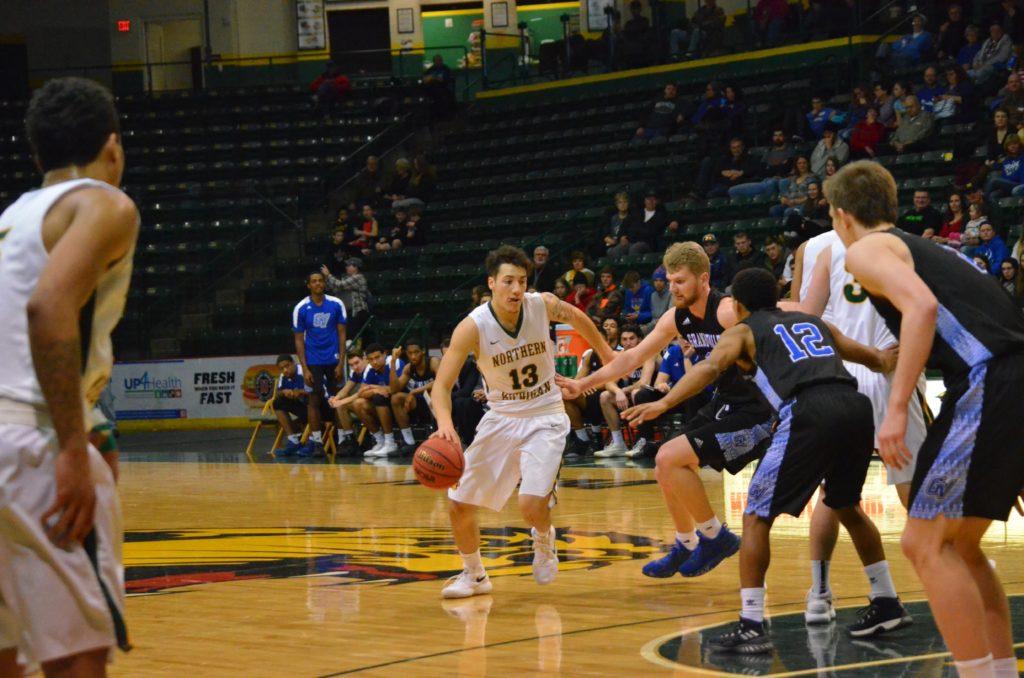 The Northern Michigan Men’s Basketball team returned home with a statement-making sweep as they defeated the Purdue Northwest University Pride 90- 74 and the Grand Valley State University Lakers 85-75 in come- back fashion.
“Not only did I appreciate good basketball, but a truly unique atmosphere,” head coach Bill Sall said on the weekend. “That’s the loudest I’ve heard in the Berry since I got here.”

The Grand Valley game also featured a highlight reel three- point basket from junior guard Naba Echols. The play saw Echols dribble left behind the three-point line, but was knocked down by the GVSU defender. Echols picked up the loose ball and banked the ball into the basket while crouching on one knee. It is what Sall said was “drawn up with luck.” Echols shot spread through social media and was featured on SportsCenter’s Top 10 Plays of the Day.

“I don’t think I witnessed a play like that in my life, but we’ll take those three points no matter what,” Sall said.

“If I was to be completely honest, I was mad that he made the shot but it was all good,” Mack said with a laugh.

Northern Michigan’s 13th win overall and 10th in conference play marks the team’s most since the 2006-07 season. Mack said the team is capable of more wins.

“I honestly think we could’ve done better,” Mack said. “Yes, we’re humble about them, but at the same time, we want more.”

Last Thursday, the Pride started the game off with an early lead. Sophomore guard Sam Taylor lifted the Wildcats, who scored five straight points to give NMU its first lead of the game. Sophomores forward Will Carius and guard Marcus Matelski erupted from the three-point line, scoring three-straight shots to extend their lead. PNW’s pressuring defense began to slow NMU, but the Wildcats went into the break up 41-26.

Junior guard/forward Isaiah Johnson’s three-point shot jump started NMU out of the second half, but PNW answered with eight straight points. Matelski hit his fifth three-point basket of the game to help extend NMU’s lead. PNW cut NMU’s lead down to 17, but dunks by Carius and freshman forward Dolapo Oli- yanka helped secure a 90-74 win for the Wildcats.

Carius finished with a season- high 21 points, followed by John- son with 18.

Against Grand Valley, the Lakers’ hot shooting propelled them to a 17-6 early in the game. Carius brought the Wildcats back to within two with back-to-back threes. GVSU responded with another run of their own. Both teams would swap baskets before the Lakers took take an eight- point lead into halftime.

Seeking a second half comeback, the Wildcats seized momentum early with a 13-0 run. A Matelski three and a layup by senior guard Jordan Perez tied the game up at 48. An 11-point run gave the Wildcats the lead, capped by Echols acrobatic, high- light reel shot. After NMU commited a technical foul, GVSU climbed back to within six, but Carius and Johnson’s free throws secured NMU’s victory at 85-75.

The Wildcats head out for their final road trip of the season, visiting the Northwood University Timberwolves Thursday night followed by the Saginaw Valley State University Cardinals Satur- day. The Wildcats are looking to wrap up their road schedule with two quality wins.

“We’re going to take it one game at a time. I’m really looking forward to finishing our last trip and getting these last two wins and be back home,” Carius said. “These road trips take a lot of you.”

Sall said the road games will be significant for the team. “That’s the tough thing about going on the road. We’re playing two teams that had some good wins recently,” Sall said. “By going into their environments, we have to be ready to play.”

Northern holds third place in the GLIAC conference standings, one point above fourth-place teams Michigan Tech and Wayne State University. NMU hits the road this weekend, then comes home to play its final four games of the season before the playoffs start.