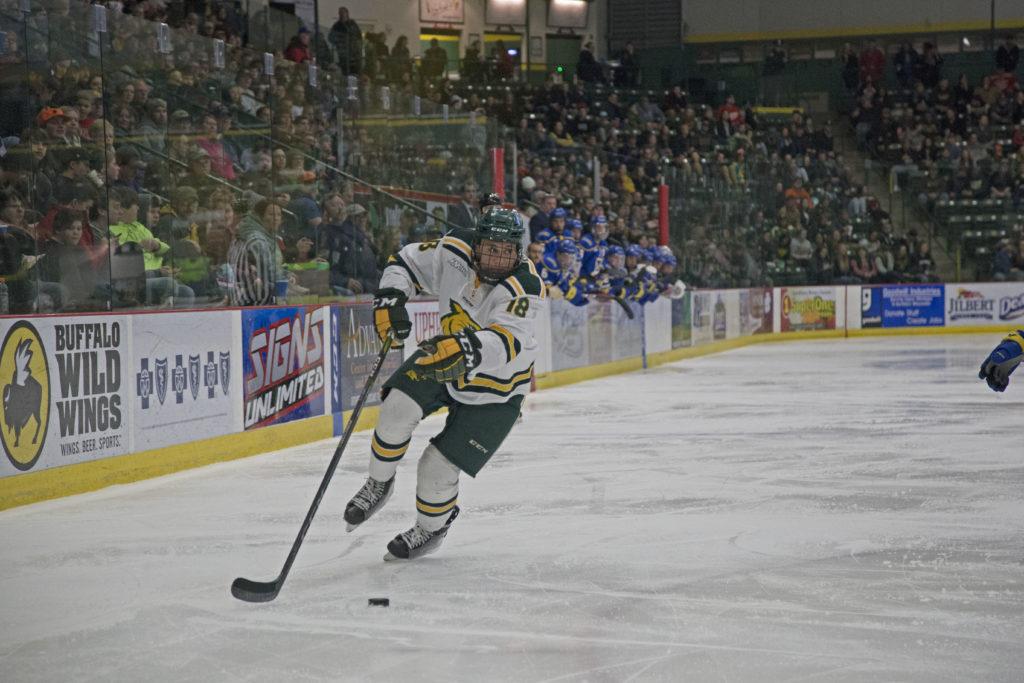 Photo by: Lindsey Eaton/NW Junior forward Adam Rockwood drives into the offensive zone, trailed by a University of Alaska-Fairbanks defender. Rockwood finished the weekend with three points, registering a goal and two assists, while also leading the team with 29 assists this season.

The Northern Michigan University Hockey team picked up two more wins last weekend against the University of Alaska-Fairbanks Nanooks (UAF), propelling the Wildcats into a much-needed bye week this weekend.

As a result of the sweep of UAF, which included a 2-1 overtime win on Friday before a 4-1 win on Saturday, the Wildcats (20-11-3, 18-6-2-2 WCHA, 12-2 at home) maintained their position at the top of the Western Collegiate Hockey Association (WCHA) standings, remaining one point ahead of Minnesota State University-Mankato.

The sweep also moved the Wildcats up to No. 17 in this week’s USCHO.com Division I men’s ice hockey poll, jumping three spots from last week.

As if the national accolades weren’t enough of an accomplishment, Saturday’s win also earned the Wildcats their first 20-win season since 2009-10, and are one of four teams in the country so far to hit the 20 win plateau this season.

NMU head coach Grant Potulny said his team came alive on Saturday after not playing to their full potential the last few weeks, despite picking up victories.

“I’m happy with the result and at the end of the day, you want to make sure you win the games,” Potulny said. “I didn’t think we’ve been playing very good and I thought it was a stretch. I didn’t like our games in Alabama. I thought we were just OK in Alaska (Anchorage), and OK against Lake Superior State, so there’s been a stretch of games I didn’t think we played very well.

“So to have our energy back and our passion and physicality and competitiveness, that’s what I thought was important, and we had that back on Saturday.”

Asked about playing down to the competition, Potulny said no opponent can be taken lightly this late in the season.

“Early in the year, maybe if you have more talent or you play a little bit faster than the other team, they’re going to make mistakes and you’re going to capitalize,” he said. “You get to the end of the year and the coaches have sunk their teeth into their guys for that long of a stretch, there’s no easy ice. Between ninth, eighth, seventh and sixth, there’s four points between them so that’s one game for a lot of them, so they’re playing for their lives too.”

Friday’s game against the Nanooks (11-17-2, 9-14-1-1 WCHA) was a defensive battle and featured strong goaltending on both ends, with UAF sophomore Anton Martinsson putting aside 22 of 24 NMU shots while NMU junior Atte Tolvanen backstopped 17 of 18 Nanook attempts.

Neither team saw a goal until the second period, when NMU junior defenseman Ryan Black found freshman forward Joseph Nardi on the power play to put the Wildcats on the board. Just 21 seconds later, the Nanooks tied it 1-1 when a puck rang off of the crossbar, causing Tolvanen to scramble with UAF senior forward Tayler Munson, eventually putting it into the open net.

The Wildcats had to kill off three penalties in the third period, one of which was a five minute major for contact to the head, before UAF took a penalty with 62 seconds to play in regulation.

The Wildcats capitalized on the chance in overtime, with junior forward Adam Rockwood firing a shot which deflected off of the stick of junior forward Denver Pierce and over the shoulder of Martinsson to give NMU the victory.

Saturday was closely contested as well, with NMU jumping out to a 2-0 lead on goals from Pierce and Rockwood. Alaska pulled within one in the third on a goal from sophomore forward Kyle Marino on a shot that trickled past Tolvanen.

It was a one-goal game for a majority of the third, but shortly before UAF was about to pull Martinsson for an extra skater, the Wildcats had something to say about that.

Nardi skated up the right boards and spun around to move past a UAF defender. Nardi then fed the puck to sophomore forward Darien Craighead who fired it in from the slot to all but seal the victory for the Wildcats. UAF pulled Martinsson after that and senior forward Robbie Payne added the empty netter.

While NMU did its job to remain in first place, they’ll need some help if they want to stay there this weekend.

Over the bye week, 7 of 10 WCHA teams will be in action, with Minnesota-Mankato hosting Ferris State. If the Mavericks can pick up two points this weekend, they’ll overtake the Wildcats for the top spot.

As it stands, NMU has locked a top-three spot at the least, but can lock the No. 2 spot, should third-place Bowling Green get three points or less at Alaska-Anchorage this weekend.

Potulny said he wants to bring his players up to their maximum potential in the home stretch of the season.

“We’ve had a group of guys that haven’t had long runs before, so I need to help them through this,” he said. “These are the games, they’re competitive, and one mistake and your season is over. I want to give this team an opportunity to reach its potential. I think we have a really good team and I think we can play 10-12 more games, but the reality is you’re only guaranteed four right now.”

The Wildcats return to the ice at 7:07 p.m. Feb. 23 for a home game against the Michigan Tech Huskies.

Fans are reminded to vote for Payne for the Hobey Baker award, given to the top NCAA ice hockey player, at www.hobeybaker.com. Votes can be cast once every 24 hours. Payne is third in votes, with the top 10 vote getters advancing to the second stage of voting, starting on March 14.