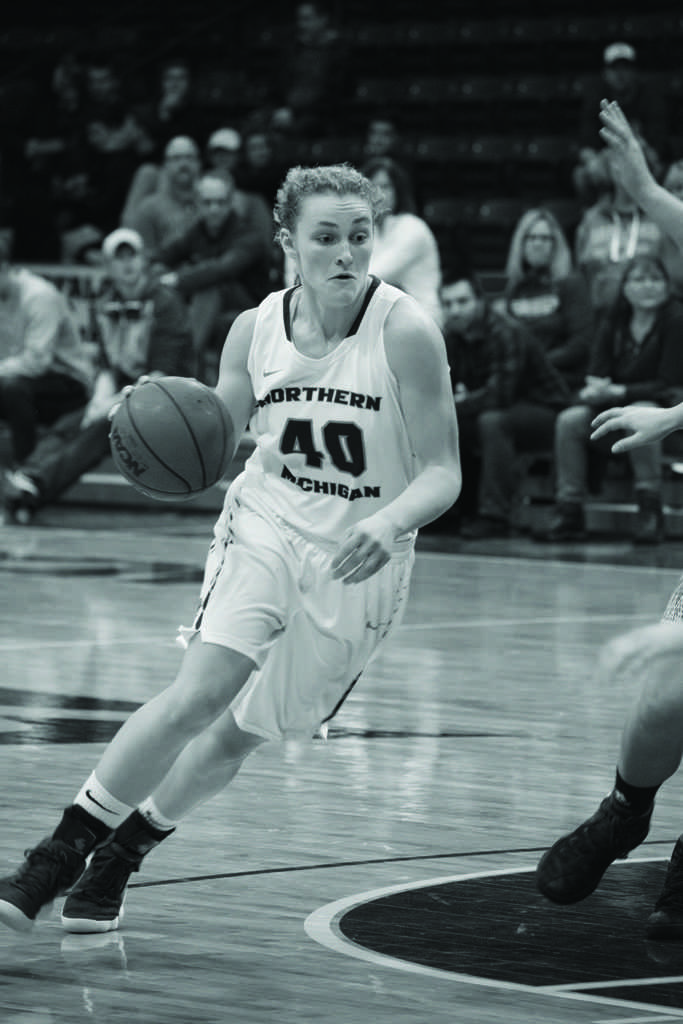 Thursday’s game opened with a 12-4 run for the Timberwolves. Junior center Taylor Hodell made two layups, ending the run for NU, with the score 12-6 with 3:54 to play in the first quarter. Sophomore forward Jessica Schultz made a layup in-between two three-pointers by Northwood, with the Timberwolves leading 18-8 after the first period.

The Wildcats closed the gap with NU, making the score 24-17 with three minutes to play in the half. Another seven 7-0 run for NMU tied the game 24-24. However, the Timberwolves hit a three ball in the final seconds to take a 27-24 lead into the break.

In the first four minutes of the third quarter, NU extended their lead to six, 32-26. NMU tied the game at 36 with 4:40 left in the quarter, but the Timberwolves ended the quarter with a three-point play to take a 39-36 lead into the final frame.

Northwood scored twice to open the fourth quarter, pushing the lead to seven, 43-36. The teams traded baskets until Schultz scored four-straight points for NMU, making it a one-point game, 48-47 with 3:51 to go. The teams exchanged baskets with 2:13 to play, Northern down one, 52-51. NU scored to go up 56-53, with just six seconds remaining. The Wildcats attempted a three-pointer at the buzzer, but fell short, resulting in a 56-53 NU victory.
A slow start in the first quarter proved to be the downfall for Northern against a good Northwood team.

“We got down early but played extremely well after that,” Mattson said.

Schultz led the Wildcats with 16 points and five rebounds. Hodell added 12 points and two blocks. Freshman guard Lexi Smith chipped in with 11 points and led the team with four blocks and six rebounds.
Saturday’s game against SVSU started with a 7-3 run for the Cardinals. Hodell sank two free throws to pull within two. The teams traded baskets until the buzzer sounded, ending the quarter with the score 18-12 in favor of Saginaw Valley.

NMU started the second quarter quick, cutting the deficit to 18-17 just over a minute in. The teams alternated baskets, with NMU taking the lead 22-20 with 7:11 left to play in the half. SVSU answered with a 12-point run to go ahead 32-22 with 3:28 to play in the quarter. Junior guard Emily Schramek and sophomore guard Baleigh Delorit hit back-to-back three-pointers to close out the first half. The score was 36-30 heading into halftime with the Cardinals in the lead.

Northern cut the lead to 38-36 early in the second half. The teams continued to trade baskets for the next two minutes until Smith made a layup to tie it 42-42 with 5:29 to play in the quarter. The Cardinals ended the quarter by hitting a three-pointer, taking a 50-47 lead into the fourth.

Northern started the fourth quarter strong, tying the game with 5:54 to play. The teams traded three-pointers, bringing the score to a 58-58 tie. NMU took a five point lead, 63-58 with 1:32 to play. SVSU brought the game within one, but four clutch free throws secured the Wildcats’ victory, 67-62.

“People need to make shots and make plays,” said Mattson. “People are getting the job done.”

The ’Cats have four games left on their schedule before playoffs, all home games. NMU has a game tonight at 8 p.m. against last place Lake Superior State, and Saturday against Ferris State University.
The Wildcats are tied for sixth place in the conference with Ferris State. Teams that place in sixth or above will host a home playoff game, something the women Wildcat basketball team hasn’t done since 2013-14.