Conference race heats up with one week remaining 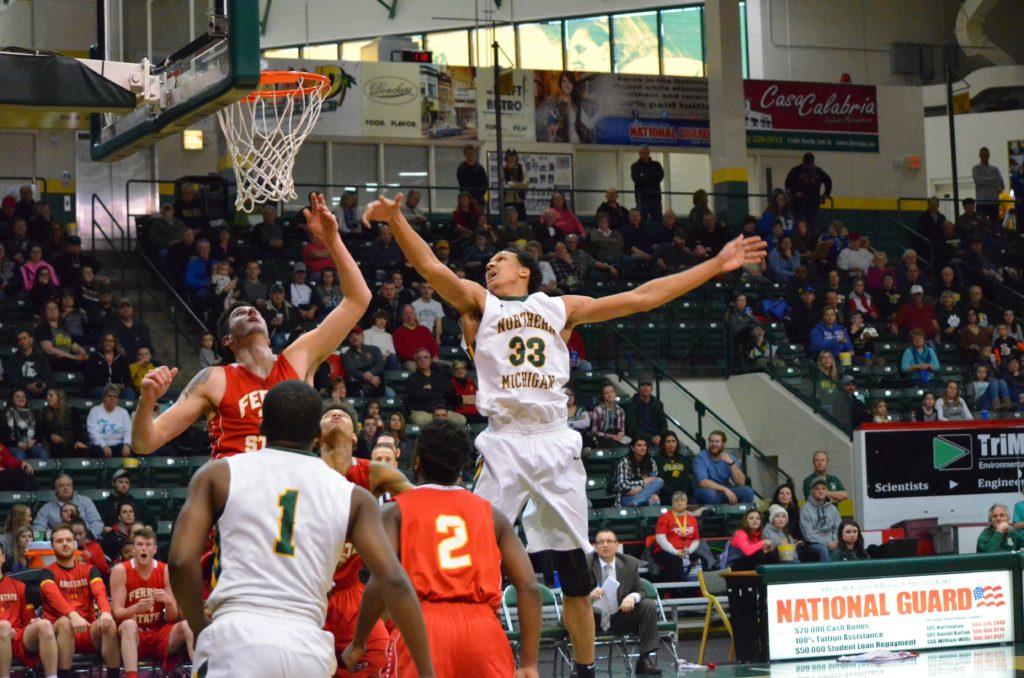 “We played hard but, when you play against good teams, it comes down to the small things,” Sall said. “Our effort was there. We played well as far as executing. We only [gave away] five turnovers in both games.”
The teams lone senior, guard Jordan Perez, said the team played up to their limits on the weekend.

“We battled hard, but we didn’t come up in areas that we needed to be good at during those games,” Perez said. “To play those games, we gotta be on our P’s and Q’s for the whole 40 minutes, but we just weren’t.”
LSSU came into Thursday’s contest two games ahead of NMU in the conference standings. The Wildcats battled hard against the Lakers early in the game, with LSSU maintaining an early lead. Junior forward Will Carius tied the game at 22 points, after he converted his jump shot and free throw after being fouled. The Lakers jumped out to a 37-28 lead after back-to-back three-point jumpers from junior guard Tim Cairnduff. NMU fought back in the subsequent minutes in the half, trimming the Laker lead down to one with back-to-back layups from Carius. LSSU snuck in a basket in the final seconds of the half to take a 39-36 lead after 20 minutes of play.

Lake Superior came out red-hot early in the second half, growing their lead to 12 points. With less than nine minutes remaining, NMU seized the momentum, finding itself down by only a point again, 63-62 with Perez scoring eight straight points. Both teams swapped baskets for the next five minutes before LSSU, behind a 7-0 run, pulled away from the Wildcats and won 80-68.

Carius finished with 21 points for NMU, his third 20-point game in five games. Perez and junior guard/forward Isaiah Johnson followed up with 14 points each.

Saturday’s game against Ferris featured a high-powered Bulldog team, who came into the contest ranked third nationally in the NCAA Division II polls. NMU got things started with Carius scoring a three-point shot. Ferris answered with six straight points, highlighted with a dunk from Ferris State sophomore center Myles Howard. Junior guard Naba Echols would score eight of his 11 first half points to close out the half, with the Wildcats trailing 39-32.

In the second half, Ferris separated from NMU after a slam dunk from Bulldog center Zach Hankins to make it 50-36. Down by 11, and with 10 minutes remaining, NMU saw its bid for an upset coming to a close. The Wildcats pulled the score within eight points in the later stages, but it wasn’t enough, as the Bulldogs cemented a 98-84 win.
Echols finished the contest with a season-high 30 points, while Carius recorded 17 to go along with eight rebounds.

“In both games we got beat up bad on the offensive rebounding. If you want to look at that one stat, it had certainly killed us without a doubt,” Sall said.

Next up on the schedule for the Wildcats is a home game tonight at 6 p.m. against Davenport University. Davenport is ninth in the conference standing and is in a tight race of their own to secure a playoff bid.
NMU wraps up its regular season when they host Wayne State at home for senior night, tip off at 1 p.m. NMU currently sits in fourth place in the GLIAC, one game behind Wayne State for a chance to clinch a home playoff matchup. One game behind NMU lurks Michigan Tech and Ashland University.

Sall said the team can clinch a home playoff game if they win out.

“The wonderful thing for us is we control our own destiny. We win these two games, we got the third seed and we have a home playoff game,” Sall said.

Jordan Perez will be honored before the start of Saturday’s Senior Day festivities. Perez is the only senior currently on the Wildcats roster and he’s looking forward to being recognized in front of his family and teammates.

“I’m excited to see my family, and some people haven’t seen me play yet. So it’ll be pretty cool for them to be up here for the first time,” Perez said.