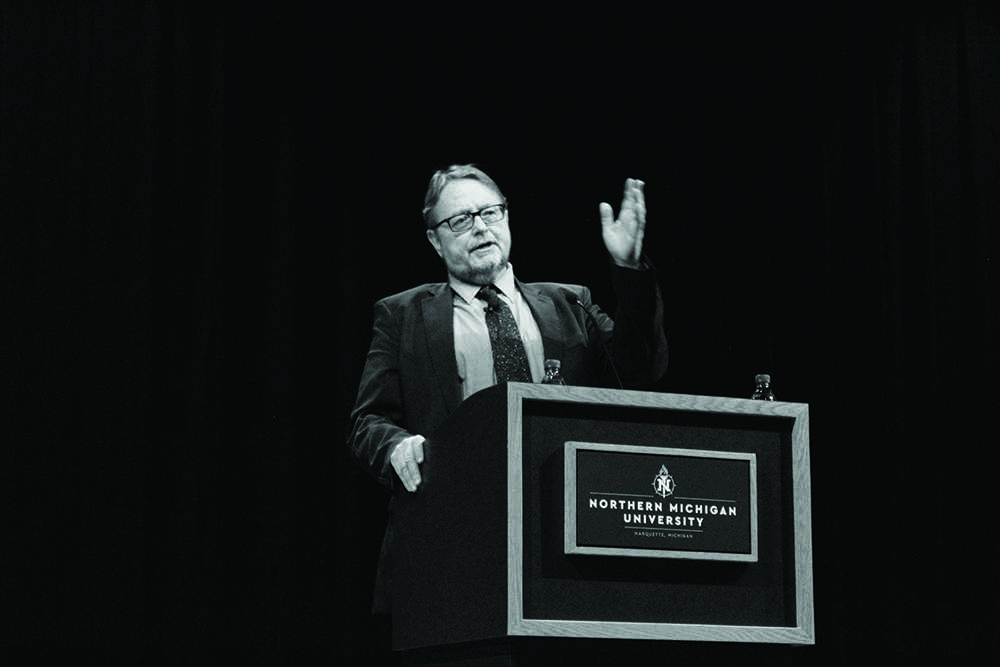 Award-winning, Mexican American author Luis Alberto Urrea tells tales of his childhood joys and struggles to a captivated audience in Jamrich room 1100 Tuesday evening, in a presentation hosted by the NMU Diversity Common Reader program. Urrea is the author of this year's selection, a memoir entitled "Nobody's Son: Notes from an American Life." Photo by: Noah Hausmann

American society can be tense, splintered, with thoughts of “us” against “them.” But voices ought to celebrate diversity and heritage, recognizing the human experience that all people share, while showing compassion to everyone, author Luis Alberto Urrea told the audience.

A man of many voices, languages and perspectives, Urrea spoke in Jamrich 1100 Tuesday evening to an audience of NMU and Marquette community members, as the author of 2018’s NMU Diversity Common Reader book.

“Nobody’s Son: Notes from an American Life,” which is also a winner of the American Book Award, is a memoir of Urrea’s childhood, growing up with the struggles of culture, identity and discrimination, examined through his own multilingual and hopeful lens.

This is the sixth year of NMU’s Diversity Common Reader program, which selects literary works from multiple cultural perspectives and provides free copies to the campus community.
“Urrea’s literature of witness is clear-eyed and honest…” Amy Hamilton, an associate professor of English, said to introduce Urrea. “He holds himself and his readers still, shows us what we need to see, even if we don’t want to see it. But there’s also a deep sense of care and empathy in the way Urrea lays bare hard truths.”

As the author of 17 books, Urrea has won awards for poetry, fiction and essays, and is most recognized as a U.S.-Mexican border writer. He is a 2005 Pulitzer Prize finalist for nonfiction and a member of the Latino Literature Hall of Fame. He is currently a professor of creative writing at the University of Illinois-Chicago.

The author began his talk by regaling to the audience the stories of his childhood, both the wonderful memories and the tough moments. He was born in Tijuana, Mexico, and grew up happily on a dirt street, Urrea said. Then his family moved because of a tuberculosis outbreak when he was still young to an impoverished part of San Diego.

Urrea even experienced a clash of cultures within his own household, as his Mexican father and American mother feuded, both of them trying to influence him toward belonging to one culture or the other.

“My parents had stopped loving each other,” he said. “It broke into a civil war. I like to tell people the kitchen was the United States, and the living room was Mexico. In the kitchen, [where mom was] I was ‘Louis’… In my dad’s mind, I was ‘Luis.’ My mother spoke English. My father spoke Spanish, and both of them were so involved in their chess game with each other, that also they were trying to win me over to their side. I was expected to speak perfect English; I was expected to speak perfect Spanish.”

Later, the family moved into a safer San Diego suburb, “which was the first time I saw lawns,” Urrea said. But even there, kids called him racial slurs like “greaser” and “wetback.” Nevertheless, Urrea would be the first in his family to graduate college.

On the way to give graduation money to his son, Urrea’s father was robbed and killed by corrupt police south of the border, he said. A medic eventually got the money to Urrea, he said, but the police then demanded Urrea pay bail to get back his father’s body.

“So I gave my graduation money to them to buy my father’s corpse,” Urrea said.

Becoming a writer helped Urrea cope, and he was first published with help from sci-fi author Ursula K. Le Guin, who became a kind of mentor and friend to him, he said. But still it was a struggle to pay the bills, and Urrea’s mom, too, encouraged her son to be an author.

“She was completely broke. But at Christmas time, she would give me postage stamps as my present, hoping I would submit one more story or poem to some magazine,” he said.

“I learned then that I was American,” he said. “I wasn’t a ‘border rat.’ I was a USA American. The whole country was my country.”

During a question and answer time at the end of the presentation, Urrea described some of his goals in documenting these hard stories and issues and daring to write them with a degree of humor. It’s about creating moments when “one can laugh with somebody that one doesn’t see eye-to-eye with, except that we’re both human.”

He added, “I think we splinter as people, and these are things that remind us that the ‘other’ is really just like us. There is no ‘them.’ There is only ‘us.’ I think that’s a good thing to remember. If I can represent people I love to other people, I feel I’ve done my job.”