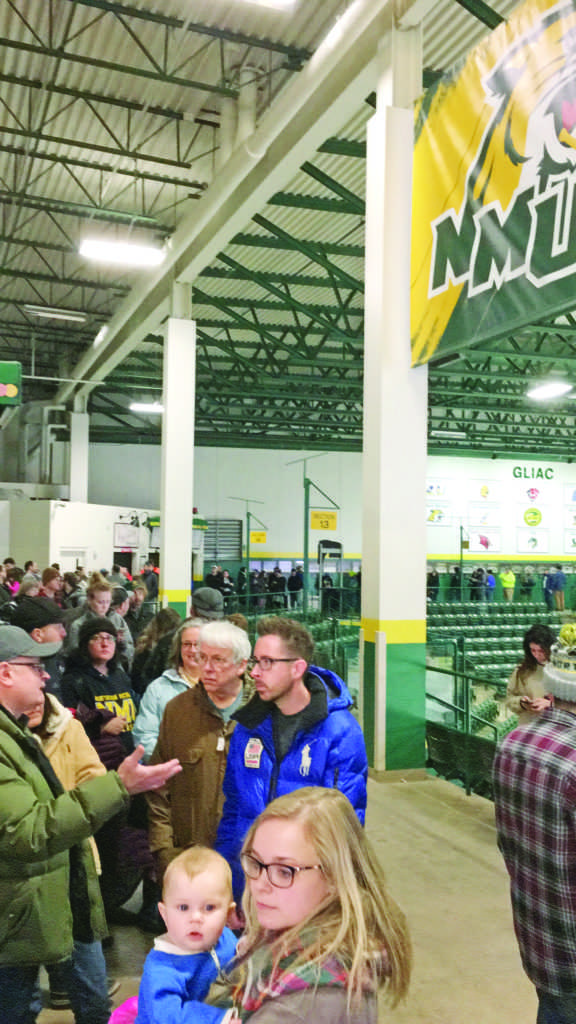 Community members stand in line on Monday, waiting to purchase tickets for the Hockey Association championship game between NMU and MTU that will take place Saturday. Tickets sold out in four hours. Photo by: Lindsey Eaton

After receiving complaints that tickets for Saturday’s Western Collegiate Hockey Association championship game between NMU and Michigan Technological University (MTU) were being scalped, public safety is investigating the issue and warns students to be wary of ticket scams.

The 4,300 seats available for Saturday’s game at the Berry Events Center sold out in four hours, leaving many NMU and MTU hockey fans still wanting tickets.

Laplante said most posts have been taken down or altered so that they are within the law but he had one thing to remind Maquette residents who have tickets for Saturday’s game.
“Scalping is illegal. It’s a 90-day and a $100 fine misdemeanor,” Laplante said. “If you’re caught, you will be prosecuted.”

In addition to the consequences of selling tickets for an elevated price, Laplante also said events such as this can bring about falsified tickets, which students should also be mindful of.

“Be aware of it. Make sure the ticket is authentic,” Laplante said. “You can do that by simply looking at the actual ticket itself. Does it look legit? Does it feel legit? Call the ticket office and see if they can verify that the ticket exists.”

Laplante added that while they’ve received no reports of fake tickets, event goers should still be aware and vigilant.

“We’re looking for everyone to have a fun night. We want them to have a safe night and we want them to enjoy the experience,” Laplante said. “I’ve been here for these exciting games and they are very well worth it.”