Domination in the pool 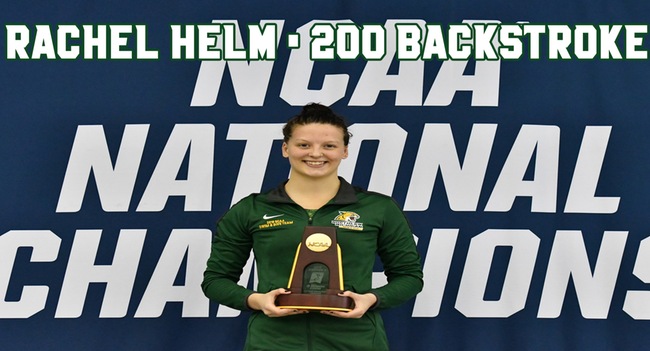 Sophomore Rachel Helm is a National Champion, again. Competing at the 2018 NCAA Championships for Swimming and Diving in Greensboro, N.C., Helm swam away from the competition in the 200-yard backstroke. Helm finished with a time of 1:57.20, winning the race by over a second in front of the second-place finisher.

Last year as a freshman, Helm was top dog in last year’s 100-yard backstroke event, and she is overjoyed to finish first once again.

Helm also claimed fourth place in the women’s 100-yard backstroke, earning her All-American recognition in a time of 54.34 seconds. Junior Regan Kilburn earned her first individual Honorary All-American honor this year by placing 12th with a time of 56.19.

“It was an unbelievable feeling to be back on top,” said Helm. “I couldn’t have done it without my teammates and coaches.”

The Wildcats also earned another All-American and Honorary All-American honors.
Junior Renars Bundzis took second in the men’s 200 back, finishing in 1:44.01 to earn All-American recognition.

Freshman Gabriella Spajic earned her first individual Honorary All-American honor with a 15th place in the women’s 1,650-yard freestyle, clocking in at 17:04.30.

In the 100-yard freestyle, sophomore Lajos Budai took 19th in the men’s race with a time of 44.50. Freshman Lena Soulas finished 27th.

Overall, the women’s team finished the four-day meet with 77 points to end the year 16th in the country. The men’s team scored 100 points in the meet, finishing the season 18th nationally. Together they posted one national champion, 17 All-Americans, 12 Honorary All-Americans and two school records.