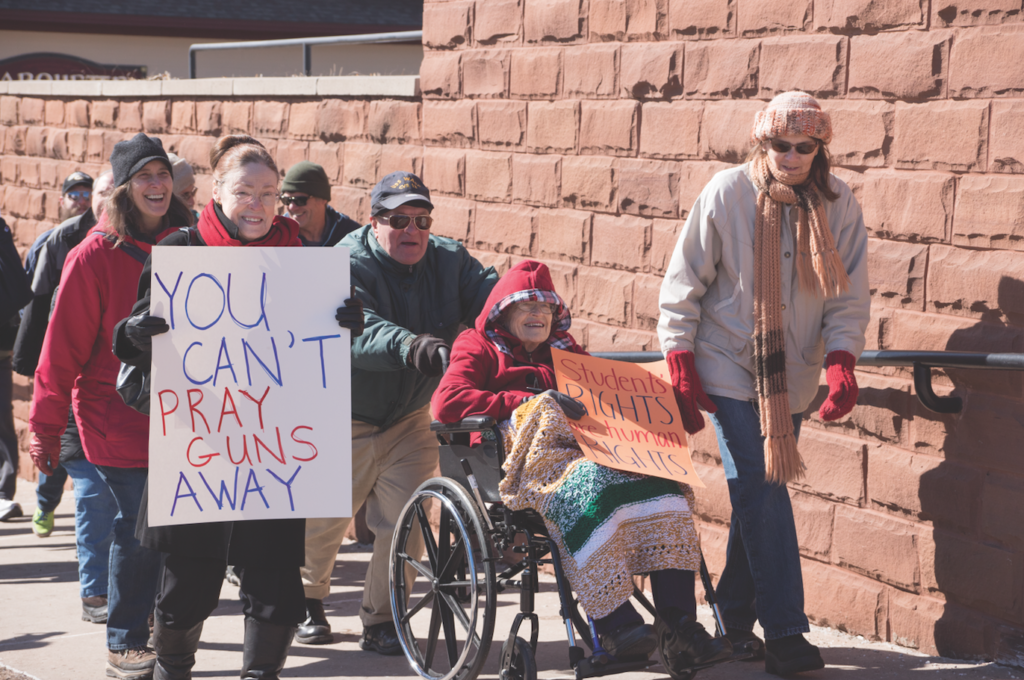 Hundreds of students and community members gather in Marquette where the students lead the Marquette March for Our Lives, marching in solidarity with movements taking place nationwide. Photo by: Kat Torreano

Shouts of “What do we want? School safety. When do we want it? Now,” echoed across Washington Street as K-12 students led the charge during the Marquette March for Our Lives.

Hundreds of K-12 students, college students and community members of all ages gathered downtown Saturday at the Marquette Commons to march in solidarity with movements taking place nationwide calling for action against gun violence in schools. The march was organized by local high school students and featured the option for those eligible to vote but not registered to come with a picture I.D. to register to vote at the march.

High school students Clara Thompson and Clara Smith were the main student organizers of the event.

“Thank you all for coming and supporting us,” Smith said to the crowd gathered before the march. “To all the students, teachers, parents and community members, we thank you for letting our voices be heard and stepping back to hear what we have to say.”

Marchers walked in compliance with trafc laws, with the help of trafc assistants working at each intersection. One of the trafc assistants was graphic design professor and Marquette community member Jane Milkie.

“I’m here as a citizen to help support all of those who have lost their lives to gun violence in America and elsewhere,” Milkie said. “I also am interested in hopefully affecting change through the vote, encouraging people to exercise their democracy and being present in support of youth. I’m a grand-parent, as well as a mother, and I certainly am hoping for some change.”

Sophmore social work and Spanish major Brooke Tharp said she was excited to see how many people came to the event to support students.

Marchers regrouped in the Marquette Commons after walking two full laps around Washington Street. Once all of the marchers were back, student speakers voiced their thoughts and feelings on gun violence in schools.

“History is constantly being made, considering the fact that the present does not actually exist,” Grugin said.

“When something happens, it is in the past.”

Grugin said now is the time for young people to make history.

“Don’t you think we should do something to be praised, instead of looked down upon for holding back our thoughts, actions, opinions and beliefs? I do,” she said.

“Change that combats gun violence in schools is only possible if large groups of people stand together”, Grugin said. “Time is all that we have. We have to use it for the better.”