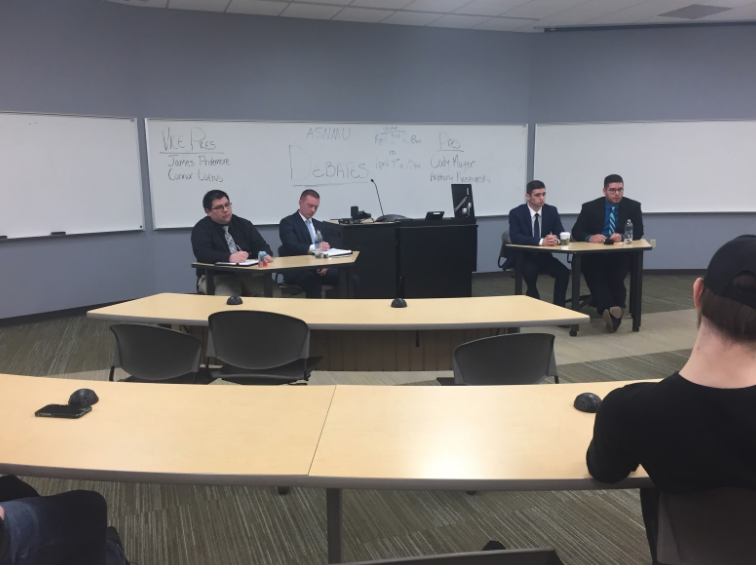 The candidates running for ASNMU president and vice president debated things they wish to improve at NMU with an underlying theme of increasing student engagement, which starts with student voter turnout.

According to this year’s candidates, voter turnout for ASNMU elections has been lacking, as only 10 percent of the student body voted in 2017. The candidates hope to increase these numbers.

“[We] need to make sure that the students actually know that they have ASNMU representatives,” Pridemore said. “The board of trustees does not have to listen to us if we don’t have a strong voice from the students, We have to increase that.”

The moderators, ASNMU President Tristan Ruiz, a junior biochemistry major, and Heather Montgomery, a senior social work major, facilitated the questions formed by the elections committee. Candidates were allowed a three-minute response to each question, the first being, “Why do you think you’re the best candidate?,” and progressed to questions about candidates’ challenges and leadership styles.

He recognizes that many students are not aware of ASNMU and the things that it does for the student body, and wants to increase student engagement.

Responding to questions from the audience, Mayer explained how he hopes to increase engagement on campus.

“We are trying more get more outreach and build relationships with media on campus,” Mayer said.

He said he hopes to reach more students and keep them informed and involved by sending out an email once a month describing the things the organization has accomplished.

Loftus, the current vice president of ASNMU rerunning for his position, noted the legitimacy of the organization, citing that in 2017, ASNMU was nominated by the Center for Student Enrichment for organization of the year and the NMU Food Pantry was spearheaded by him.

“We are going to continue to build the organization rather than tearing it down and building it back from the ground up again,” Loftus said.

Students can vote for candidates April 2 to 4 after receiving an email with the link from current President Ruiz.