‘Swing and sway the Anishinaabe way.’ 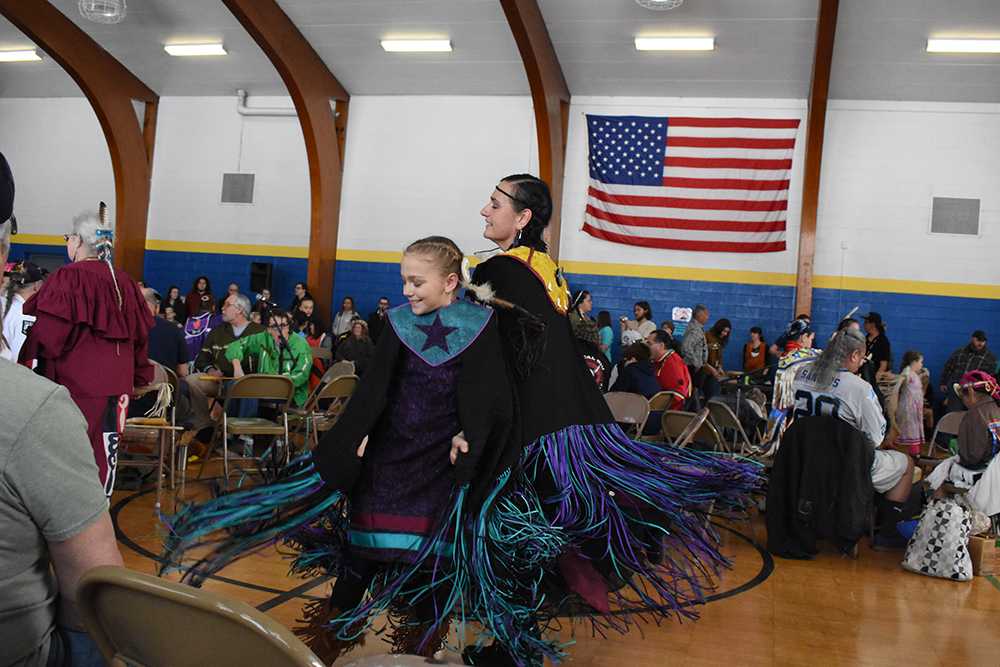 For the pow wow, Alec Lindenberger donned a beaded necklace and a warm-toned, floor-length “jingle dress” adorned with flat, cone-shaped tin bells. As she danced, the skirt emulated a rushing waterfall in the springtime.

The woman also carried a two-foot long, 102-year-old golden eagle wing fan that is said to wave away sickness. Not long ago, a friend of Lindenberger’s was facing amputation of his leg. He asked her to dance for him while at another pow wow in Peshawbestown, Michigan, in hopes that her jingle dress dance would alleviate
his ill fate.

The bells represent people who suffer from illness, injury or feel down spirited, said Lindenberger, a Lakota member who lives in Marquette.

“The jingle answers all went out to him, and a few days after he miraculously discovered he didn’t need the surgery,” Lindenberger said.

Lindenberger was one of dozens of dancers at the 25th annual “Learning to Walk Together” Pow Wow, hosted by NMU’s Native American Student Association at the Marquette Armory on Saturday, March 24. This year marked the first time this cultural event was held there instead of at the Jacobetti Complex.

“We’re here to visit, see old friends and make new friends. We want the community to see that a pow wow is a celebration of all walks of life, and a time to feast with family and friends,” said Kristina Misegan, president of NASA and senior Native American studies major.

The pow wow commenced with the Grand Entry at noon, followed by the honor songs, which paid respect to military veterans and prisoners of war. John Vincent-Garcel, a Coast Guard veteran and Anishinaabe member, said it’s an honor to march for the veterans and his country.

“The event is also about a respect for elders that we seem to be lacking in other cultures,” Vincent-Garcel said.

Not all pow wows are held to the same level of strict tradition. However, certain etiquette must be taken. During the honor songs, the master of ceremonies asked that no pictures be taken and the audience stand in silence with hats removed.

A gradual rumble of drumming filtered through the open armory doors. Male singers from the Four Thunders, Sturgeon Bay, Young Kingbird and Morning Thunder drum groups were invited to perform. Following tradition, women sang along with the male drummers, but stood just outside of the drum circle.

A ring of cedar branches strewn on the armory floor acted as a barrier said to ward off evil spirits.

“I remember being scolded at a pow wow as a youngster because I crossed the cedar ring,” recollected Jeremy Martin, a senior Native American studies major. “It keeps good spirits in the circle, and lets evil spirits through when broken.”

“Learning to Walk Together” is a traditional pow wow, as it is always open to the public.

Dancers enter from the east, as this direction is where the sun rises and where life begins, Martin said. Dancing in a line, they slowly coil around the drum circle, heel to flat foot, heel to flat foot, “elder style.” The movement is slow so that the elders can keep up.

There are two types of dances: social and traditional. Among the social are the intertribal, round, social and two-step dances. The master of ceremonies relays instructions on which direction to follow, who can join, and to “swing and sway the Anishinaabe way.”

Along with the veterans honor song, the “sneak up” is considered a traditional dance. Male and female dancers mimic hunting animals, their feathers and intricate beadwork moving with their stealthy motions.

There were about six to eight languages spoken at the event, including Anishinaabe, Menominee and Cree, said Jud Sojourn, NASA adviser and assistant professor of Native American studies.

People interested in Native culture can volunteer at the event, take classes, and get involved with NASA, Sojourn added.

Martin explained that since Native American cultures are so linguistically diverse, almost all tribal songs use the same four sounds: o, a, ah and oh. These syllables are synonymous across all nations, and they transcend the language barriers, he said.

A member from the Keweenaw Bay Indian Community and a crew of helpful volunteers prepared the feast for the anticipated 500 attendees.

Attendees walked to the heated tent outside of the armory for the feast at 4 p.m. Mashed potatoes and gravy, cranberry gelatin and especially frybread were among the favorites of the meal, Martin said.

“We have an amazing support system in NASA that are willing to buckle down because of how much work it really is,” Misegan said. “The Center for Native American Studies helps us tremendously.”

“Learning to Walk Together” brought all nations to the armory. Toddlers, elders, NMU students and all participants danced in harmony with the striking drum beat.
“It puts you in a good state of mind, if you’re having troubles it relaxes and centers you,” Misegan said.