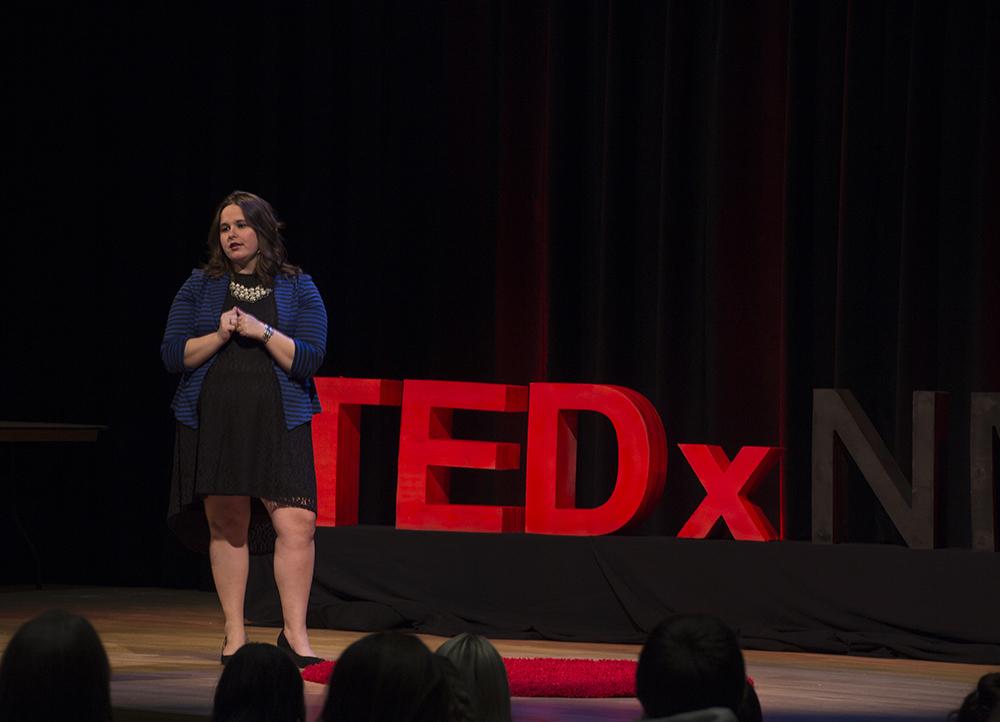 Presenter Emily Stulz, an assistant director of social media communications at Central Michigan University and an NMU graduate, talked about how people present themselves on social media in the post-college stage of "adulting" versus reality, during the TEDxTalk even in Jamrich Hall on Saturday, March 24. Photo courtesy of J.L. Wells

“Ideas worth spreading” is the slogan for TED, a popular media nonprofit devoted to sharing ideas, usually in the form of short talks presented by diverse people from across the world.

The five members of NMU’s TEDx Talks Club hosted a TEDx event Saturday in Jamrich room 1100, featuring eight presenters from the region who spoke on a wide range of topics.

TEDx is a form of TED that allows self-organized event planners to bring local speakers to an independent TED event that is given general guidance from the TED conference. This was the first time a TEDx event has been held on NMU’s campus.
The first TEDx speaker was environmental historian Nancy Langston. Langston talked about the need to discuss the conservation of Lake Superior, the largest freshwater lake in the world.

“Right now we are facing one of the biggest challenges of our lifetime, and that’s the challenge of climate change,” Langston said. “Climate change is actually causing our lake, right here, to warm faster than possibly any other large body of water on Earth.”

Langston talked about environmental health in the wake of industrial changes and how that could affect Lake Superior.

“We face the risk of a migrating climate if we don’t control our emissions,” she said. “What that means is that, by the end of the century, we could basically become Oklahoma by August. And I’m sure Oklahoma is a wonderful place, but I want to live in the Northwoods, not Oklahoma.”

Lang is the author of four books, her most recent titled “Sustaining Lake Superior: An Extraordinary Lake in a Changing World.”

NMU alumna Kaylee Laakso shared her insights on the phenomenon of fake news, suggesting ways to make more informed choices when selecting news sources.
“I want to see people with different backgrounds, viewpoints and beliefs on subjects come together to establish the truth because only through the exchange of ideas—large, small, conflicting, complementary and everything in between—will we grow our understanding and knowledge,” Laakso said.

Junior English writing major Abigail Zeman spoke on removing “to be” from the English language, in order to be more honest and simple when speaking. This version, also known as English Prime, is similar to George Orwell’s “Newspeak” in his novel, “1984.”

“Saying ‘I am a failure’ sounds permanent and all encompassing, as if it’s part of someone’s personality characteristic,” Zeman said. “‘To be’ statements trigger emotional and mental turmoil, while the English Prime alternatives such as ‘I feel like a failure’ or ‘I failed my exam’ are temporary and adjustable.”

Assistant Director of Social Media and Communications at Central Michigan University, Emily Stulz, an NMU alumna, talked about how people represent themselves on social media in the post-college stage of “adulting” versus reality.

Jes Thompson, an NMU associate professor of communication and performance studies, discussed how to change the conversation surrounding climate change.

“We can change the way we talk about climate change. It doesn’t have to be buried in doom and gloom messages or scientific jargon,” Thompson said.

Thompson added that it is important to empower an audience when speaking about climate change.

“Research shows that Americans feel that this is bigger than them, that they are helpless. Don’t let them be helpless,” Thompson said. “There are hundreds of decisions that we make on a daily basis, things we can do from planting a veggie garden to building a solar garden.”

Liz Peppin is a physician assistant practicing outpatient internal medicine and pediatrics in Marquette. She talked about how the body responds to pain signals and how understanding it can lead to more effective treatment of chronic pain.

“Pain is a normal human experience, but living in pain is not,” she said.

“The good news is that if you are living in painland, like I was, it’s possible to chart your own way out of it with dedication, hard work and some coaching along the way,” Peppin said.

English professor at Grand Valley State University Kathryn Remlinger teaches a range of socio-cultural linguistics courses. She spoke on the Yooper dialect and what she’s learned about it after years of study.

Changes in dialect can be linked back to how languages have mixed over time, she said. The majority of people who settled in the North Western Upper Peninsula spoke Finnish, a language that doesn’t have prepositions or articles. When Finnish and English came into contact, those rules for Finnish transferred on into English.

“People still understand what you mean if you say ‘I go Shopko’ or ‘I went post office.’ We don’t really need those prepositions and articles,” Remlinger said. “There’s nothing wrong about it, it’s just different. It’s not ungrammatical. It’s not bad English.”

Graduate biology student Ryan Brandt is a neuroscientist who studies the pathology associated with neurodegenerative diseases. He spoke on neuroplasticity and expanding and exercising the brain.

“Your brain is an amazing organ,” Brandt said. “It’s home to one of the most fascinating type of cells: neurons.”

While NMU’s licensing agreement limited the number of tickets available for the event in the Jamrich Hall auditorium, students and community members were able to view a livestream of the event or get tickets for an overflow viewing elsewhere in Jamrich.

According to NMU TEDx Club member Hosanna Olah, the TEDx talks will be released on Youtube but the date is still to be determined due to having to send the videos to TED for approval.