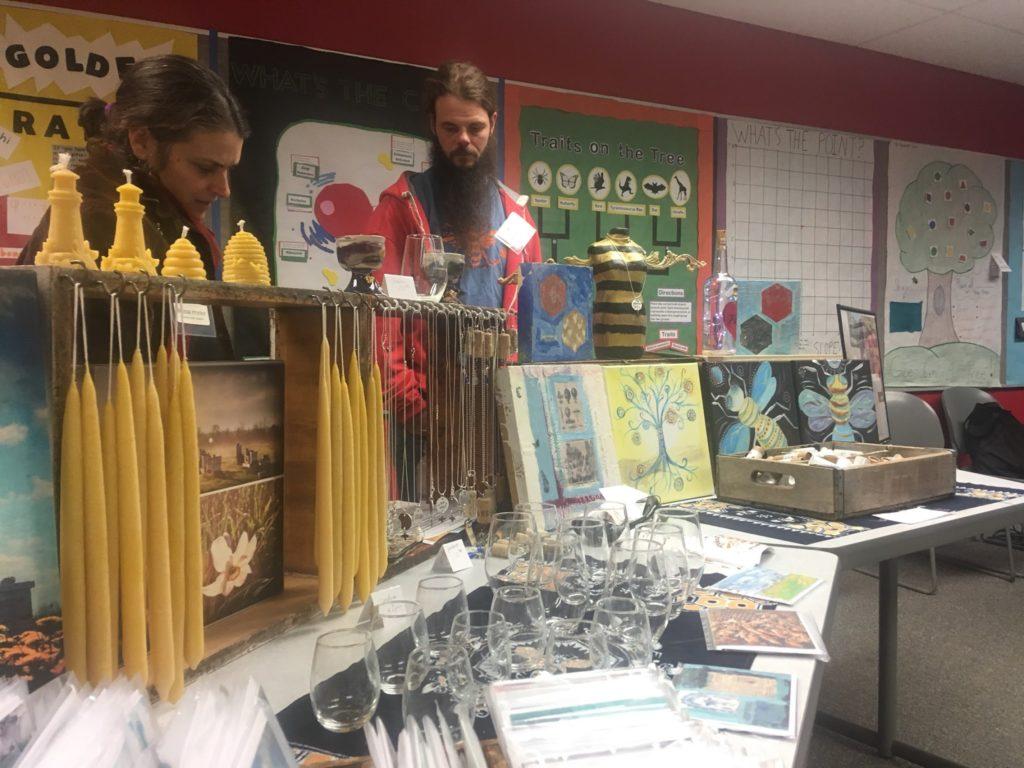 Vendors Melissa Hronkin and John Hersman of Mass City, Michigan market their mead and other craft merchandise at the Upper Peninsula Beekeeping Conference on Saturday at the Seaborg Center.

It’s a 21-day journey for a honey bee to grow from an egg to an adult worker. It’s an intensive process during which the young bee is cared for by fellow workers. After it’s fully nurtured, the bee flies for the first time, an “orientation flight.” It hovers there, about 4 inches from the hive and looks back, imprinting in its memory the characteristic colors of its home, so it can forage for pollen and successfully return to produce honey for the colony.

The crowded auditorium listened closely to the keynote address of Charlotte Hubbard, an author and avid beekeeper, at the inaugural Upper Peninsula Beekeeping Conference.

Just like those bees, the attendees of the conference would likewise be oriented to the nuances, sweet successes and potential pitfalls of the hobby, she said.

The Seaborg Center in NMU’s West Science building buzzed with excitement from 8 a.m. to 5 p.m. on Saturday, March 31. The conference was maxed to capacity with 170 attendees. Hosted by the Superior Beekeeping Club, the event featured workshops for beekeeping enthusiasts to improve their bee care abilities and know-how, as well as vendors selling goods.

Each attendee paid $36. Tickets sold out two weeks before the event, officials said. Attendees were of every age, from gray-haired to grandchildren. They hailed from bee clubs from across the U.P., downstate Michigan, Wisconsin and farther. This large turn-out was a welcome surprise for event organizers.

“If we had 100 people, it’d go beyond our dreams,” said Terry Toland, a past Michigan Beekeepers Association president, who spoke before the keynote address.

Workshop topics included choosing starting equipment, marketing honey, understanding swarm biology and keeping bees despite the challenging environment of the U.P. Attendees learned to recognize dangers that could cause the loss of an entire bee colony, like mites, diseases and winter’s cold.

“Folks, it happens, and it’ll break your heart,” Hubbard added.

One team of vendors, Melissa Hronkin and her husband John Hersman, traveled two hours through the weekend snowstorm from Mass City, Michigan to campus. They had beeswax taper candles and paintings for sale, and they specialize in making all-natural, small-batch mead, using honey sourced from their own hives and other local beekeepers. The couple has been keeping bees since 2008 and selling mead since 2012. Hersman also led a workshop on mead making in the afternoon.

Hronkin described what it’s like to be a beekeeper in the U.P., with its joys and challenges.
“It’s the fascination, art and science of it, collaborating with nature,” Hronkin said. “There’s still magic and mystery in it, successes and failures. It keeps you humble.”