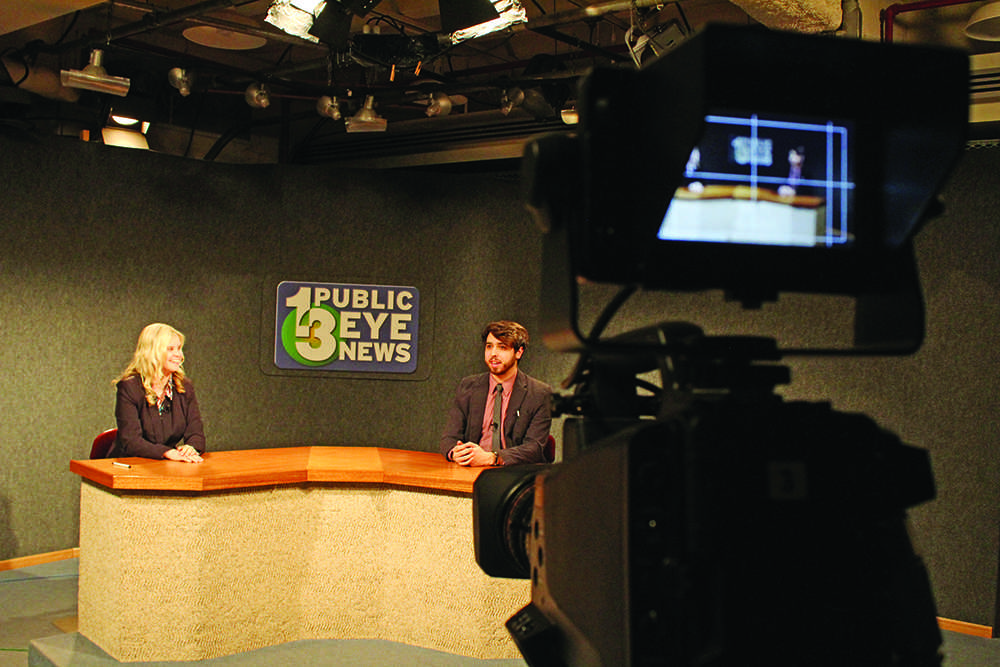 Beneath the heat of studio lights, dressed in formal clothes, they smile and do their best not to stumble reading the teleprompter. The student anchors sit behind the news desk and deliver the daily headlines live over the airwaves of public television.

Public Eye News (PEN) is a 15-minute live, TV news broadcast that is completely run by NMU students and open to all majors who want to get involved. The program, which started in 1975, airs weekdays at 4 p.m. on WNMU-TV Channel 13.1 from September to May.

Students are responsible for all aspects of the newscast: anchoring on-air, writing stories, operating cameras, directing the show and producing local news packages. This gives them valuable, real-world experience in the TV news industry.

“In this field, especially, [employers] are looking for experience,” said Bob Thomson, PEN adviser, director and producer of WNMU-TV. “Sure, they’re looking for a degree and a well-rounded personality, but at the top of the list, they’re looking for what this person has done in the field. To be able to say, ‘I’ve been working for a PBS affiliate, U.P.-wide,’ it’s the real deal, and it makes a difference.”

Usually about six to eight students work as cast and crew for a PEN news day, helping on afternoons when they’re available. There are two paid student positions as producer-directors, who choose what news stories to run each day and are responsible for supervising all aspects of the broadcast. The rest of the cast and crew are student volunteers.

In the PEN office and studio in the basement of the Learning Resources Center, the anchors arrive at 1 p.m. to edit and prepare their stories for on-air that day, then the rest of the technical and camera crew are on hand for practice shows starting at about 3 p.m. At 4 p.m., it’s for real: a live show that’s broadcast on public TV across the Upper Peninsula.

Jillian Wurmlinger, a freshman multimedia production major, was one of the news anchors on Monday’s show. Like most students at PEN, she has worked many of the different crew positions, from camera to graphics, to communicating cues from the producer in the control room to the cast on-air. But she described anchoring as both her biggest challenge and most rewarding experience.

The first time she anchored, she was “terrified,” Wurmlinger said, afraid to mess up reading her script. But after the show, she felt relief and a wave of confidence.

“I was like, ‘OK, this isn’t so bad.’ It was comforting to know that I could actually do something that I thought I was incapable of,” Wurmlinger said.

The PEN crew is some days understaffed. Halfway through the show on Monday, when the recording turned to the weatherman and green screen, Wurmlinger took a turn operating a camera, so the sports anchor, who’d also doubled as cameraman, could take a seat at the news desk and deliver his sports highlights.

“It is like a circus, but we’re all flexible, so it works out,” said PEN producer Samantha Carter, a senior media production major.

Carter has been involved in PEN since her freshman year, and she said she enjoys passing on her broadcast skills to a new generation of students joining their “PEN fam,” as she affectionately called the group.

“It’s really fun, especially since I remember being in [a newcomer’s] position… learning about PEN and learning different jobs. Being able to teach other people the things I’ve learned is exciting,” she added with a smile.