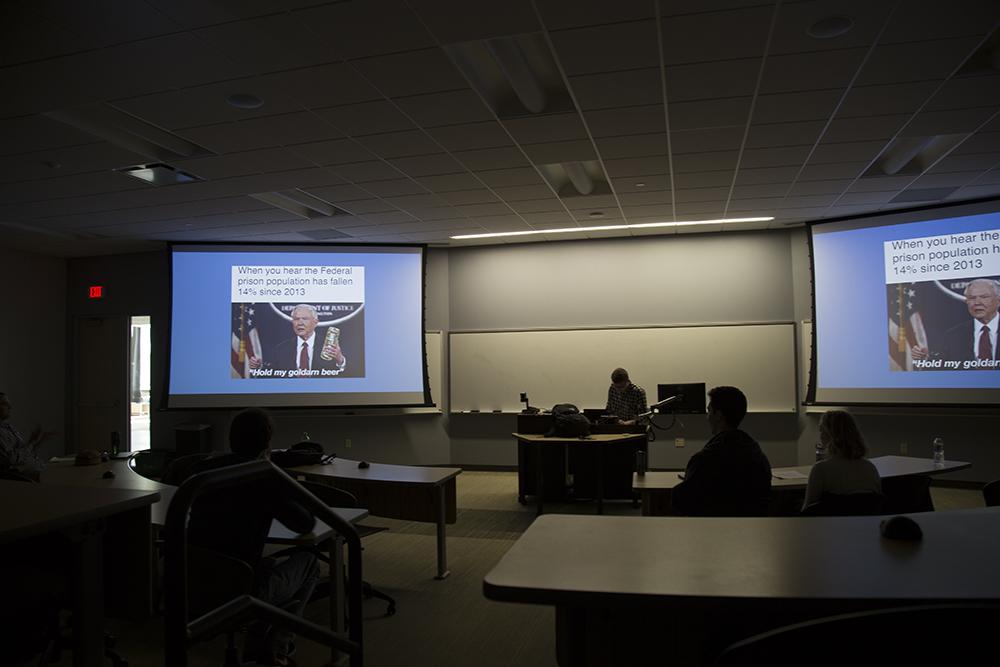 Students listen to political science professor Hanna Kassab as he explains his observations regarding memes in politcal culture. Photo by: Neil Flavin

When it comes to politics, it’s important people hear both sides of an argument. Without acquiring knowledge from both sides, people will not be able to form their own opinions. At least that’s what a presenter said at NMU’s first “meme-ference.”

In the “Politics and Memes: Ideas, Symbols and Trivializing Reality” discussion held last Tuesday, a group of students and NMU political science professor Hanna Kassab gathered in Jamrich to discuss political symbolism of memes and the role they play on social media and in constructing personal beliefs.

The discussion consisted of three students, along with Kassab, presenting their arguments regarding online culture, social media’s influence on the 2016 election and the idea of symbolic interaction. With PowerPoint presentations, the group examined how memes like “Pepe the Frog” and “Soy Boy” became characterized with a particular identity such as masculinity and weakness.

“When you don’t have a very good grasp on what you think and believe, you’re just regurgitating the same thing over and over again,” senior criminal justice major Thomas Sheill said during his presentation. “You’re not exposed to the other side in a realistic way that encourages and fosters healthy debate.”

When people are too consumed with social media, there’s an “echo chamber” effect at play that deprives people from having an open mind, Sheill added.

“Your opinion might not be completely bulletproof, [but] you should learn to listen to different opinions,” Sheill said.

With memes being a controversial topic in the 2016 presidential election, there are questions of whether the United States needs to punish Russian or let the “covert espionage” go, and it’s important to examine this issue up close, senior political science major Max Lund said during his presentation. This type of interference in the United States is the first of its kind and it’s vital to know what to do about it, Lund said.

“The horse is out of the barn now,” Lund said. “But it still doesn’t take away from the fact that Russia did try to interfere with our elections.”
The creator of the event, Kassab, discussed how memes develop a “lexicon” meaning how opinions take shape, how memes reinforce those ideas and the speed in which they travel online. Memes should be enjoyed and the meanings associated with them are only what people give them, Kassab said.

“At the end of the day, you have to take everything: Facebook, Twitter, The New York Times and CNN with a grain of salt,” Kassab said. “Do your own research and think for yourself. God gave you a brain and it’s up to you to use it.”