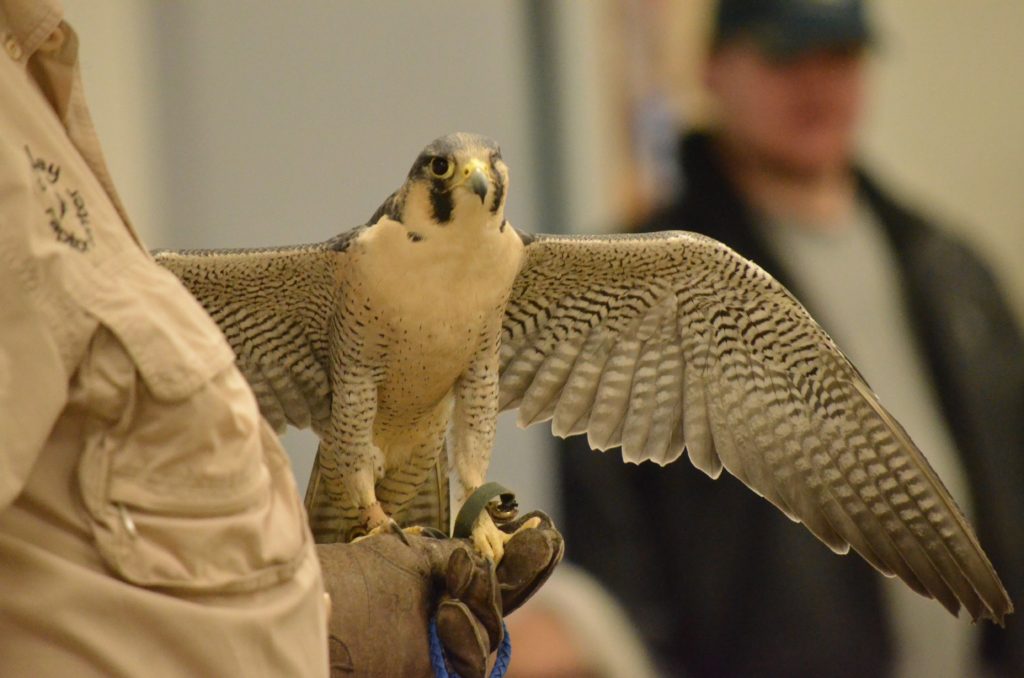 Phoenix the peregrine falcon spreads its wings before the audience at the “Birds of Prey” event, hosted by the NMU Fisheries and Wildlife Association at 2 p.m. on Friday, April 6 in Jamrich. Photo by Emma Case

Live birds are featured in presentation about animal rescue, rehab and conservation

The female American kestrel, despite only weighing 3.5 ounces, can eat three mice a day—almost half its own body weight. The fastest animal ever recorded was a peregrine falcon diving at 242 mph. The cry of the red-tailed hawk is so iconic that it is often used to represent other large birds in movie sound effects.

These three fantastic animals were the features of the “Birds of Prey” event, a presentation on rescue and rehabilitation efforts for raptors, or as they are more commonly known, birds of prey. The event was from 2 to 5 p.m. Friday, April 6 in Jamrich room 1320, hosted by the NMU Fisheries and Wildlife Association. Presenters from the Chocolay Raptor Center in Marquette and from Northwoods Wildlife Center in Minocqua, Wisconsin brought live animals and lively advice on what can be done to ensure the survival of endangered species like raptors.

From Chocolay Raptor Center, Co-founder Bob Jensen talked about their mission of education.

“If we can get young people to fall in love with raptors like we have, that’s a whole army of people to rescue birds,” Jensen said.

The main draw of the event was the live birds. They brought in enough people to fill the seats, line the room and still have over a dozen people sitting on the ground. Rey, the American kestrel sat perched on the podium at the front of the room like a tiny professor as a presenter talked.

Later in the presentation, Jensen carried Rey around the room for everyone, including the dozen young children, to see closely. Afterward, Phoenix, the peregrine falcon and Erik, the red-tailed hawk, were brought out to audible awe from the crowd.

Whenever a presenter asked a question, an eager 12-year- old girl, Erin Sarjeant, sitting near the middle of the room answered, always correctly.

“Do you know what this one is?” Jensen asked as he brought out the peregrine falcon.

“The fastest animal in the world,” Sarjeant answered with her hand shooting into the air.

After the presentation was over, Sarjeant said that she “loved the peregrine falcon,” and has “a ton of bird books.”

Another presenter, Bart Kotarba, education director at Northwoods, talked about what people without training can do to help animals. For anyone who sees a bird fly into a window, Kotarba said to prepare a shoebox with holes poked and lined with paper towels to house the bird for about 30 minutes. Afterward, open the box outside. The bird may have died, but if it hasn’t, it should fly away, he said birdfeeders should be placed either within three feet of a window or more than 30 feet away, Kotarba said.

“If they’re in between, the birds can get a running start off it and hurt itself on a window,” he said.

For baby animals found out of their nest, Kotarba had advice for children. Kotarba said for children to have an adult locate the nest and carefully move the animal back to its home.

“You ever heard that if you touch an animal, its parents will abandon it?” Kotarba asked the room. “It’s a lie. They’re more concerned with raising their young.”

For those who wish to get more involved in raptor recovery efforts, the Chocolay Raptor Center is a local nonprofit rehab facility for sick and injured birds of prey. The organization nurses and cares for birds until they are fit to return to the wild, and during their stay the birds are used to educate the public. The center can be reached at (906) 249-3598.

The Wisconsin-based non- profit Northwoods Wildlife Center brings in most any animal in need, admitting 600 to 700 sick or injured creatures annually, according to their website. Northwoods can be reached at (715) 356-7400.