Benri Sushi is ‘the place to go’ for quality 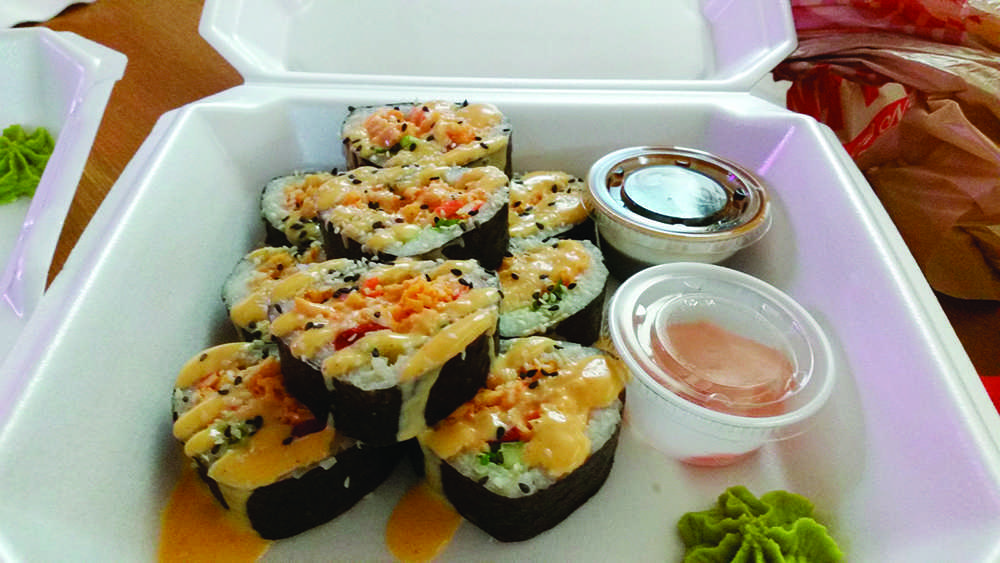 Up in the U.P. we seem to have a thing for fish. Many restaurants serve fried fish on Fridays, but not so many offer sushi. Marquette is next to the biggest freshwater lake in the world, so Benri Sushi opening their doors and shoring up sushi lovers is appreciated.

Maybe saying “opened their doors” is a bit of a stretch. Benri Sushi, in the lower level of the Masonic Building on West Washington Street, is a booth, a little kitchen and two hard workers. Benri Sushi opened in Marquette on Jan. 9 this year after closing down a location in Escanaba.

Dining options are take-out only and there are no drinks on the menu. For the impatient, there is a table nearby with a couple of chairs, but otherwise seating is nonexistent. Orders take 20 to 30 minutes to complete, so calling ahead is recommended, especially because once they run out of stock for the day, Benri Sushi closes up. Their hours are short, only 11:30 a.m. to 3 p.m. Tuesday through Friday and noon to 4 p.m. on Saturdays.
All these inconveniences would be a deal-breaker if the food wasn’t so good.

When I went, a friend and I ordered spicy crab rolls and grasshopper rolls, both large.

The grasshopper rolls were made with smoked whitefish, avocado and cucumber with plenty of sauces drizzled on top. As for the spicy crab, it included imitation crab in a garlic mayo and sriracha sauce paired with red pepper, cucumber and scallions with a “Japanese yum-yum sauce” put liberally on top.

Large rolls are what are called futomaki and small orders are maki rolls. Both are the type with the main ingredients in the middle of vinegar rice and are wrapped in seaweed, but the futomaki rolls are wide and flat while maki are thin and tall. Just recently, Benri added nigiri, which is a piece of fish on a ball of rice and sashimi, which is a high-quality cut of raw fish by itself, to their appetizers.

Biting into a good maki roll gives the tongue a powerful
flavor profile and Benri does not disappoint. First, there is the saltiness of the seaweed, followed by a mild sweetness of the rice, then there’s whatever makes up the meat of the roll. For me, it was a savory and slightly sweet crab blend accentuated by creamy avocado and a sharp crunch from the cucumber. For the grasshopper roll, the same is all true, but with smoky whitefish and its strong charred taste.

Some people might feel uncomfortable about the prospect of eating raw fish, but only a few items on Benri’s Sushi menu are actually raw, the Maguro roll, the nigiri and the sashimi.

Inevitably, talking about sushi in Marquette leads to comparison with Temaki World Kitchen. Without going into detail, Temaki isn’t as good, but is cheaper, has all the trappings of a proper restaurant and can be paid for with NMU meal plans.

One notable thing is the difference in quality of the smoked fish. I had smoked trout once at Temaki and it tasted burnt, not charred and completely overpowered all the other flavors. The smoked whitefish at Benri instead creates a contrasting flavor profile with the other ingredients which serves to make them stand out against each other.

Quality doesn’t come cheap, and the order came to $28 for lunch for two. Small orders are $9 to $13 and large orders are $13 to $16. But if you’re looking for good sushi, Benri is the place to go in Marquette. I plan on going again and again, working my way down the menu.

In spite of the quality of sushi, due to the short hours, lack of seating and drink options and relatively high price, I rate 3 out of 5 stars.