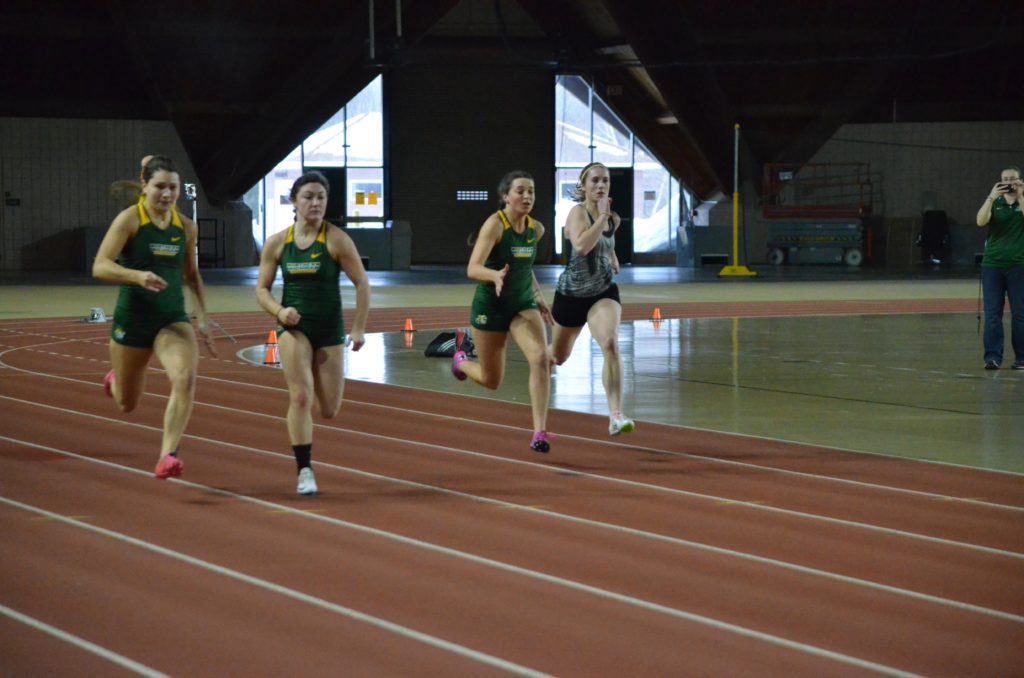 Members of the Northern Michigan University Track & Field team, including sophomore Isabelle Fritz, second on right, compete in a previous meet at the Berry Events Center. Photo by: Lindsey Eaton

With the whole team back and competing in the meet, head coach Jenny Ryan was impressed with how the team worked hard together for that finish.

“We definitely had a great meet all-around, a lot of good results from all of the athletes,” Ryan said. “With having some great competition, it was just a great meet for us to see where we’re heading [going in] to the conference meet.”

Not only did the team earn four total victories and four NCAA Division II provisionals, the team broke three school records as well.

“It was a good day overall. We had a lot of people set provisional marks, qualifying times for nationals, a lot of personal records for the season, so it was a great day for my team,” Huebner said.

Senior distance runner Kieren Becker recorded NMU’s first victory and provisional in the 1,500-meter run at 32:05, which ranks 29th in the nation.

Senior Vivian Hett also earned a provisional of her own, winning the 3,000-meter steeplechase at a time of 11:00. Finishing behind Hett was sophomore Hannah Torvi, timing in at 11:33.59.

NMU’s lone field event provisional went to senior Ine Mylle in the triple jump, landing a jump at 40 feet, 2 inches, moving her to eighth in the nation. The final victory went to junior Michelle Juergen in the high jump, winning by just 2 inches with a new season-high jump of 5 feet, 4 inches.

NMU track and field records were also rewritten during the classic. Along with earning a provisional and winning the 5,000-meter run, senior Kameron Burmeister became the first runner in NMU history to finish under 16 minutes in the race.

As freshman Nina Augsten finished third place in the 100-meter hurdles, she clocked in a new school record time of 14.54.

Despite finishing second in their event, the 4×400-meter relay team consisting of sophomore Sydney McPeters and juniors Huebner, Paige Dutcher and Lynsey Collins, who broke their own record by over a second as they timed in at 3:49.15.

“It was inspiring and motivating for me to do well because my teammates do well, and those records make me want to work harder,” Huebner said.

With the team idle this week, Ryan said the athletes will spend their time training along with splitting time for studying for final exams week.

“The training will be a little lighter this week because we’re trying to narrow down things we need to work on and let them recover with all the studying that they have to do,” Ryan said.

Dutcher said they’ll have the time to finish their finals and be on their way to compete in the conference meet.

“We actually get to take our finals early. It’ll be nice to get school out of the way and head down to GLIACs and see what we can do,” Dutcher said.

As a team, NMU finished second out of 18 programs with 113 points. GVSU took the team crown with 168.5 points, while Aquinas College rounded out the top three with 84.5 points.

NMU is seeking the conference crown in the GLIAC Outdoor Championships starting May 2 at Ashland University in Ohio.

NMU has one meet left before the GLIAC Championship.

“I’m looking forward to seeing some more provisional marks for my teammates and good competition from the other teams. Hopefully more school records come out of it,” Dutcher said.