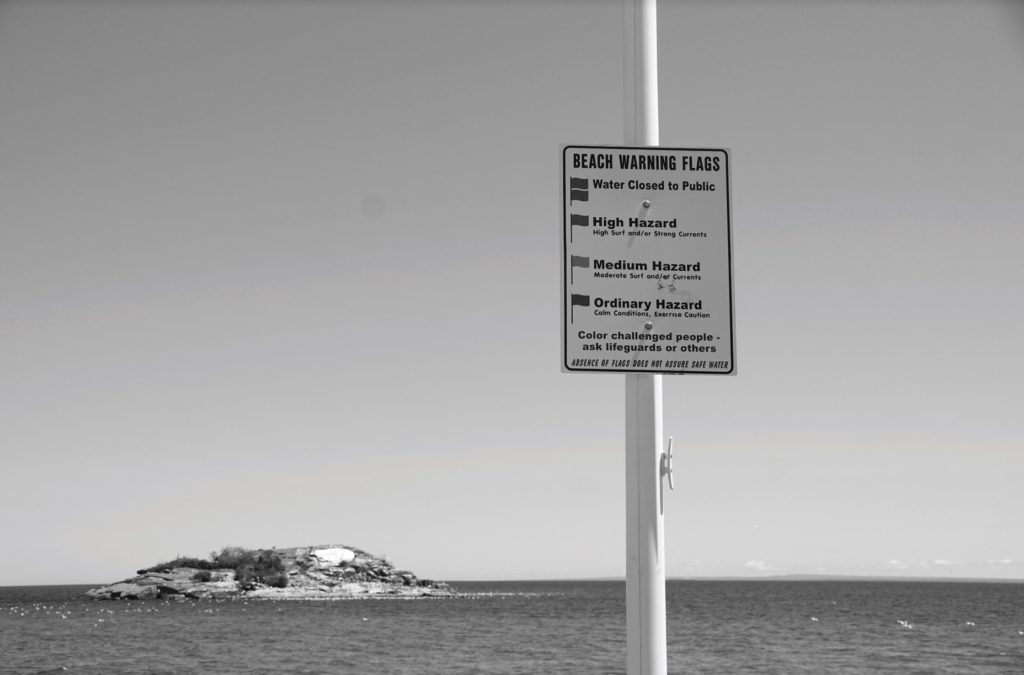 A sign depicting each of the beach warning flags along with their significance is displayed near Picnic Rocks off of Lakeshore Drive. Lifeguards recommend swimming in the lake only when the green flag is posted. Photo by: Kat Torreano

When going to the beach, people
usually think about bringing sun-
screen, snacks, lawn chairs and a
vibrant beach towel. The air is hot
and the only thought that comes to
mind is jumping in the water. As
refreshing as it may be, it’s important to think about how safe it is to
swim, especially in one of the coldest freshwater lakes known as Lake
Superior.

That’s why the Marquette City
Commission implemented a Waterfront Safety Task Force (WSTF)
back in August of 2010: to make
sure people stay safe while still enjoying Lake Superior’s waters. With
the help of the Marquette Fire
Department, some of Marquette’s
beaches are equipped with trained
lifeguards and the Flag Advisory
System (FAS), according to the
Marquette Waterfront Safety website.

With a staff of 21 lifeguards, the
team is trained well to brace the
waves this summer and make sure
newcomers like NMU freshmen
and even locals can make the most
of the season, head lifeguard Shea
Kinder said. As a lifeguard, she encourages people to follow the FAS.

“Being aware of the flag system
allows you to know the conditions
of the water. There are signs next
to the flag poles that say what the
flags mean,” Kinder said. “[But]
if you come down to the beach
and ask our guards why it’s yellow,
they’ll tell you. But it’s also nice to
just know.”

Whether people are experienced
swimmers or not, it’s important to
be “respectable” of the water because it can change at any time,
Kinder said. When the flags are
green, it’s okay to swim but when
they turn yellow, it’s best people stay
cautious, Kinder noted. Red means
the conditions are not good and
people should stay out of the water.

It may seem OK to hit the beach
when a yellow flag is posted, but
it’s vital to watch out for breaking
waves, currents and to also stay
away from breakwaters and river
outlets, Kinder said. Even though
the lifeguards do a good job looking out for everyone, she noted parents should still keep an eye on their
children because they’re usually the
closest to them.

“If you’re not swimming within
the lifeguard zones and the buoy
area, there are potential hazards
for rip currents,” she noted, adding,
“It’s best to stay on a beach that’s
lifeguarded. Those are safe swim
areas.”

Sometimes people downplay the
conditions of the water and don’t
realize there’s great risk involved,
especially the rip currents near Picnic Rocks, she continued. When
the waves are high, surfers think
it’s OK to go out but they should
be experienced and cautious of the
conditions. If people are drinking
alcohol, they should be mindful of
their decisions because they can get
“seriously injured” if they’re not
careful, she added.

“Water safety is important not
only everywhere, but especially the
Great Lakes because it changes daily. It can change by the hour and
people need to know what’s going
on,” Kinder said. “Keep in mind
that just because other people are
swimming does not mean that you
should. If you don’t believe you’re
a good swimmer, don’t start off in
Lake Superior or anywhere that’s
not within the buoys.”

If people are in a situation where
a lifeguard is not around and someone needs assistance, it’s best to call
911 and wait for first responders,
Kinder said. People should not enter the water if they feel unsafe, she
added.

For more information on the
FAS, visit the Waterfront Safety
website at https://www.marquette-mi.gov/departments/fire/water-front-safety/.