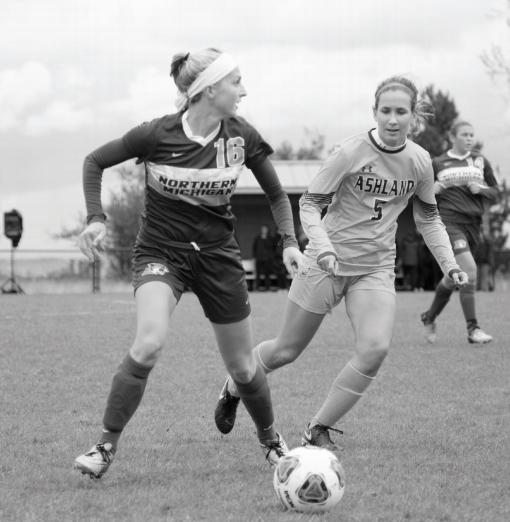 Senior forward/midfielder Aimee Colla looks to pass the ball ahead to a teammate in a previous game last season against Ashland. Photo by: Neil Flavin

season and finishing in seventh
place out of ten teams.

The Wildcats are looking to

put goals on the board, something that was hard to come by

a season ago. In 17 games last
year, Northern Michigan only
managed to find the back of the

the Wildcats are serious about
competing in a tough GLIAC
conference.

returns as the leading scorer for
the team after finishing 2017

with eight goals. Halonen started every game a season ago and

tallied two assists to finish with

look to Halonen to put points up
but she can’t be the only scorer
on the tally sheet again.

Joining Halonen on offense is
senior attack/midfielder Aimee
Colla, who will have a deeper
role now that graduated senior
Allyssa Milam is gone. Colla

shots a year ago and put eight of
those on-net. The emphasis for
coach Basma has to be offense
and where that will come from.

Defensively for the Wildcats,

Frontuto returns looking to improve heading into her second

a respectable 1.62 goals-against-average, letting in 28 scores

Seniors Sophia Sachs and Raven Mitchell hold down the back

Northern Michigan is coached
by Sonia Basma who took over
head coaching duties before the
2017 season.