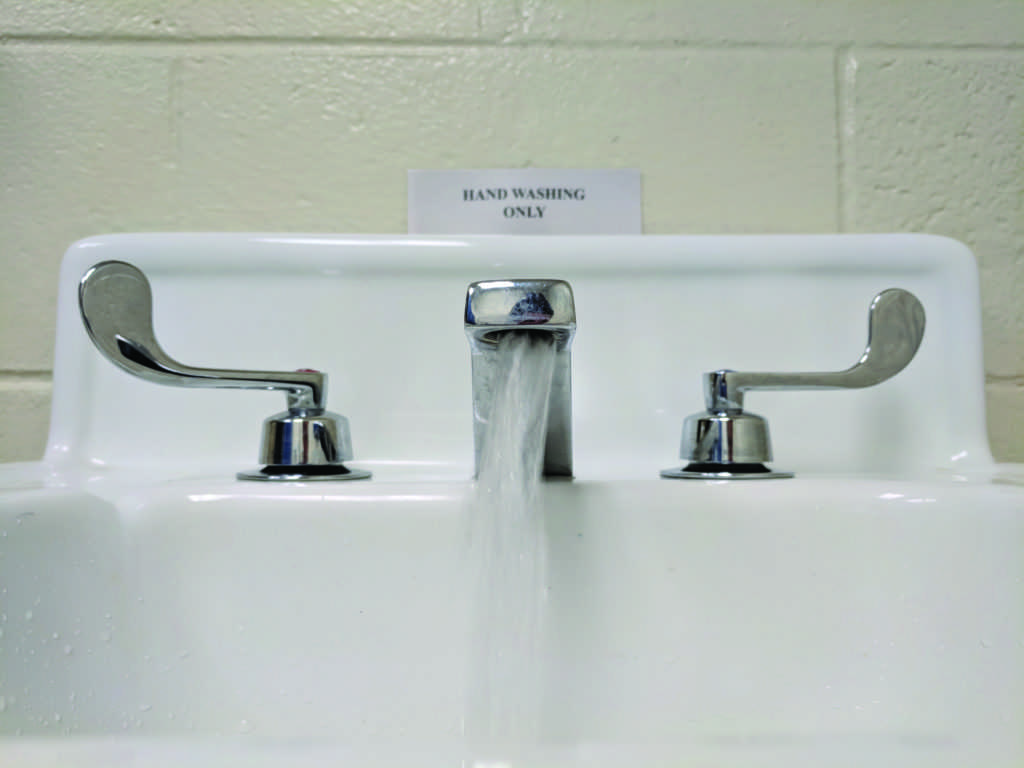 A sign designates a sink in a Thomas Fine Arts bathroom to just hand washing. Sinks and water fountains in this facility, the PEIF and the Learning Resource Center were found to have high levels of lead after multiple rounds of testing were conducted by university officials and consultative groups. Photo by Tim Eggert

Following two months of comprehensive and collaborative mitigation efforts between university officials and independent environmental consultants, 50 water sources across three campus buildings have been ruled “safe for consumption” after they first showed signs of lead-contamination in May.

Specifically, 30 new drinking fountains and 20 new filters on existing water features have been installed across the PEIF, Thomas Fine Arts and the Learning Resource Center (LRC).

The three buildings were initially closed on May 16 because precautionary testing of water sources in each facility resulted in inconsistent lead level readings. Hundreds of samples were collected and sent to independent laboratories.

Although returned results indicated that each building hosted water fixtures that tested over the Environmental Protection Agency (EPA) action level of 15 parts per billion for lead, it was unclear which individual fixtures were over the threshold, Richards explained.

“One fountain would test high but another a few feet away would test fine,” she said. “The tests varied because some fixtures were newer than others and we couldn’t guarantee that an older one meant higher levels.”

Water that tests at the 15 parts per billion level, although safe for washing, flushing and showering, is not safe for drinking, according to the EPA.

In compliance with EPA recommendations, the university labeled all water sources in the three buildings as “non-potable,” shut down drinking fountains and supplied bottled water to those on campus. Individual fixtures that tested high were also targeted for comprehensive investigation.

“We brought in multiple consultants to determine the best course of action,” Richards said.

One engineering and environmental consultative group, TriMedia Environmental, found that the main water source to each building was not the cause of the lead contamination, she added.

On June 6, NMU partnered with consulting company Mannik Smith Group to develop and implement a more efficient method of diagnosing the source of lead. The group prioritized “as-built” water systems in the buildings, such as water lines and internal pipes, to narrow down potential contamination sources.

According to a university-released update released after the partnership, the group utilized an x-ray fluorescence spectrometer to determine that elevated lead readings were the result of connections in some water lines within the three buildings.

“Over time, we’ll replace plumbing and water lines, but we needed to immediately address the issue and get something in place before students returned to campus,” Richards said.

As of publication no additional campus buildings, facilities or residence halls have tested positive for high levels of lead, however, some water sources in the PEIF, Thomas Fine Arts and the Learning Resource Center remain non potable.

Richards noted that locations within each building with potable water have been labeled just as those which are not appropriate to consume have been identified.

“People should only take water out of locations that are noted as safe to do so,” she added.