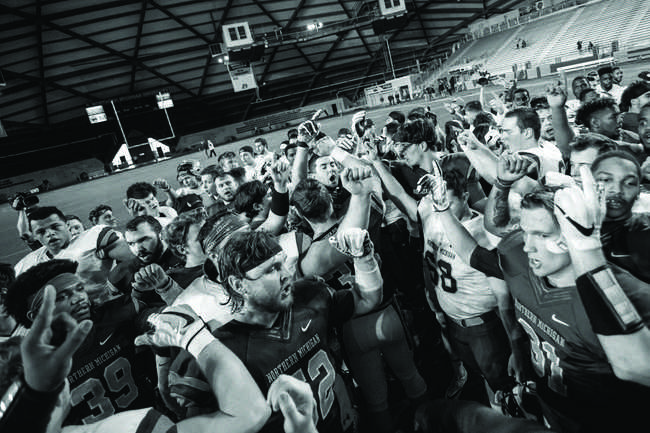 Men’s football wrapped up training camp last week and looks ahead to the 2018 football season, its second under under head coach Kyle Nystrom. The team finished the 2017 season with a 1-9 record, and intends to reidentify itself through a non-conference season opener against McKendree University this Saturday, Sept. 1. Photo courtesy of NMU athletics

The Wildcats finished with a 1-9 record in 2017 and are looking to get their season off to a good start against the Bearcats as the teams meet for the first time in program history. McKendree recently made the transition to NCAA Division II football before the start of the 2012-13 season.

“It was a good practice (this week) but I just don’t know how things are going to be,” Nystrom said. The team should be vastly improved this season, with the Wildcats starting several freshmen at one point or another last year.
Retention of those young players has been a main goal for Nystrom, and so far it’s been working with 21 sophomores on the roster this season.

One of those sophomores is quarterback Ryan Johnson. The DePere, Wisconsin, native started in eight out of ten games last season, leading the Wildcat offense with 1,581 yards through the air and nine touchdowns. Johnson made his debut against Davenport, leading the Wildcats to their lone win of 2017, a 24-14 homecoming victory.

Johnson has improved in the off-season and will likely be the starter in Saturday’s contest, but also has a second option under center with sophomore Latrell Giles, Nystrom said.

“Johnson will be the starter,” he said. “But you can put Giles in there too. They’re both different.

Looking to lead the Wildcats on the ground will be senior running back Jake Mayon. The GLIAC-leading Mayon ran for 1,377 yards and eight touchdowns as a junior and also ranked among the best running back’s in the country, finishing 10th overall in Division II rushing yards in 2017.

Mayon said he and his teammates have a lot to prove after last year.

“It’s just about trying to stay focused and lead the team the right way,” Mayon said. “We have a lot to prove this year of course. Coming off of a 1-9 season we have to show we’re not that team anymore.”

Asked if Mayon has improved individually in the off-season, he believes that there is no such thing as a true off-season.

“If we’re the same as we were last year individually then we didn’t do our job,” Mayon said. “Every off-season is meant for us to get stronger, faster and better mentally and just staying focused all year. I always believed it was a 12-month season because honestly that’s what you have to do throughout the year is day-in and day-out, put in the work for weekends like these. These are big games coming up for us, we have a lot to prove and we’ve been thinking about this all year.”

As for the game plan on Saturday, Nystrom expects his defense to step up.

“You’ve got to control the game with the offense and you can’t give up big plays on defense,” Nystrom said.

“It’s not going to be perfect, it never is the first game. But we can control the ball, manage ball control, manage the clock, rush for 150, throw for 150, be balanced, not take a bunch of penalties and have ball security.”

Nystrom also added that it’s important to keep expectations for this season manageable from a fan’s perspective.

Kickoff for NMU versus McKendree from Lebanon, Illinois, is scheduled for 2 p.m. CT on Saturday Sept. 1.

For fans unable to make the trip, a live broadcast of the game can be found at www.glvcsn.com/mckendree.