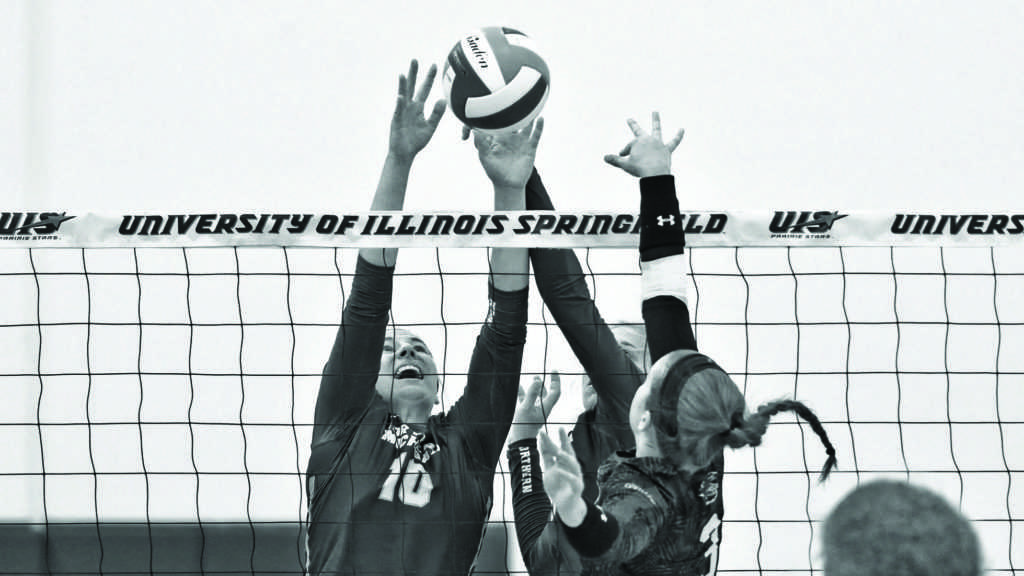 NMU athletics/NW Sophomore outside hitter Leticia Antunes rises up for a spike during the University of Illinois at Springfield Capitol City Tournament last weekend. Antunes finished the weekend with 50 kills, which tied her for second most on the team for the weekend.

The Northern Michigan University Volleyball team has charged out of the starting gate with a perfect 4-0 record after their domination at the University of Illinois at Springfield Capital Classic Tournament last weekend. The Wildcats, who played two games each on Friday and Saturday, are off to their best start since the 2010 campaign in which they went 17-0 to begin the year and went on to qualify for the NCAA tournament.

“I am very happy with the way the team performed,” said NMU head coach Mike Lozier. “While we didn’t play super clean volleyball, we showed glimpses of a team that could be great. You also can never de-value the opportunity to go 4-0 against four teams in our region.”

The Wildcats’ defeated McKendree University in the first game of the Friday doubleheader, winning three sets to one, with two players, senior outside hitter Autumn Monsma and sophomore outside hitter Leticia Antunes recording double-doubles. Their second game, against Walsh University, saw NMU sweep their opponents three sets to none. Monsma added another double-double performance.

Northern played Cedarville University on Saturday, putting up a three sets to one scoreline and, with the 3-0 record to start the season, their best performance off the blocks since 2010. Antunes and senior setter Lynzi Svoboda each put up double-doubles in this match as well.

NMU’s final match of the tournament pitted them against the hosts, the University of Illinois-Springfield. In what was clearly the toughest test for the Wildcats, the match went to a fifth and deciding set with NMU winning sets one and two by scores of 25-19 and 26-24, respectively, before dropping the next two 25-21 and 25-22. Illinois-Springfield was up 8-2 in the final set before Northern stormed back to win 15-13.

“I am very happy with the way we competed,” Lozier said of his team’s performance. “It takes a great deal of composure and heart to pull off comebacks like that, and we showed it. While there are always skill improvements that can be made, it’s the intangible quality that they showed that will help us get some big wins.”

NMU senior outside hitter Maggie Liebeck was named Tournament MVP on the back of an impressive performance which included the game-winning kill in the final game of the tournament.

“She did a wonderful job,” Lozier said in reference to Liebeck’s play. “I was very happy to see that she received tournament MVP honors. Collectively, as a team, I was pleased with our performance. Monsma and Antunes also had great weekends.”