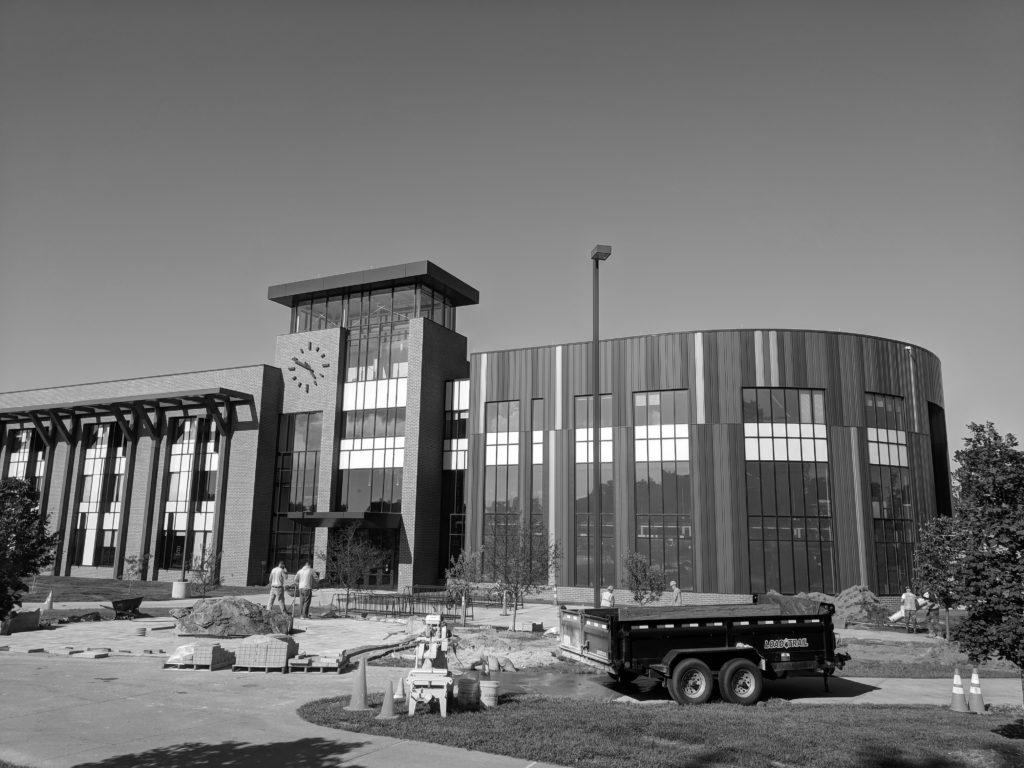 Construction workers prepare the foundation for the new wildcat statue set to be unveiled at 3 p.m on Friday, Sept. 21. The bronze wildcat was made possible through a gift from the estate of former NMU Board of Trustees chair Gil Ziegler. Photo by Tim Eggert

In the first few weeks of classes, NMU students entering Jamrich Hall from the west side of
campus watched the progress of the new bronze wildcat sculpture that will be unveiled next week. With the workers putting in long hours
under the sun and rain, their work will be appreciated by the U.P community.

“This statue is going to be iconic,” said NMU Director of Facilities and Campus Planning Jim Thams. “It is going to represent you and I as Wildcats here at Northern Michigan University.”

The statue was made possible through a gift from the estate of former NMU Board of Trustees Chair Gil Ziegler, the NMU News Bureau stated. The statue is continuing preparation on its shipment, but the base of where it will reside has been mostly completed. Rain from the previous week caused minor setbacks, but Thams has said it has not deterred their goal, and still expects to finish the project on time. A rusty
red-colored rock that is indigenous to the area was chosen to be the base of the statue. The rock was chosen for its size initially, but after seeing it was unique to the area, Thams said it felt fitting to use the rock kono dolomite as the pedestal to hold the college’s mascot.

The statue was commissioned to inspire a sense of pride for the university, he said.

“The sculpture symbolized the university’s athletic mascot as a tradition for the university. It is to be touchable, dynamic and majestic,” Thams said. “It must reflect not only dignity, but qualities such as power, strength, vigilance and cunning. It must inspire a sense of pride and project a strong image of the university.”

The wildcat will be 12 feet long from tale to nose and stand at around 4 to 5 feet high. This symbol of pride will be intentionally displayed in front of Jamrich Hall.

“It is a place to hold small special events,” he said. “The cat is placed to greet everyone coming into the academic hall.”