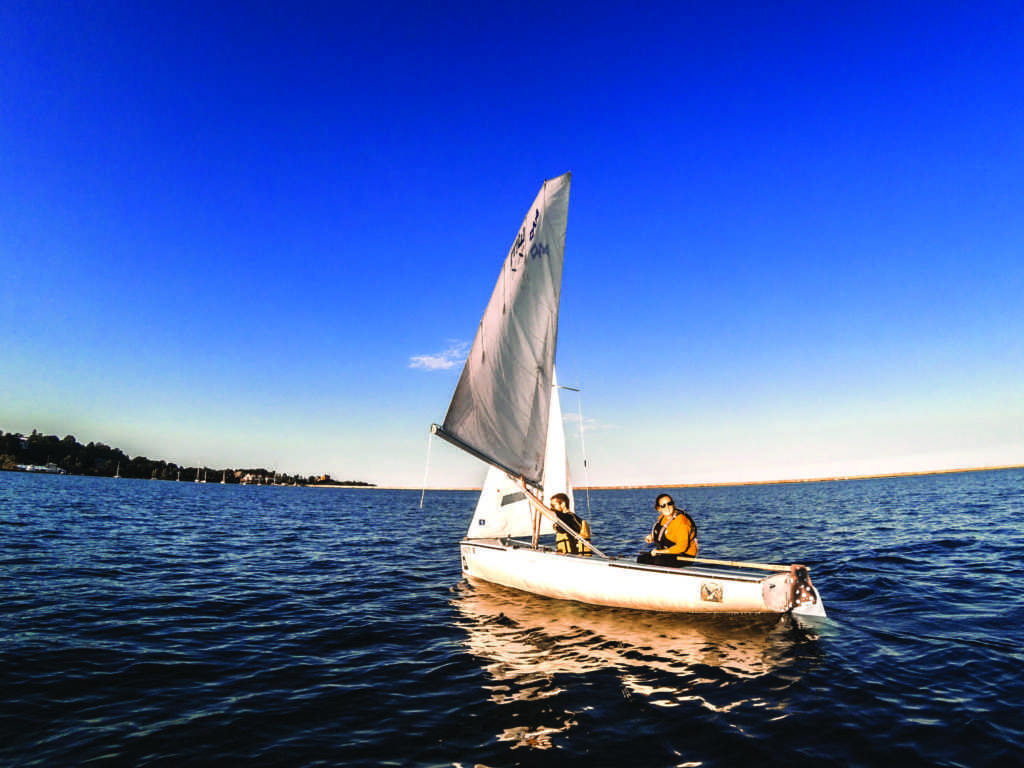 The breeze picks up as the sun peeks through the clouds and two sailboats cut through the aqua–colored waves on Lake Superior at Lower Harbor. The two sets of sailors simultaneously shift their weight as the boom moves right, balancing the boat to perform a tacking maneuver. It’s a Wednesday afternoon meeting for the NMU Sailing team. The 7-knot wind is ideal for the 420E boats, which are the overall length of 4.2 meters and designed to plane easily with a large sail-area-to-weight ratio.

They turn the bow of the boat–left then right, with the rudder while facing windward. The NMU Sailing team is practicing maneuvers like this for its upcoming regattas in the Inter-Collegiate Sailing Association (ICSA).

The team is co-ed with eight members who come from all around the
Superior Set sail on Superior with the NMU
Midwest. Hannah Milkie, team commodore and senior graphic design and philosophy double major, has four years of collegiate sailing experience and grew up sailing on Lake Superior.

“We are one of the only teams in the entire sailing conference that gets to practice on a Great Lake. The beauty says enough for itself,” Milkie said. “With
the small two-person boats, any white caps on Lake Superior means it’s way too windy to sail. You just have to be careful because it’s a really dangerous sport, but
it’s also a lot of fun.”

This past weekend, University of Wisconsin-Madison kicked off the season hosting the “Fall Fury” on Lake Mendota. The Midwest Collegiate Sailing Association (MCSA) has two divisions across the Midwest made up of colleges from around the Great Lakes. There are four two-day regattas for the Wildcats in the fall
and spring season.

The team always welcomes new members. It will host an event at the Marquette Yacht Club for anyone who wants to try sailing, from 5 to 8:30 p.m. on Thursday, Sept. 13. There will be a barbeque and opportunities to go out on some larger boats with volunteers at the Yacht Club.

“If you think you’re not good enough to be on the sailing team, that’s totally not true,” Milkie said. “Even if you have never sailed before but it interests you, just come down [to Lower Harbor] and we’d love to get
you out on a boat.”

Members of the team also run the NMU Sail Club. They encourage students with all sailing abilities to come sail with them at 6 p.m. on Wednesdays by the Yacht Club.