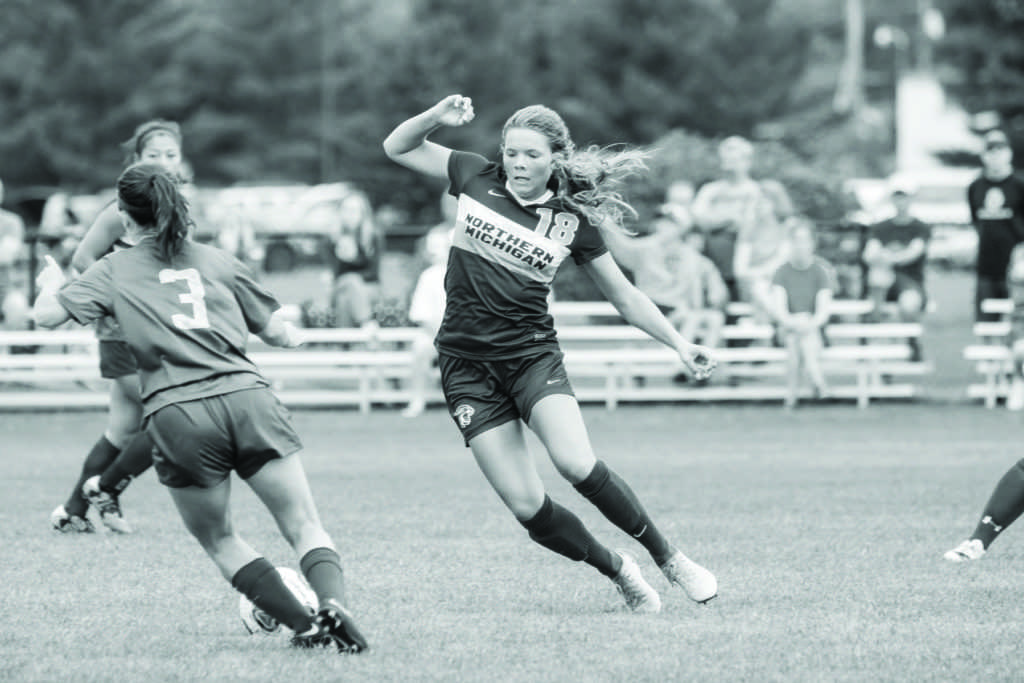 Freshman midfielder Caroline Halonen makes a play on the ball in a road contest last weekend. The 1-2-1 team will take on Purdue University-Northwest and the University of Wisconsin-Parkside this weekend. Photo courtesy of NMU athletics

The Northern Michigan University Women’s Soccer team took on the Screaming Eagles of the University of Southern Indiana (USI) Thursday, Sept. 6, at a neutral site in Hammond, Indiana, and played to a 1-1 tie. Following the draw NMU traveled to Lewis University (LU) Saturday, Sept. 8, to take on the Flyers. The Wildcats lost 1-0.

Northern started fast against USI when freshman forward Rachael Erste scored in the 10th minute. Junior defender Gaelin Hirabayashi assisted on the goal, recording her first point of the season. Erste is the second Wildcat freshman to score a goal this season, joining forward Taelor Moore.

At the half, the Wildcats had a 1-0 advantage and held a 6-3 shot advantage. The Screaming Eagles failed to register a shot-on-goal until the 42nd minute of play.

Both teams found their offensive rhythm in the second, combining for 16 shots, 10 of which were on goal. The Wildcat defense held strong for the majority of the game until the 87th minute of play, when USI tied the game at one. With the game tied at the end of regulation, both teams prepared for extra time.

Neither team created many chances in the first half of extra time. There were two shots taken in the first ten minutes of overtime, both taken by the Wildcats, with one shot coming on goal.

Southern Indiana outshot the Wildcats in the second half of extra time, 2-1. Despite 31 total shots in the match, with 19 coming from NMU and 12 from USI, neither team was able to find enough separation from the other. As a result both teams earned a point from the draw.

On Saturday against Lewis University, the game’s only goal came in the 19th minute off a penalty kick from the Flyers Kailey Parnello. NMU commited the costly foul in the 18-yard penalty box area, resulting in the free kick. Despite 14 combined shots in the opening half, the Wildcats went into halftime down 1-0. Lewis held a 9-5 shot advantage going into the break and had a 4-1 shots-on-goal advantage.

LU kept Northern off the board in the second half, holding the 1-0 lead to the final whistle. The Wildcats were outshot 16-8 in the match and only put two shots-on-net while the Flyers put six on target.

Sophomore goalkeeper Brianna Frontuto started in goal for the Wildcats for the fourth consecutive game. Frontuto made four saves in the first half and added two more saves in the second half. So far this season, Frontuto has recorded 22 saves and has a save percentage of .815, a goals against average of 1.18 and 1-2-1 record.

NMU travels to Purdue University-Northwest Friday, Sept. 14, and will finish the roadtrip against the University of Wisconsin-Parkside at 1 p.m. Sunday, Sept. 16.