Heads turned all over the country when Northern Michigan University announced the opening of the medicinal plant chemistry major. After the increasing number of states and medical organizations legalized the usage of cannabis, the demand for knowledge on how to utilize plants has increased. This major teaches students how to safely produce, analyze and distribute medicinal plants. Being the first of its kind in the United States, one has to wonder, who are the students that have decided to pursue this major? 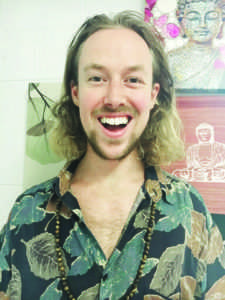 Johnny Trevitt rode the California surf to NMU as a junior transfer student to seek medicinal plant chemistry research benefits. This major convinced him to return to college after dropping out, Trevitt said.

He seeks to focus on psychedelic medicine for people with post-traumatic stress disorder (PTSD) and researching plant oils for health benefits. Specifically, he wants to see veterans with PTSD achieve the help that has been proven to work for them, Trevitt said.

“I want to benefit humanity and this is the route I am going to take,” Trevitt said.


With the Dakotas in her rearview mirror, junior Aleysia Burgard transferred from Fargo to study in the medicinal plant chemistry major. Burgard has been interested in plants since she was a child while gardening with her aunt. Burgard said she’s looking to research the benefits of several plants, including cannabis, that have been proven to ease children’s pain during illnesses and hopes to provide a cure.

“As soon as I heard of NMU’s program, I wanted it immediately,” Burgard said. “NMU is the opportunity I have to help those who could benefit from the program.”


Traveling over 1,500 miles from San Antonio, freshman Alek Harmeyer came to NMU to obtain knowledge of the field and enter the cannabis industry, Harmeyer said. He is hoping to see cannabis decriminalized on a federal level to be used for medicinal purposes. Harmeyer said he chose NMU because research is taken seriously and more specifically, NMU’s lab equipment makes it easy to see the research up close.

“It was an instant yes for me during the tour,” Harmeyer said.

He also understood the stigma left upon the class given its research into cannabis, but he said the best thing to do is to focus on classes.

“Worry about learning the actual classes and research because they are hard and are only going to get harder,” Harmeyer said.


Adam Sanchez is quite familiar with the breeze of a Great Lake blowing towards him off of Lake Michigan in Chicago. Now a new lake breeze greets him off the coast of Superior as he pursues the NMU-exclusive major. Sanchez, a junior transfer, said his ambition to study in this field comes from his love of plants in general, but also to improve dispensaries in the United States. Sanchez saw NMU as the only opportunity to chase this dream, he said. While at NMU, Sanchez has noted the differences and similarities between those in this major and other majors.

“A lot of us might be different to other students,” Sanchez said. “But we’re not as different in a lot of ways. We work hard and love the outdoors like all of you.”


Seeking to help those in pain from cancers and mental health problems, junior transfer student Alexander Schoenhardt from Rockford, Illinois, had NMU
in sight.

“Cannabis could help those addicted to
opiates. The benefits outweigh the negatives, and I think those under the influence of [cannabis] rather than [opiates] are easier to rehabilitate,” Schoenhardt said.

Some people could abuse the substance of cannabis, but there are a multitude of benefits awaiting through research, he said.

“Don’t be scared of it,” Schoenhardt said. “Don’t run from it. When used correctly medicinal plants have intricate value.”