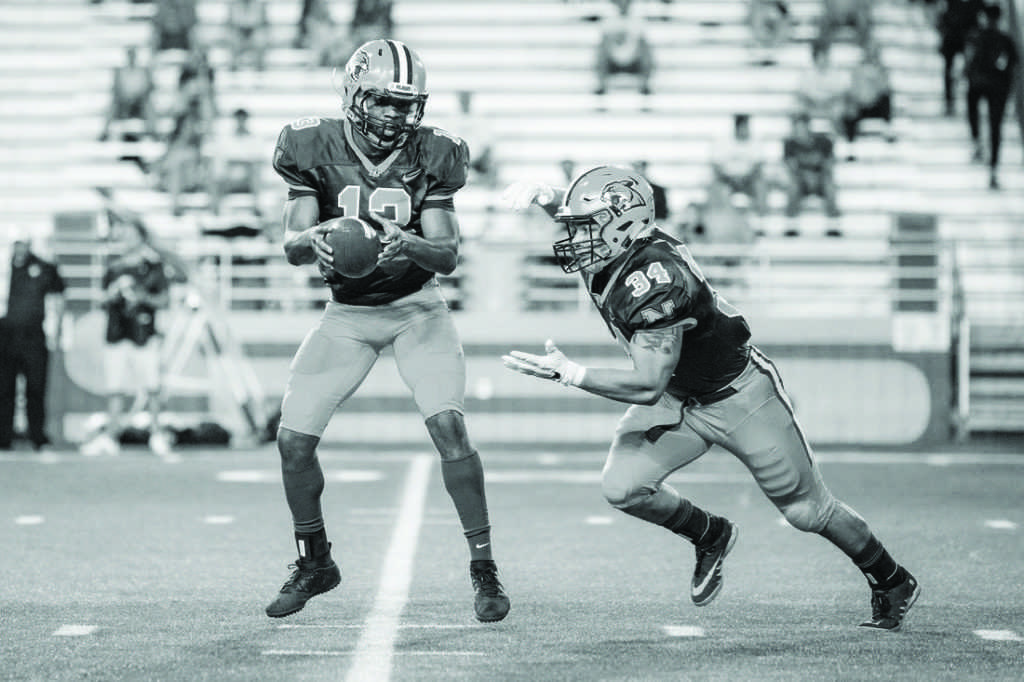 Sophomore quarterback Latrell Giles hands the ball off to senior running back Jake Mayon. Giles rushed for 65 yeards while Mayon struggled on the day to finish with 37 rushing yards. Photo courtesy of NMU athletics

Things weren’t easy for the Northern Michigan University Football team last weekend and things won’t be any easier moving into next week.

NMU head coach Kyle Nystrom said the GVSU defense got to his team early and often, taking away any chance of an up-tempo offensive attack.

“Their offense was good and their defense was even better,” Nystrom said. “They’re good enough to beat us to the point of attack. We didn’t block them, they stifled the run game and they were all over the quarterback (Giles) in the passing game. When they weren’t all over him, they had him all shook up and we lost our poise in the pocket.

“They’re dominant on defense and dominant everywhere. Up front particularly, more than I’ve ever seen them. I’ve played them six times in four years and they’ve always been good, but they were a level better right now.”

The Wildcats got off to a slow start, finding themselves down 27-0 early in the second quarter and not managing a first down on offense until the 6:03 mark of the first half.

NMU finally cracked the scoreboard with 38 seconds remaining in the half when senior running back Jake Mayon took the ball into the end zone with a two-yard rush on first and goal. Freshman kicker Daniel Riser’s extra point made the game 27-7, which stood as the score at halftime.

GVSU received the ball to begin the second half and moved quickly, going just seven plays downfield when Lakers senior quarterback Bart Williams found senior wide receiver Nick Dodson for a 28-yard touchdown pass on 3rd and 12. The extra point made the score 34-7.

The Wildcats added one more touchdown in the game on a QB keeper from Giles who took a three-yard rush to the end zone on 2nd and goal with 7:37 to play in the third quarter.

Mayon finished with 37 yards rushing while sophomore wide receiver Dallas Dixon had four catches for 59 yards.
Williams finished 17-of-28 with 280 yards and four touchdown passes for GVSU while Dodson had eight catches for 129 yards and two touchdowns.

As the Wildcats transition to homecoming week, they welcome No. 6 Ferris State University (3-0, 1-0 GLIAC) to the Dome on Saturday. The Bulldogs bring in the No. 3-ranked offense at the Division II level, notching over 500 yards of total offense in all three games played so far.

Despite a challenging opponent for the second straight week, Nystrom said it’s a learning experience for all.

“That’s what happens when you play the No. 5 team in the nation,” said Nystrom. “We’re not in the top five, but you learn from that. You get tougher because of it because it irritates you, and we’ll be better down the road because of it. Sometimes it’s okay to be motivated because you’re really irritated. Sometimes it takes anger to get motivated.
“Either way, I want an edgy football team this week. I want them to be on the edge,” Nystrom said. “As long as we can do things right, that’s what I want to see this weekend.”

Hanson said it felt good to emerge as a leader on defense last week and hopes for a good outing on Homecoming weekend.
“It feels good,” Hanson said. “I’m hoping we can play better this week for homecoming. Make some big stops, big plays and if we can keep doing that then we’ll play good and feel good.”

Current NMU students are invited to tailgate with Simply Superior, with food available with a meal plan swipe.
Kickoff is slated for Saturday, Sept. 22, at 4 p.m., from the Superior Dome.