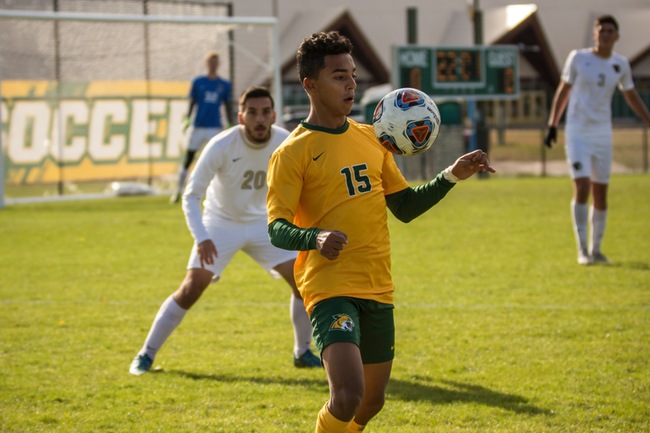 The Northern Michigan University Men’s Soccer team opened up conference play with a weekend home sweep, to extend their win streak to four games with victories over the Davenport University Panthers and the Purdue Northwest University Pride (PNW).

The sweep helped the Wildcats into the national rankings for the first time in program history and the team is feeling pleased about stepping up at the right time.

“It is a good place to be (at) this time of the season, but what got us those results are the more important thing,” said head coach David Poggi. “We are starting to gel as a team and starting to learn what our strengths and weaknesses are.”

Junior midfielder Edgar Astorga is pleased to see that the team is coming together.

“It’s good to see our patience and hard work starting to pay off,” said Astorga. “We have good team chemistry and that shows on the field.”

NMU got the opening goal of the match with Astorga scoring off a pass from junior midfielder Callum Olpin in the 18th minute. Olpin added a goal of his own later in the first half on a cross pass from senior forward Sam Popp. Popp’s first assist of the season makes it his seventh point in NMU’s first four games.

Olpin’s big weekend continued against PNW as he netted the first goal of Sunday’s game for NMU in the first half. The Wildcats scored a couple more goals eleven minutes apart, including the first career goal from sophomore midfielder Luca Lippert. Senior defender Kevin Hoof also scored in the half for his first goal of the season to grow NMU’s lead to 3-0 at halftime.

Kliebe and Restum’s performances have impressed the team the most, especially Astorga, who said the team have benefitted from their presences on the field.

“They have shown a lot of discipline and they have about outstanding for us,” Astorga said. “Especially since they’re freshmen, it’s going to help us in the long run.”

The 22nd-ranked Wildcats have a home-and-away series this homecoming weekend as they host the Viterbo University V-Hawks Friday, Sept. 21, at 1 p.m., before traveling for a matchup on Sunday, Sept. 23, at 1 p.m at the University of Wisconsin-Parkside.

Poggi said he has no prior knowledge of their next opponents, but believes they will be prepared to play.

“Viterbo should be a good game for us and we’re looking forward to facing them,” said Poggi. “Parkside is a new conference opponent, so it’ll be a good battle.”